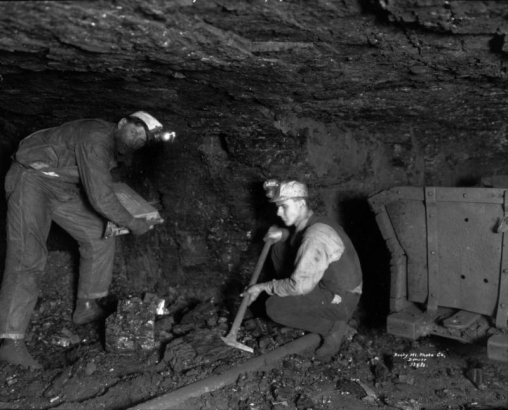 The canary in the coal mine has long been a metaphor for early warnings, but for actual coal miners those birds were a matter of life and death. In Colorado coal mines, however, the canary wasn't an actual canary. Most of the time, Centennial State miners relied on mice to perform the functions normally carried out by coal mine canaries.

Before we discuss the unusual relationship between mice and men in the subterranean world of the Colorado coal fields, it's worth looking at how animals became alarm systems warning miners of impending danger. The story of the canary in the coal mine starts in the late 1890s, with the work of John Scott Haldan (aka, the father of oxygen therapy).

Haldane's research showed that canaries, which can fly quite high, were extremely sensitive to pollutants and poisons in the air. This was due, in part, to their ability to take in extra air through specialized air sacs for high altitude flight. In short, canaries take in about twice as much oxygen as other small animals, such as mice, and are the perfect specimens for detecting poison gas in coal mines, according to Smithsonian Magazine.

Shortly after Haldane's discovery, canaries were deployed in mines throughout Britain to great effect. Canaries were so successful in ferreting out mine dangers that they were used well into the 1980s.

But canaries were not commonly found in the Colorado coal fields.

According to Thomas G. Andrews' tour de force of Colorado coal mining history, Killing for Coal (Harvard University Press, 2008), pack rats and house mice made their way down mine shafts following the trail of feed left behind by mine mules. Once established in the depths of the mine, a single female mouse can breed 150 babies in a single year. Those mice colonies wound up relying on miners' lunch pails for their meals.

While the thought of being trapped in the depths of a dark mine with thousands of mice might make contemporary skin crawl, the miners found great comfort in the creatures. For starters, the mice were in fact quite sensitive to changes in the mine's air, known as "damps". When the mice appeared lethargic, the miners knew trouble was afoot.

Colorado mine mice also had a quality that traditional mine canaries didn't - extremely good hearing. When the mice scattered unexpectedly, it could mean that mine timbers had snapped somewhere in the shaft, or that a roof cave-in was imminent.

With mice and men operating in such close quarters, it's not surprising that the two species formed some tight bonds. Many a miner came to befriend mice and even took to naming and feeding them. At mealtime, the miners frequently shared their lunches with the rodent friends.

Andrews suggests that the mice may have reminded the miners of bygone days in the rural villages of their homelands. He also points out that the little mice brought a ray of light and life to the otherwise dark and extraordinarily dangerous mines.

There's no question that Colorado mice were incredibly important to Colorado miners and performed as well - or maybe even better - than coal mine canaries.

Thanks, Pat. The book also spoke quite a bit about the mules the miners used to haul coal up from the mines. I had never thought about the resources it took to maintain large amounts of them...and the challenges of working with pack animals in confined spaces. "Killing for Coal" is a tremendous book that really reshaped the way I think about Colorado history.