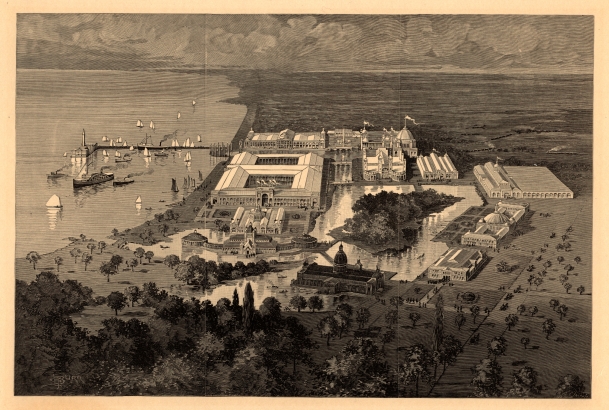 The 1893 Columbian Exposition, also known as the Chicago World’s Fair, was a spectacle of previously unseen technological and cultural entertainment. The Chicago Fair introduced Americans to everything from indoor electrical lighting to Crackerjack candy. It also advanced noxious cultural viewpoints, such as racial chauvinism and the “inevitable closing of the American Frontier” thesis, posited by Frederick Jackson Turner during a famous lecture at the Fair.

As a fledgling state with only seventeen years to her name in 1893, Colorado was eager for her state pavilion and exhibits to make a mark on the global stage. The era's statewide press coverage reads to our eyes today as somewhat insecure posturing, mixed with eagerness and a determination to impress. Colorado indeed brought her most notable ideas to Chicago, but also brought examples of unenlightened viewpoints on the state’s original inhabitants: Native Americans. 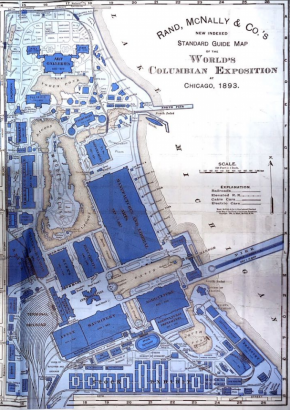 World's Fairs in general are a fascinating phenomenon. Hosted by a different city every few years, the fairs began in London in 1851 and continue as "World Expos" today. They provide an opportunity for countries to introduce themselves—in all their strengths and quirks—as they’d like to be seen. World’s Fairs were global marketing opportunities before the existence of multinational advertising agencies, or even mass communication technologies such as radio. They offered a panoply of ideas and products, culture, commerce, and entertainment, all happening in one spectacular moment in time.

The Chicago Fair in particular took place at a time of industrial and technological explosion, and served as an early incubator for twentieth century material and popular culture. A partial list of products and ideas the Fair introduced include electric lighting, belly and hula dancing, the first movie theater and amusement park, the Ferris Wheel, the first fully electrical kitchen and dishwasher, and spray paint (the latter was invented to expedite preparation of the “White City” fairgrounds, as they came to be known). 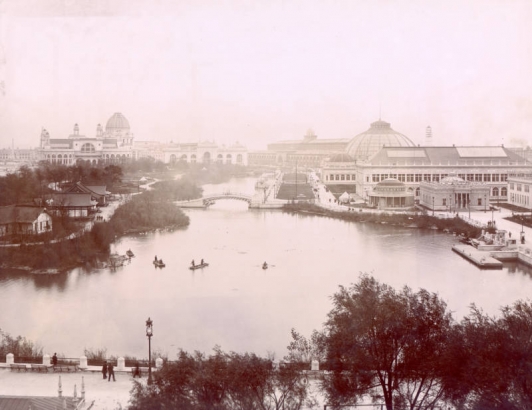 The theme for the Chicago Fair, the “Columbian Exposition,” was meant to honor the 400th anniversary of Christopher Columbus’s first voyage to the Americas. A highlight of the Fair featured the arrival of full-scale replications of the Pinta, Niña, and Santa Maria, which sailed across Lake Michigan to the fairgrounds’ harbor. 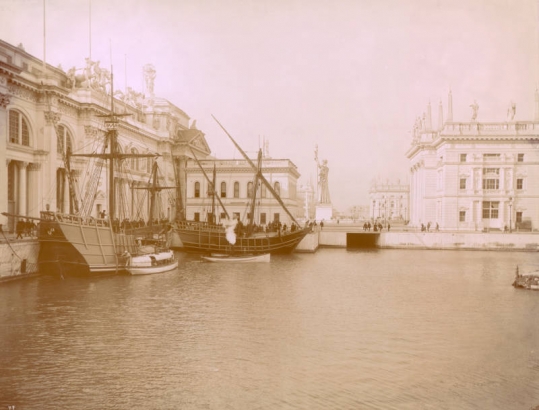 [1893]
Spanish caravels Niña and Pinta at the Chicago World's Fair

Students of iconography will be interested to learn that the images featured on tickets to the Fair featured the visages of George Washington (it was, after all, an American Fair), Abraham Lincoln (one set in the Land of Lincoln), a Native American man (uniquely American), and Christopher Columbus.

So what did Colorado bring to Chicago in 1893? To contextualize our contributions, it’s important to first revisit what life in this new state was like at that time.

Having gained statehood just seventeen years prior, Colorado had a population of little more than 412,000, and an economy primarily supported by silver and mineral mining, and agriculture. In Denver, the Fair predated and indeed inspired Mayor Speer’s “City Beautiful” movement. Most of the design-focused city planning efforts of our small, dusty town were yet to come.

In the year of the Fair, Colorado men would grant Colorado women the right to vote, in the first such popular referendum. And by the closing months of 1893, the repeal of the Sherman Silver Purchase Act would devalue silver drastically, decimating one of our primary industries and sending the state reeling into economic crisis.

Racial tensions and efforts to push Native Americans out of their ancestral homelands, and “settle” this Wild West, still defined much of the region. In addition, the area now known as Mesa Verde National Park, which featured ancient homes and other structures built by Ancestral Puebloans, had been “discovered” by the settler Wetherill family just 5 years prior, in 1888. 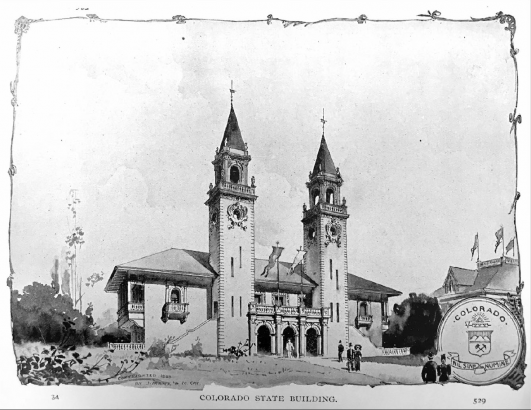 From World's Columbian Exposition, Chicago, 1893, by White and Igleheart
Colorado State Building at the Fair

Each of these salient parts of Colorado’s experience in that moment in time were represented at the Fair. The Colorado State Building featured displays of our fair state’s agricultural wealth in the form of grasses, fruits, and grains; and Colorado was noted as one of the five top significant contributors of ore, gold, and other minerals shown in the Mining Pavilion. A Colorado engineer contributed an electrically-animated diorama of the interior workings of a mine that was endlessly fascinating to fairgoers. Aspen sent a gilded Silver Queen statue, and the women of Pueblo sent a model of their city’s Mineral Palace. 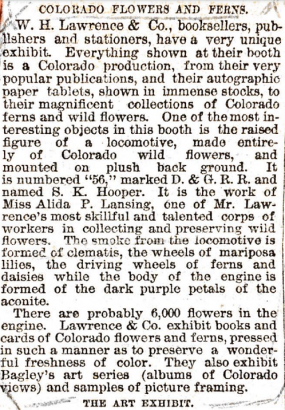 All of this creativity, technology, and bounty were strong advertisements for anyone considering doing business with or visiting our state. A less celebratory note appears, however, when examining the racist and paternalistic cultural messaging about Native Americans that Colorado dragged along to the Fair.

Two exhibits in particular exposed the belief then held by many Colorado whites: that the Utes, Cheyenne, and Arapaho, indigenous to the region, were the last of one composite dying nation of Indians, to be romanticized, “civilized,” and eradicated. Equally concerning, the ancient Ancestral Puebloans of southern Colorado were presented as primitive curiosities who had mysteriously disappeared from the face of the Earth. We now believe these ancient peoples did not vanish without a trace, but rather migrated to other regions of the southwest, where large numbers of their descendants continue to live today.

The two exhibits that most glaringly presented these messages were the immersive “Colorado Cliff Dweller” exhibit of Mesa Verde artifacts, and a large-scale statue of a Native American bison hunter. 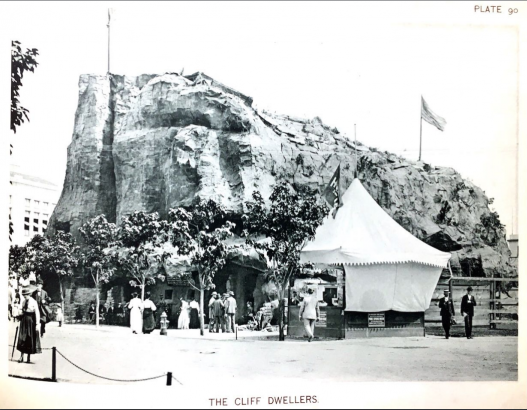 Official Views of the World's Columbian Exposition Issued by the Department of Photography, 1893
Cliff Dweller Exhibit

The Cliff Dweller exhibit, designed by the H. Jay Smith Exploring Company, consisted of a recreation of Battle Rock Mountain and the Mancos Cañon, and was described thus in a printed pamphlet sold by the company at the Fair,

"rocks covered with the yucca plant and the sage-bush rise on both sides to the height of 70 feet, and in the recesses of the tumbling sandstone are reproduced on a scale of one-tenth, the most picturesque ruins bearing the great archaeologic interest. Cliff Palace, which once harbored more than twelve hundred inhabitants, is reproduced on the left with its towers and buildings in ruins, just as they were found by the exploring party on its last visit to the cañon….Further on is High House, one of the most inaccessible refuges of the persecuted Cliff Dweller."

For an additional fee, attendees could choose to walk across the top of the exhibit, or enter inside, where they would find a cave, paintings, and further recreations of the cliff dwellings and their human architects. Pride of place was given to 1,400-year-old artifacts such as pottery and scraps of cloth.

Where the exhibit became offensive to the dignity of these ancient humans, and to our own sensibilities and legal guidelines today, was with a “rare and complete collection” displayed of actual mummified human remains of “men, women, children, skulls and hair, burial robes, and wrappings” that had been exhumed from the ruins.

The pamphlet further highlights the clinically detached lack of respect for these individuals in its introduction, which referred to these people as “primitives,” and read in part

"An extinct race, leaving no history by which modern investigators may arrive at a definite knowledge of the age in which they lived, or their pursuits, the “Cliff Dwellers” form an interesting and puzzling subject of conjecture for ethnologists, fascinating for its very elusiveness….

They are a mythical race, exhibiting in the relics found, rare powers and refined tastes at variance with the common idea of aborigines."

While this exhibit attempted to present a community of people that most Americans in 1893 had never before encountered, and it used the archaeological language and scientific methods prevalent at that time, it also did not escape turning these ancient peoples into an unwilling sideshow. The intent may have been to kindle familiarity with and fascination for ancient Native cultures, but it also relied on paternalism, and mythologized an ancient culture as primitive and mysterious. 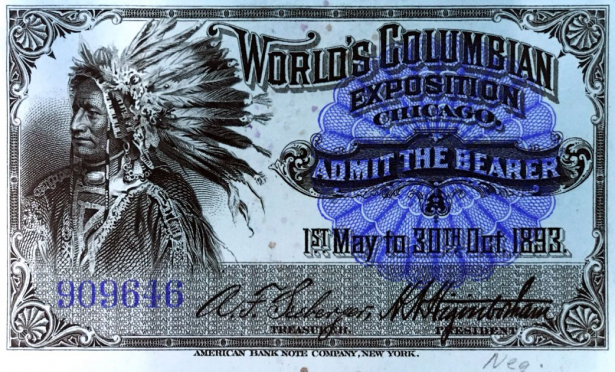 Turning to look at how Coloradans at the Fair presented living Native Americans, one need look no further than a sculpture that stood in the Colorado Pavilion, created by Denver University Art School professor Preston Powers. The larger-than-life statue features a Native American hunter standing with one foot atop a slain bison.

The statue will be familiar to many of our readers, as it eventually returned home and came to rest on the eastern side of the State Capitol building, where it remains today. 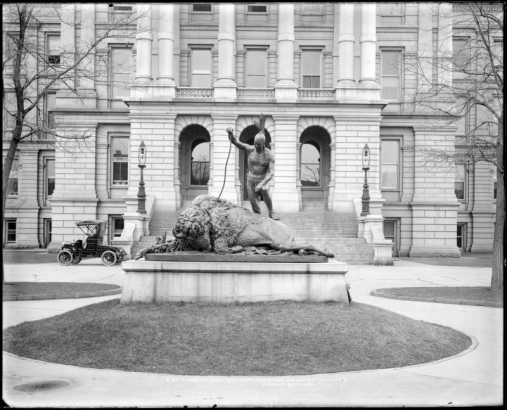 The image of the statue in and of itself is not necessarily concerning. However, its current title does give one some pause: “The Closing Era.”

Assigned by poet John G. Whittier, the meaning of the title depends on which interpretation you favor. The title could carry connotations of Frederick Jackson Turner’s premise that the Native American centuries are closed, and the frontier has been “won.” This was clearly the interpretation ascribed to by one Mrs. E.M. Ashley, Colorado's representative to the Women’s Pavilion at the Fair, whose thoughts are featured below. 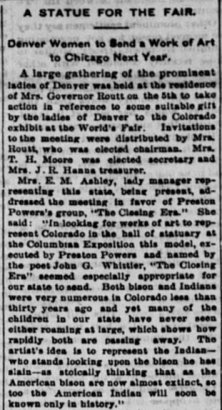 Silverton Standard, February 13, 1892, from coloradohistoricnewspapers.org
A Statue for the Fair

It is also possible to interpret the title's intent as being a snapshot in time, on the precipice and documenting the vagaries of history.

Current title aside, however, even more questionable is the alternative name for the statue that was printed in many contemporaneous publications about the Fair: “The Last of His Race.”

This alternate title brings one to wonder: who or what does “his race” refer to? Is it the man? Is the sculpture a romanticized vision placing Native Americans firmly in the past? Or does the title refer to the bison itself? And what would that mean, considering bison were hunted nearly to extinction in the late 1800s, partially by whites hoping to hasten the demise of Native communities?

Was the statue meant to document a changing era, or to celebrate cultural extermination?

Whatever the intent behind the statue’s title, it was indicative of the political and cultural conversations then happening around what was called “the Indian question” in the West.

Overall, as one examines Colorado's exhibits at the Fair, one does not sense hostility towards the subjects represented. Coloradans believed they were bringing their best, most unique contributions to share, in hopes of standing proud in front of the world. As with many aspects of casual racism and chauvinism with which we continue to struggle today, while Nineteenth Century Coloradans' intent may have been benign, their impact was not. The naiveté and misunderstandings of the past have real consequences for many people.

The 1893 Chicago World’s Fair displayed the best of what Colorado, America and the world had to offer, and in the hindsight of history, also exposed the worst aspects of the society that came together to build it. As an exposition of the “latest and greatest” of its time, it was also bound to display the beliefs of its creators in ways they may never have predicted.

If you’re interested in learning more about the Chicago World’s Fair, you will enjoy some of the following items from our collections:

Thanks for filling in a lot of blanks, Laura. Read that 'White City' novel by E. Larson many years ago, but didn't know the extent of Colorado's participation. Thanks.

Thanks for reading, as always, Peter! The White City novel was fascinating, wasn't it? It was great to find additional circulating materials related to H.H. Holmes in our collection.

It was also interesting to me how many of Colorado's contributions to the Fair are still right under our noses, so to speak.