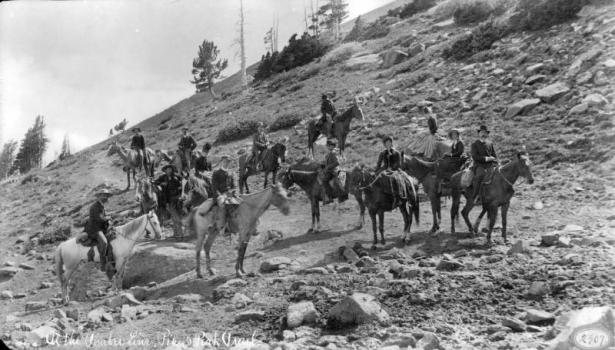 Colorado is blessed with 53 mountain peaks that are 14,000 feet or higher in elevation and are collectively known as Fourteeners.

If you've lived in the state for any length of time, you've probably heard plenty of folks talking about climbing these peaks and maybe you've even climbed a few yourself. While there's no question that climbing a Fourteener is no simple feat, it's also a relatively common one these days. However, that wasn't always the case.

In the time before Gore-Tex, CamelBaks, and handheld GPS devices, plenty of hearty folks donned layers of wool and burlap, laced up their hobnail boots and ascended Colorado's stairways to the sky. Those early climbers are the subject of a new book by Colorado author Woody Smith, Early Ascents on Pikes Peak (History Press, 2015).

Smith's meticulously researched volume focuses on accounts of Pikes Peak climbs that occurred between 1819-1902. As is so often the case with climbing Fourteeners, the stories in Early Ascents range from hair-raising to unbelievable. Readers are taken directly to the wind-blown boulder fields and winding paths that lead up to Pikes Peak's 14,114 foot summit via an array of first-hand accounts and archival newspaper stories.

Smith took great care in assembling his research, some of which was done at Denver Public Library's Western History Department, and has amassed a truly unique collection of stories.

Included in Early Ascents is an account of the first-known woman to scale Pikes Peak, Julia Archibald Holmes. (Smith does point out that we'll never really know who the first people to summit the Peak were and that's it very likely that local Indians answered the challenge the massive mountain offered.) Holmes took on the mountain in August of 1858 after several weeks of convincing her husband that the journey was a good idea. Though it took them several days to summit, the Holmes duo were well prepared for their journey with a supply list that would leave the REI crowd in tears.

Included in the 35-pound (probably canvas or burlap) backpack Holmes carried up the mountain were:

​Those are the makings of a rugged trip but it did come with a rewarding view Holmes described as, "beyond my powers of description."

While Early Ascents is a valuable tool for researchers, it's also an enjoyable read for anyone who loves Colorado's mountains and the epic journeys they've inspired.

Interested in learning more about Pikes Peak and its rich history? Check out these titles from the WH/G collection:

I'm still puzzling over why they packed 10 pounds of bread and only 1 pound of hog meat.

Those darned homophones can be tricky.

Great post, Brian--thank you for inspiring us to travel up those rugged mountain peaks whilest sitting in our armchairs! Though I think wool out-performs Gore-Tex any day--can't beat the stuff & if the moths don't get to it, wool lasts for years & sees you through many tough miles!

Thanks Leigh Ann! Gore-Tex makes it too easy anways!