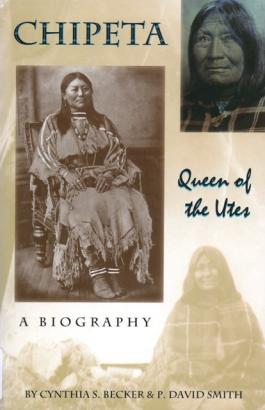 When Chipeta was first called Queen of the Utes, the term was meant in a derogatory way by a Rocky Mountain News reporter who described her presiding over Ute “vermin” in her buckskin. But then Denver poet Eugene Field wrote a poem dedicated to Chipeta and her role in saving white hostages from Utes after the Meeker Massacre, and an adoring public embraced her for her wisdom, beauty and grace. She became as famous as Ouray. Today, there are streets, places and organizations all over Colorado and Utah named after Chipeta.

When Chipeta was a baby, a band of Tabeguache Utes found her crawling in the ruins of a Kiowa Apache village, the only survivor of a savage attack. The Utes adopted her and raised her as their own. She became a caretaker for Ouray’s son after Ouray’s first wife died. The two became close and married. Ouray and Chipeta were inseparable. It was rare for Ute women to travel with their men, but the two traveled together as Ouray negotiated with whites and other Ute leaders for Ute lands. Ouray received a salary for his role as an interpreter and hunter for the Los Pinos Agency. Other Utes became suspicious and assumed that the money he received was in return for selling off Ute lands. But while Ouray was no longer welcome with certain Ute bands, Chipeta was accepted with open arms by everyone. The council she kept with other Utes became invaluable to Ouray. Soon, Chipeta was giving council to visiting chiefs, tribal headmen and U.S. functionaries. She continued in this role for the rest of her life. It was Chipeta who stayed up all night with Ouray as the White River Utes fought with the U.S. Cavalry up North, convincing him not to ride to their aid and thus, preserving what peace the Utes had left. After Ouray died and the Utes were stripped of their remaining Colorado lands, she continued to advocate for her people and for peace.

Chipeta dined with Kit Carson’s family and in the lavish homes of Indian affairs agents. She was eulogized in Washington D.C. newspapers and was well-loved. But after being banished to Utah, she was forgotten. On the Uintah Reservation, the Utes faced a harsh climate far different than their ancestral homelands in Colorado. They were told to farm, but most of the land wasn’t arable. The government allowed miners and others to trick the Utes and steal land from them. Chipeta survived on government commodities. Then the government subdivided the reservation and took more land away. Yet Chipeta’s spirit wasn’t broken and she still spoke for many Utes. In 1897, her brother McCook represented her opinions in Washington D.C.

Around the time of her death, the public began to notice her again. People sent her gifts. She was invited to Colorado to visit Montrose and the Uncompahgre Plateau. President Taft insisted she ride with him on his train to watch the opening of the Gunnison Tunnel. She was once again Queen of the Utes. When she died, the city of Montrose insisted she be exhumed from her humble grave in Utah and buried in Montrose in an elaborate ceremony. Her brother McCook agreed and today, she rests there in her ancestral homeland. For more information about Chipeta read Cynthia Becker's informative books Chipeta: Ute Peacemaker and Chipeta: Queen of the Utes. For photos of Chipeta, see our Digital Photos. Come to Western History and Genealogy to learn more about the Utes.