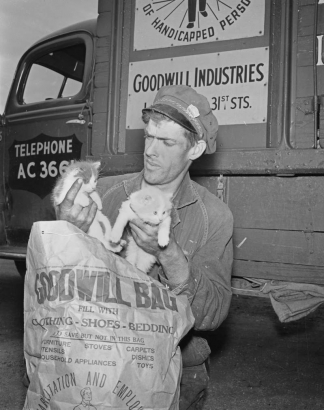 From the opening of the Denver Cat Company, to the debut of the Kitten Pavilion at the Denver County Fair, to the advent of feline wine created by a Colorado company, there is no doubt that Colorado is in the throes of feline frenzy.

But cat lovers in Colorado are nothing new – in fact, they have been around longer than the Centennial State itself.

Even the first arrival of cats into Colorado is the stuff of legend.

Legend has it that a Denver miner, home to visit his Kansas family, encountered a friend named Moses Friedman who had plans to go to Colorado. When Friedman asked what he could sell in the mining camps to turn a profit, the miner jokingly exclaimed “Take a load of cats!”

Friedman took the advice to heart and did just that – buying cats off neighborhood children for ten cents apiece. One hundred and fifty cats later, Friedman loaded them into a wagon and ventured out West. Although Friedman never found gold, he struck it rich as his alley cats were bought by eager Denverites at the staggering price of $10 each – almost $300 in today’s money!

Similar stories of enterprising cat peddlers can be found throughout Colorado - J.C. Dexter, the man who brought cats to Pike's Peak, even had a specially designed three story wagon to house his whiskered wares.

One imagines eager Coloradans gathering to meet itinerant cat salesmen in towns throughout the territory. By the time Colorado achieved statehood in 1876, most households could boast at least one cat companion - and more than one feline dealer made a fortune not in gold, but in tiny predators.

With such an illustrious origin, it is no wonder that Colorado boasts a number of homegrown celebri-cats. While it would be impossible to do them all justice, we have selected some highlights of legendary local felines.

Tough Relaxes After a Show

1948 was a banner year for Colorado in the feline performing arts.

Retha's efforts were well rewarded, and she dubbed Puff and Tough the Catrobats. They delighted Denverites with their performances, clothed in outfits from Retha's dolls.

The Catrobats garnered enough attention that they landed a front-page story in The Rocky Mountain News. The News noted that despite their new celebrity lifestyle and fashionable wardrobe, Puff and Tough still liked to “hold a good old-fashioned alley wrestling or boxing match.”

In Ramah, Colorado, a tomcat named Baby gained acclaim for his music, before his career was abruptly ended by tragedy.

Baby’s instrument of choice was the piano, which he initially learned to play to alert his owner, a rancher’s wife named Mrs. Rice, that it was time for breakfast. “If she didn’t get up right away,” Mrs. Rice’s mother recalled, “Baby would go down to middle C and stare at her.”

Baby seemed poised to take the music world by storm, with a series of articles scheduled to run in The Denver Post. But when the Post crew arrived in Ramah to see Baby in action for the first time, a tearful Mrs. Rice informed them Baby had been killed in a fight with a neighbor’s cat.

Shocked by this act of violence from a jealous rival, the Post ran a touching eulogy to the budding celebrity:

“For an artistic soul, he must have had courage and a will of iron. He went to his death with his boots on.” 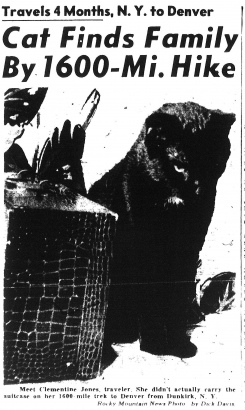 Perhaps Colorado’s best known cat celebrity is Clementine Jones, thought to be the inspiration for the 1960 novel The Incredible Journey and the 1993 Disney film Homeward Bound. While we were unable to prove a definitive connection between Miss Jones and The Incredible Journey, the stories bear many similarities.

In late 1949, the Lundmark family relocated from Dunkirk, New York to Denver, Colorado. Their beloved family cat, Clementine Jones, had just given birth to a litter of kittens and was in no position to travel.

The Lundmarks left Clementine and her kittens with a neighbor, and were saddened to learn that Clementine had gotten out one night, not to be seen again.

Four months later, the Lundmarks were shocked when a bedraggled black cat arrived on the doorstop of their Denver home. Mrs. Lundmark recognized the cat instantly as Clementine Jones – easily identified by a small white mark on her chest, an extra toe on one paw, and a burn mark from where Mrs. Lundmark had dropped ashes on her accidentally when Clementine was a kitten.

The journey totaled around 1600 miles, which Clementine Jones apparently traversed by foot (or paw). The Lundmarks and animal experts alike were stunned by the feat, many wondering how a cat could find a family halfway across the country.

Though several outspoken cynics disbelieved the story, Clementine Jones became a celebrity overnight. In fact, she was awarded the 1950 Puss n’ Boots award, a hallmark of 1950’s feline fame.

The citation accompanying the medal Clementine Jones was awarded extolled her “super-human strength and intelligence.”

After her harrowing journey and brush with celebrity, the Lundmarks confined Clementine Jones to a strictly indoor lifestyle to discourage any further cross-country rambling.

Tommy Boy’s owner, Erin Moore, had taken him to a convention in Columbus, Georgia in early 1988. Tommy Boy escaped one night – likely lured by the smell of his favorite food, fried chicken.

Tommy Boy spent a month living in the convention center, eluding capture by center employees. Finally, the manager was able to lure him into a carrier using fried chicken, and center employees chipped in to pay for Tommy Boy’s $120 plane ticket back to Denver.

Tommy Boy returned to Colorado to much fanfare, including a front page story in The Rocky Mountain News, and a commemorative action figure. 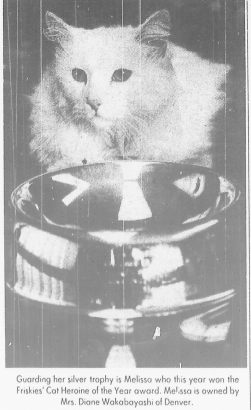 Dogs may have the reputation as great defenders, but that doesn't mean cats can't hold their own when people are threatened. Two Colorado cats earned national recognition for their bravery.

Webster Ramsey, a Denver grocer and martial arts enthusiast, taught a few sparring techniques to his cat Tiden Taden, never dreaming she’d have occasion to put them to use.

However, on a Monday night in 1950, an unfamiliar man came into Ramsey’s store, where he also lived with his wife. The man told Ramsey he was armed and to give him all the cash on the premises.

Ramsey refused to hand over the money, and the two men got into a physical altercation.

Tiden Taden’s training came in handy, as she willingly leapt into the fray. She jumped repeatedly on the robber’s head and back, claws outstretched, and also left several scratches on his face.

The man gave up his holdup and fled, not to be seen again.

Tiden Taden became the darling of newspapers, with articles published in Denver and beyond. A Denver Post article proclaimed her “a bundle of feline fury.”

Cats Magazine honored Tiden Taden as the Heroic Cat of 1950.

In 1978, Diane Wakabayashi purchased a book and record store in East Denver. She found the property came with an added bonus - a cat named Melissa, who refused to vacate the premises when her former owners sold the building.

One slow afternoon, Ms. Wakabayashi was occupied in the back of the shop with some customers, when a solitary man came to the front of the store, lingering near the cash register. When the customers exited, the man pulled out a large knife and demanded Ms. Wakabayashi empty the register.

Melissa, sensing the distress, circled the bandit hissing and growling. The robber picked up a chair to hit Melissa, but she dodged his furniture-based assaults. Melissa distracted the assailant long enough for Ms. Wakabayashi to run out the door and call the police. By the time they arrived, the store was empty except an unharmed Melissa.

Melissa's story caught the attention of Friskies, who honored her as the 1978 Cat Heroine of the Year. Melissa earned a silver food bowl, a year's supply of Friskies cat food, and one hundred dollars (accepted by Ms. Wakabayashi on her behalf). 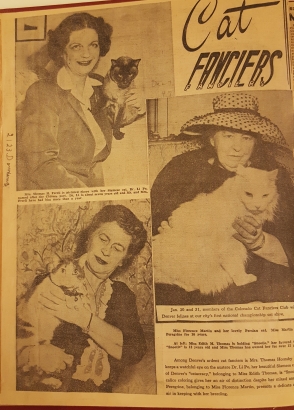 If this article has only whetted your interest in Colorado's celebri-cats, never fear! The Denver Public Library Western History and Genealogy Department has you covered.

Come browse our microfilm to read up on Clementine Jones, Tiden Taden, and a whole host of exceptional felines we couldn't fit into one article.

Or perhaps you'd like to flip through our historic scrapbooks from the Colorado Cat Fanciers. They say if you listen closely, you can still hear the voices of cat ladies past.

Come visit us on the 5th floor of the Central Library to get your feline fix!

Thanks for reading, Kate!

I am terribly guilty (and proud) of helping to promote Colorado's cat frenzy. I volunteered at the Kitten Pavilion last year and it was the cat's pajamas! I had no idea our archives were so feline friendly... obviously I need to do some hunting.

I bet working at the Kitten Pavilion was so much fun! There's always something new to discover in the archives.

Thank you for reading, Alex!

Cats Rule! Thanks for a great article.

That they do! Thanks for reading.

Great article! I got to meet Lil Bub at the Kitten Pavilion of the Denver County Fair last year and I was star-struck :)

I wish I could have met her! Talk about star power!