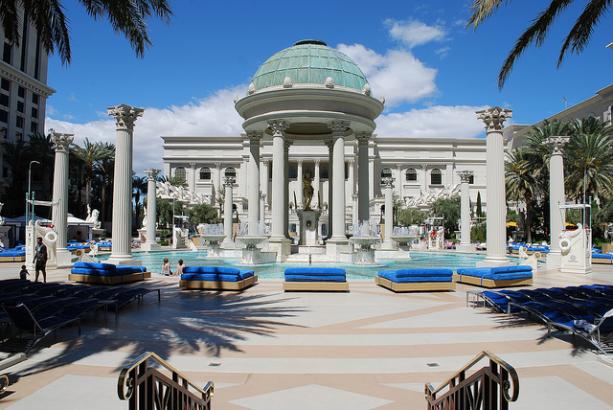 The story of the Trans-Mississippi West is peppered with giant personalities who didn't know the meaning of words like, "can't" and "shouldn't." These pioneers saw the West as a blank canvas and were eager to paint their own vision on it, no matter what that took.

Jay Sarno, the father of modern Las Vegas and the brains behind Caesars Palace and Circus Circus, was one of those pioneers. He wasn't the kind of guy who would let something as trivial as acres of Nevada wasteland prevent him from building a palatial casino resort, brimming with waterfalls, fountains, and pools.

Sarno, whose story is told in David G. Schwartz's new book, Grandissimo: The First Emperor of Las Vegas (Winchester Books, Las Vegas, 2013) grew up in St. Joseph and served in the US Army during World War 2. After the war, he started several contracting businesses in the South, but never really stuck with anything, except a compulsive gambling habit, for long.

Around that same time, the Las Vegas Strip was still a collection of small-time casinos that hadn't quite hit its prime and was sometimes referred to as the, "Hayseed Havana."

After a less-than-satisfying gambling junket to the city, Sarno found himself in Rome's St. Peter's Square where he had a Eureka moment. He decided to build the grandest, most elaborate hotel casino the world had ever seen and model it after the splendor of ancient Rome. (The fact that St. Peter's Square had nothing to do with ancient Rome did not hold him back in the least.)

Besides showcasing over-the-top architecture, Caesars Palace also specialized in coddling guests and making every person who stepped through the door feel like a big shot.

Caesars was an instant hit and served as the template for every casino that would ever be built on the Las Vegas Strip. Sarno's fortunes, however, weren't so bright. After allegations of mob influence in his projects,

Sarno sold his share of the Vegas icon for $60 million in 1969 and moved on to build another Sin City icon, Circus Circus - which never fared quite as well as Caesars. By 1974 he was wracked with debt and was an all but broken man.

Take a drive down the Las Vegas Strip today and you can still see Sarno's legacy standing tall in the massive pleasure palaces that copied, and built on Caesars' success. Drive another 20 or so miles east and you can see even more of Sarno's legacy in the rapidly receding waters of Lake Mead.

The city's never-ending thirst for water drained Nevada aquifers in the 1960's and are straining the limited supplies that come from both Lake Mead and the Colorado River.

Nies contends that the pioneers of Las Vegas (including, but not limited to Sarno) has wreaked havoc on the environment and is simply unsustainable. She further suggests that if Las Vegas continues on its current path, the consequences could be dire for the entire Western United States.

Her thesis is definitely food for thought for anyone who loves watching the dancing fountains at the Belaggio; lounging by the pool at Caesars; or enjoying a round of golf at the Las Vegas Country Club.

It's also testament to the fact that the dreams of pioneers often have consequences that extend well beyond their original intentions.