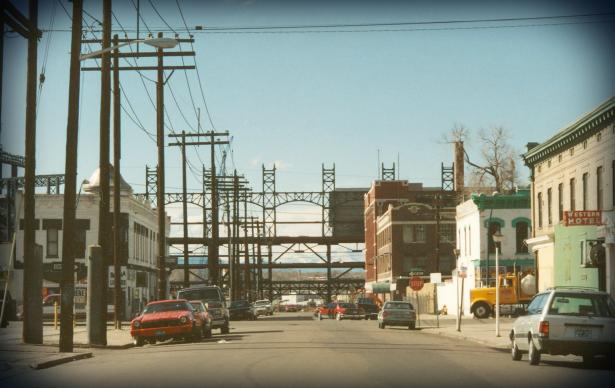 The story of how this neighborhood went from rags to renaissance can be found in the papers of the late Karle Seydel, now available for research in DPL’s Western History and Genealogy Department (Level 5, Central Library).

Mr. Seydel was an urban planning consultant who moved to Denver from Boulder in the mid-1980s. In 1989, he began attending meetings of the Larimer Square North Merchants Association (renamed the “Ballpark Neighborhood Association” in 1994), an incorporated nonprofit organization initially composed of Larimer Street merchants who sought to resolve issues of crime and blight inhibiting business growth and development. Seydel’s interest in the neighborhood north of Denver’s Lower Downtown (“LoDo”) neighborhood grew, and he nicknamed the area “NoDo.”

When Denver-area voters passed a sales tax increase to finance construction of a Major League Baseball stadium in August 1990, Seydel knew just where the stadium should be built: a 76-acre site at 20th and Blake Streets.

Seydel envisioned a ballpark that would revitalize Denver’s downtown area, but his proposal was met with strong resistance from the Denver Metropolitan Major League Baseball Stadium District, the Lower Downtown Historic District, and Denver City Council. All three groups preferred the site that now hosts the Pepsi Center.

In response to the opposition he faced, in 1990 Seydel formed the North Downtown Alliance of Businesses and Residents for Baseball in Our Backyard. He undertook research on urban stadiums and created drawings of an old-fashioned ballpark, which would later serve as the design concept for Coors Field. Seydel also began attending Metropolitan Major League Baseball Stadium District meetings regularly and became a vocal advocate for locating the ballpark within the LoDo and NoDo neighborhoods based on factors of cost, access, and economic impact. Seydel’s convictions were justified by a report released in December 1990 by the Urban Land Institute.

After the construction of Coors Field, Seydel’s urban planning and advocacy work focused on creating an attractive and prosperous historical area surrounding the ballpark. This work continued until his unexpected death on May 12, 2010, at the age of 59.

To learn more about the Karle Seydel Papers (WH2155) and the materials that tell the story of the Ballpark Neighborhood's transformation, click here.

Awesome blog!Love the pictures and the history. What a difference a sport can make on a city. Keep up the good work...

Karle possessed a unique set of perspectives about Denver and how best to blend our Western romanticism, our shared vision as a community to stride forward and not fall backwards into complacency, and his uncanny understanding about people in this community and how to rally them. His impact on the Downtown Denver area is unmistakeable, but even more profound is the impact his David versus Goliath approach to the Ball Park Neighborhood and Coors Field has had on the entire region and, in fact, Major League Baseball from coast to coast.

Thank you for your comments, Hank. We are truly honored to have Karle's papers here at DPL.

It is true that Karle moved to Denver from Boulder in the 1980s. In addition to that, he grew up in Park Hill, and attended Gove Junior High School and East High School.