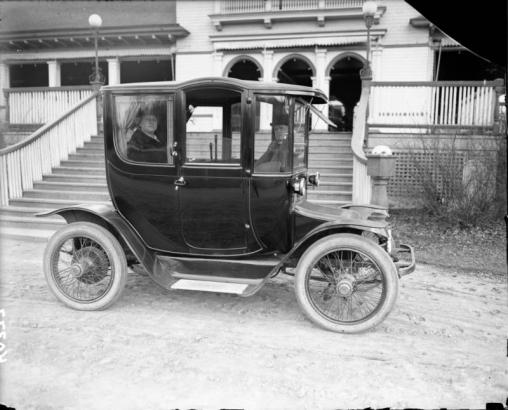 When we think of electric cars, sleek Teslas and visions of the future generally spring to mind. But as is so often the case, everything old is new again.

Far from being the car of the future, the electric car is actually the preferred vehicle of the past. Electric cars enjoyed the height of their popularity over one hundred years ago. The undisputed leader in the field of electric automobiles was the Oliver P. Fritchle Company, headquartered in Denver.

A chemist and electric engineer by trade, Fritchle was fascinated by the batteries of the new electric cars. He established himself as a skilled repairman of electric car batteries, until he realized he could improve upon existing electric car models himself.

An Advertisement for the "One Hundred Mile Fritchle" (Denver Republican, December 11, 1910) *Click photo for higher resolution*

The One Hundred Mile Fritchle

When the Fritchle electric car plant opened its doors in 1908, Oliver Fritchle boasted that his unique battery could carry his automobiles one hundred miles on a single charge. When skeptics challenged the claim as a mere publicity stunt, Fritchle set off on a cross-country road trip, stopping only when necessary. As he claimed, an overnight charge would last the car one hundred miles - an unheard of feat for the time. Orders for the “One Hundred Mile Fritchle” came pouring in from across the country.

Electric cars had been a favorite of elite women since their first appearance around 1900. Society ladies preferred the cleanliness and silence of electric vehicles, which they found more refined than the loud and often filthy emissions of gasoline cars.

The Fritchle was designed with Rocky Mountain socialites in mind. The wide seats and high ceilings gave wealthy women - with their large dresses, wide-brimmed hats, and many accessories - freedom to move without feeling constricted. The immense power of Fritchle's battery propelled the cars quickly up steep mountainsides, making them ideal for those who wished to go joyriding in their leisure time. Molly Brown was often seen driving around Denver in her beloved Fritchle.

Henry Ford’s vehicles sold for around $500 a piece when the Fritchle plant opened. At roughly $14,000 in today’s money, it was a manageable investment for middle and upper middle class families. By contrast, Oliver Fritchle priced his new cars at the princely sum of $3500, or $105,000 in today’s money, making them unattainable for all but the wealthiest citizens.

In 1912, Fritchle set up offices on New York’s Fifth Avenue, where the highly anticipated vehicles had a long waiting list before the plant put a single auto into production. 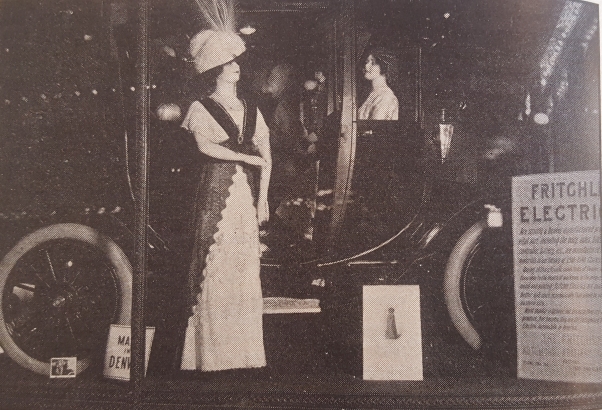 Well-dressed mannequins and a Fritchle parked in the window of Joslins luxury department store (Denver, March 1912)

The End of An Era

Unfortunately, Fritchle’s charmed run did not last long. After nearly a decade as the gold standard of luxury automobiles, the Oliver P. Fritchle Company shut its doors, in 1917, in New York and Denver.

A number of factors contributed to the Fritchle’s demise. Electric cars, with their reputation for being showy and expensive, fell out of favor as the United States entered the First World War. More economical gasoline cars soon overtook the electric automobile in even the elite markets. Improvements to the internal combustion engines of gasoline cars surpassed advancements in the engines of electric cars, where no electrical equivalent to internal combustion had been developed.

Outside of Denver, where electric charge stations (largely built and maintained by Fritchle himself) were ubiquitous, the relative scarcity of electric cars meant charging stations were few and far between. For those who wanted to venture beyond the Fritchle’s one hundred mile range, this could mean needing to leave the expensive car at an electrical plant overnight to charge. By contrast, gas stations could be found across the country, meaning that even though the range of gas powered automobiles was smaller, they were easier to refuel.

The fall of Fritchle was the death knell in the already struggling electric car industry. Even with the advent of postwar prosperity in the 1920s, electric cars did not re-emerge. Inventors like Fritchle had moved on to other projects, and did not see the point in reviving what they considered a dead product. It would be another one hundred years before electric cars once again made their way into the mainstream.

Today, one of the only known surviving Fritchles can be seen on display at the History Colorado Center. Those interested in learning more about this turn of the (last) century electric car are invited to browse the historic microfilm collections at the Denver Public Library, Western History and Genealogy Department (fifth floor of the Denver Central Library).

What was Fritchle's address in Denver? And, what is at that address today?

I believe they lived on 9th and Franklin, however, I am not sure. I have a cousin, David Fritchle that was raised at that address, and I think he is a descendant of Oliver P. Fritchle. However, I do know that Oliver's two sons attended and graduated from Ohio State. Oliver divorced his first wife and remarried. His first wife, (Blanche Nieswander) moved back to Ohio and is buried in Columbus, I believe. Oliver moved to California after closing his business in Denver.

The corner of colfax and clarkson. The Fillmore.

That's interesting. The Fillmore was originally the Mammoth Roller Skating Rink, opened in 1907, but it closed in 1910 and Fritchle converted the building into a manufacturing facility. I didn't know that the building had an industrial past in addition to being a skating rink before becoming a concert venue.

Did the Byers-Evans house owners have a Fritchle? I heard the house once had an electric car, but last time I visited the guide knew nothing at all about it.

Sorry for the delayed reply. We coordinated with our colleagues over at History Colorado and the Byers-Evans house to answer this one. Here's what we found:

In te Fritchle collection at History Colorado, both John E. Evans and Evan E. Evans are listed as owning Fritchles, but they are listed at addresses other than 1310 Bannock (1325 Race and 1401 12th Ave respectively)

Here's the answer from the Education Coordinator at Byers-Evans:

This is a great question and yes we do know that there was a Fritchle housed in our 1883 garage/carriage house at some point in 1310 Bannock's history.  William Evans lived here from 1889 until his death in 1924.  The carriage house's use became for cars as a garage around 1905 and we know that William hired a chauffeur, David Morton.  Our knowledge of the Fritchle in our garage by the time of their popularity in Denver is based upon the fact that David Morton was the mechanic for both a gas and electric car.  Evan Evans was William's younger brother and the family member responsible for arranging the family wealth into the Evans Investment Company.  Although we don't see William's name as an owner, it would not surprise me if Evan Evans had his car serviced or even used the chauffeur services of David Morton.  This use probably extended to the entirety of the family as I am not sure Evan Evans had a chauffeur/mechanic himself.

They also have a photo of David Morton in the old driveway of the 1310 Bannock, though it doesn't look like any of the Fritchles that I've seen.

The Unsinkable Molly Brown owned a Fritchle Electric. Once her and her husband got into an argument and he went out and broke out every window in the car. Oliver P. Fritchle is my 1st cousin, twice removed. His father and my great grandfather, Benjamin Franklin Fritchle are brothers. His father being Augustus C. Fritchle. I currently reside in Denver and have seen the car in the museum on Broadway.