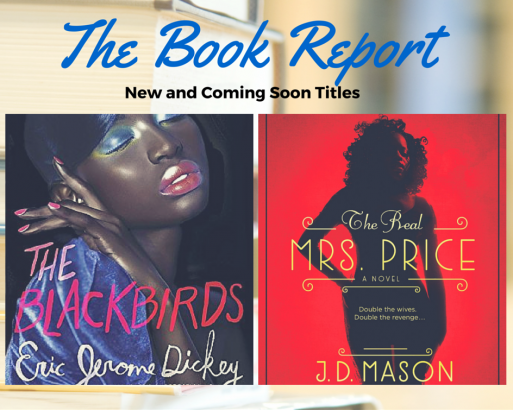 ​Looking for something to read from an African/African American point of view and/or written by someone from the Diaspora? Browse our May list of new books available now and coming soon to the Denver Public Library. Book summaries provided by ProQuest Syndetics.

They call themselves the Blackbirds. Kwanzaa Browne, Indigo Abdulrahaman, Destiny Jones, and Ericka Stockwell are four best friends who are closer than sisters, and will go to the ends of the earth for one another. Yet even their deep bond can't heal all wounds from their individual pasts, as the collegiate and post-collegiate women struggle with their own demons, drama, and desires. Trying to forget her cheating ex-fiancé, Kwanzaa becomes entangled with a wicked one-night stand—a man who turns out to be one in five million. Indigo is in an endless on-again, off-again relationship with her footballer boyfriend, and in her time between dysfunctional relationships she purses other naughty desires. Destiny, readjusting to normal life, struggles to control her own anger after avenging a deep wrong landed her in juvi, while at the same time trying to have her first real relationship—one she has initiated using an alias to hide her past from her lover. Divorced Ericka is in remission from cancer and trying to deal with two decades of animosity with her radical mother, while keeping the desperate crush she has always had on Destiny's father a secret... a passion with an older man that just may be reciprocated. As the women try to overcome—or give into—their impulses, they find not only themselves tested, but the one thing they always considered unbreakable—their friendship. More books by Eric Jerome Dickey.

Lucy Price is living the American dream. She has been married to her successful husband and businessman, Edward Price for a year and couldn't be happier until she learns that Eddie is a dangerously ruthless man, heavily involved in illegal activities that threaten not only her marriage, but her life. Eddie abruptly disappears, but not before warning Lucy that if she wants to keep breathing she'd better keep her mouth shut. Six months later, word of her husband surfaces when she learns that he is presumed murdered in a small Texas town, apparently killed by his "wife", Marlowe Price. Marlowe is no stranger to trouble. An outcast in her own community for being one of those "hoodoo women," who can curse you or cast you under her beguiling spell, Marlowe is shunned at every turn. Six months ago, a whirlwind romance in Mexico led Marlowe to marry the man she thought she'd spend the rest of her life with. For Marlowe and Eddie, there is no such thing as trouble in paradise. But late one night, when Marlowe witnesses her husband putting the body of a dead man in the trunk of his car, the illusion comes crashing down around her and she knows she has to move fast before the devil comes calling once again. Now, Lucy and Marlowe must come together to find out where and who Eddie really is, and help each other through the threat he poses. There's nothing more dangerous than a woman scorned...except for two women scorned who are willing to put their pasts behind them and band together to take one bad man down. More books by J.D. Mason.

My Name Is Not Friday
Jon Walter

Nonfiction:
Boys Among Men: How The Prep-To-Pro Generation Redefined the NBA and Sparked a Basketball Revolution
Jonathan P. D. Abrams

Better Git It in Your Soul: An Interpretive Biography of Charles Mingus
Krin Gabbard

Retire Inspired: It's Not an Age, It's a Financial Number
Chris E. Hogan

My dream, my wish, my hope is to read books that feature (as main characters that do not die 2 chapters in) people of color in every genre. Books that their race is not the theme and racial prejudice not the main topic. Books of adventure, fantasy,horror, comedy, YA, anything. If only I could write...

Believe it or not...more and more books are being published that meet this criteria based on the needs and wants of readers. Awareness helps and this is one way to bring awareness of books written by a wide variety of authors and genres from the African/African American point of view.