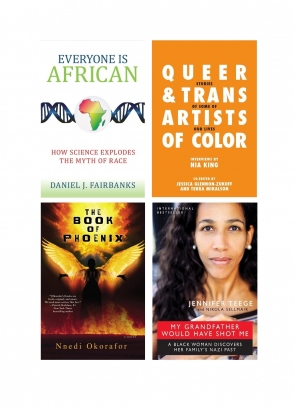 New African American Interest Books and Authors
Looking for something to read from an African/African American point of view and or written by someone from the Diaspora? Browse our list of new books available now or coming soon to the Denver Public Library. Updated monthly...check out our list for June. Book summaries provided by ProQuest Syndetics.

Featured Titles:
Everyone Is African: How Science Explodes the Myth of Race
Daniel J. Fairbanks

What does science say about race? In this book a distinguished research geneticist presents abundant evidence showing that traditional notions about distinct racial differences have little scientific foundation. Both geneticists and anthropologists now generally agree that the human species originated in sub-Saharan Africa and darkly pigmented skin was the ancestral state of humanity. Moreover, worldwide human diversity is so complex that discrete races cannot be genetically defined. And for individuals, ancestry is more scientifically meaningful than race. This is an enlightening book that goes a long way toward dispelling the irrational notions at the heart of racism.

Queer and Trans Artists of Color: Stories of Some of Our Lives
Co-Edited By Jessica Glennon-Zukoff And Terra Mikalson

A collection of sixteen unique and honest conversations you won't read anywhere else...Mixed-race queer art activist Nia King left a full-time job in an effort to center her life around making art. Grappling with questions of purpose, survival, and compromise, she started a podcast called We Want the Airwaves in order to pick the brains of fellow queer and trans artists of color about their work, their lives, and "making it" - both in terms of success and in terms of survival. Welcome to the future of QPOC art activism.

The Book of Phoenix
Nnedi Okorafor

A prequel to the highly acclaimed, world fantasy award-winning novel, Who Fears Death, features the rise of another of Nnedi Okorafor's powerful, memorable, superhuman women. Phoenix was grown and raised among other genetic experiments in New York's Tower 7. Still innocent and inexperienced in the ways of the world, she is content living in her room speed reading e-books, running on her treadmill, and basking in the love of Saeed, another biologically altered human of Tower 7. Then one evening, Saeed witnesses something so terrible that he takes his own life. Devastated by his death and Tower 7's refusal to answer her questions, Phoenix finally begins to realize that her home is really her prison, and she becomes desperate to escape. But Phoenix's escape, and her destruction of Tower 7, is just the beginning of her story. Before her story ends, Phoenix will travel from the United States to Africa and back, changing the entire course of humanity's future. More books by Nnedi Okorafor

My Grandfather Would Have Shot Me: A Black Woman Discovers Her Family's Nazi Past
Jennifer Teege

When Jennifer Teege, a German-Nigerian woman, happened to pluck a library book from the shelf, she had no idea that her life would be irrevocably altered. Recognizing photos of her mother and grandmother in the book, she discovers a horrifying fact: Her grandfather was Amon Goeth, the vicious Nazi commandant chillingly depicted by Ralph Fiennes in Schindler's List --a man known and reviled the world over. Although raised in an orphanage and eventually adopted, Teege had some contact with her biological mother and grandmother as a child. Yet neither revealed that Teege's grandfather was the Nazi "butcher of Plaszów," executed for crimes against humanity in 1946. Teege's discovery sends her, at age 38, into a severe depression--and on a quest to unearth and fully comprehend her family's haunted history. Ultimately, Teege's resolute search for the truth leads her, step by step, to the possibility of her own liberation.

NonFiction:
No Excuses Fitness: The 30-Day Plan to Tone Your Body and Supercharge Your Health
Donovan Green