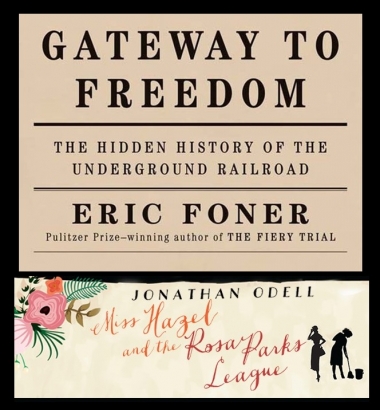 New African American Interest Books and Authors
Looking for something to read from an African/African American point of view and or written by someone from the Diaspora? Browse our list of new books available now or coming soon to the Denver Public Library. Updated monthly...check out our list for February.

Forced to operate in secrecy by hostile laws, courts, and politicians, the city's underground-railroad agents helped more than 3,000 fugitive slaves reach freedom between 1830 and 1860. Until now, their stories have remained largely unknown, their significance little understood. Building on fresh evidence--including a detailed record of slave escapes secretly kept by Sydney Howard Gay, one of the key organizers in New York--Foner elevates the underground railroad from folklore to sweeping history. The story is inspiring--full of memorable characters making their first appearance on the historical stage--and significant--the controversy over fugitive slaves inflamed the sectional crisis of the 1850s. It eventually took a civil war to destroy American slavery, but here at last is the story of the courageous effort to fight slavery by "practical abolition," person by person, family by family.

Set in pre-Civil Rights Mississippi, Miss Hazel and the Rosa Parks League is the story of two young mothers, Hazel and Vida - one wealthy and white and the other poor and black - who have only two things in common: the devastating loss of their children, and a deep and abiding loathing for one another. Embittered and distrusting, Vida is harassed by Delphi's racist sheriff and haunted by the son she lost to the world. Hazel, too, has lost a son and can't keep a grip on her fractured life. After drunkenly crashing her car into a manger scene while gunning for the baby Jesus, Hazel is sedated and bed-ridden. Hazel's husband hires Vida to keep tabs on his unpredictable wife and to care for his sole surviving son. Forced to spend time together with no one else to rely on, the two women find they have more in common than they thought, and together they turn the town on its head. It is the story of a town, a people, and a culture on the verge of a great change that begins with small things, like unexpected friendship.

Inside A Silver Box
Walter Mosley

Black: A Celebration of a Culture
Complied by Deborah Willis