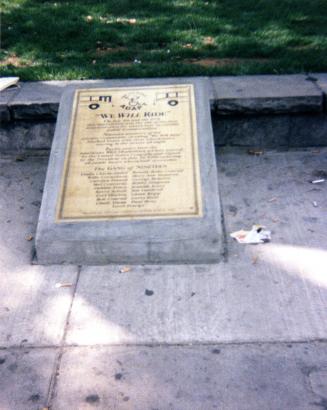 When I think about Independence Day, I normally think about the 4th of July with picnics, fireworks and parades. A few weeks ago, I met with members of ADAPT (American Disabled for Attendant Programs Today) and the Atlantis Community and they told me that this Saturday was the 36th anniversary of a important day in Denver history.

On July 5, 1978, Wade Blank and nineteen members of the Atlantis Community rolled their wheelchairs in front of two RTD Buses at the intersection of Colfax and Broadway chanting “We Will Ride” to protest the lack of accessibility to public transportation. This protest sparked a nationwide movement, which ultimately led to the American Disabilities Act (ADA) being signed in 1990 by President George Bush. This bold protest on July 5th established Denver as the cradle of the disability rights movement. Today, Denver is often voted as one of the most accessible cities in America.

The Denver Public Library Western History/Genealogy Department is committed to preserving the history of the disability rights movement in Denver.  In the last year, we have received the papers of Laura Hershey (WH2274), an activist, poet and writer and the papers of Wade and Molly Blank (WH2283) who were instrumental in founding ADAPT and the Atlantis Community. These papers illustrate their passion, drive and commitment to create a better life for people with disabilities. They worked to increase accessibility in public places, improve health care, change the public perception of people with disabilities and promoted people with disabilities to be active in the community. Both of these collections are available in the Western History/Genealogy Department for research.