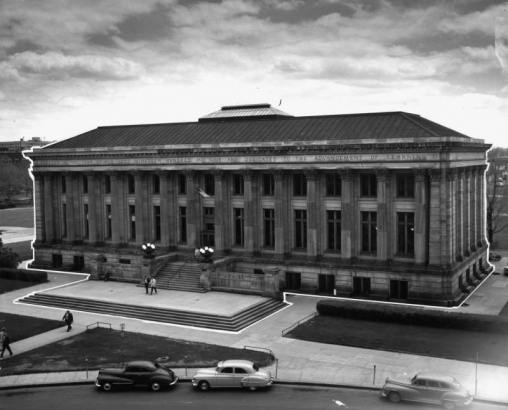 In the winter of 1909, the City of Denver was making grand plans for the grand opening of the Denver Public Library's new Andrew Carnegie-funded Central Branch, located on the corner of Bannock and Colfax. The folks at City Hall wanted to make a big deal about their new library and why not? It was a big deal. Andrew Carnegie, the steel tycoon/philanthropist had donated $230,000 (about $6 million in 2020) to the city for the construction of the new building, and plans were underway for a grand opening in November 1910.

Building a Carnegie library was a very big deal for the 60-year-old city, and City officials hatched a plan to invite Mr. Carnegie to the grand opening gala, according to an article from the June 5 edition of Denver Municipal Facts. But if Carnegie couldn't attend, the event would still take place on November 1, as that was the library's 23rd anniversary. Unfortunately, the library would not open on November 1, and Carnegie wouldn't be there when it eventually opened. (In fact, some people say he never even liked the building, but more about that later).

Carnegie originally offered the City the money for a library back in 1902. The offer was for $200,000 with a commitment from the City to spend at least $30,000 a year (about $897,000 today) for the building's operating costs. After about a year of consideration, the City settled on a site known as La Veta Place, which was described as, "...a long terrace of residences facing Colfax and turning the corner running along Bannock. Bannock Street was then called Evans Street." (Remember, this was decades before the City and County Building on Bannock Street was built.) To help fund the new library, the City purchased the buildings on the site and collected rent on them while architects started their plans. 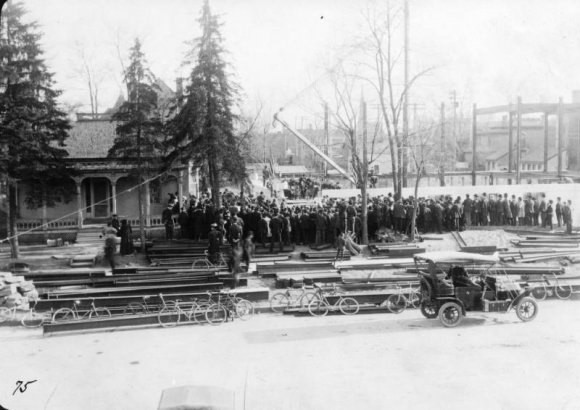 On August 7, 1906, ground was broken, and on April 1, 1907, the cornerstone was laid at a ceremony attended by then-Governor Henry Augustus Buchtel. Building continued without issue until contractors turned over a completed building to the City in April 1909. Everything looked good on the outside, but inside was a different story.

Contractors from an outfit called the Library Bureau (run by Melville Dewey - yes, that Melville Dewey) told the city they'd have custom tables and other interior furnishings for the lavish new book temple; but they simply didn't deliver. For reasons that are not entirely clear, the building didn't actually open to the public until February 1910. That said, those tables were a pretty good investment. Several of them are still in use in the Western History and Genealogy Department on the fifth floor of Central Library.

As for Carnegie, he didn't show up at the grand opening to see the glimmering new building with room for more than 300,000 books. Some have suggested that the Greek-style building was so ostentatious that Carnegie didn't like it at all. (Though that's a common refrain, tracking down its source is difficult at best.)

Despite its rough start, the Denver Public Library on the corner of Colfax and Bannock served the people of Denver for almost 50 years and was the cornerstone of the entire library system. It was decommissioned in 1956 and turned over to the Water Department (who promptly tore up many of its unique mosaic tile floor designs and glass floors) when the Central Library at 14th and Broadway opened. The building is currently designated as the McNichols Events Center and hosts everything from weddings to bourbon tastings.

As for Carnegie, he never did see the building.

I remember my sister taking me there in the '50's and I marveled at the inlaid glass in the floors.

We've seen the pictures but can only imagine how spectacular they must have been in person. Sadly, the glass floors have not been restored. Thanks for sharing that memory with us!

It sounds like they placed a time capsule in the cornerstone. I'm so curious to know if it was ever opened!

That's the kind of thing that comes up when you dig deep into DPL archives!

Brian, I remember that prior to opening of the 1956 building (yes, that's correct in spite of the 1955 shown on the exterior) the books were moved from the original building by means of a long elevated conveyor belt installed across Civic Center Park.

Hi Ralph - You are correct. A conveyor belt stretched across Civic Center to bring books from the old building to the new one. Pretty impressive feat! Thanks for reading and commenting!

I find it odd that that the builder of the library, Gustav Wilke, is not mentioned in any of the DPL archives. Sure, Carnegie funded the project, but the builder should be mentioned somewhere.

I have a gate leg table made from the bannisters of a house torn down to make way for the libraray. Table made by Jess B Warfel 1852-1928. Jess.. I love your table, it still brings joy in 2021