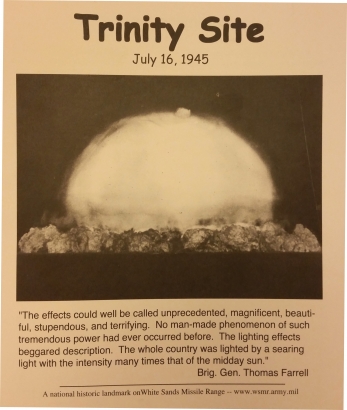 My sister and her family recently came to visit me, and as we waited for our lunch to arrive at a restaurant, I witnessed my 10-year-old nephew draw an epic war scene on the back of his children's menu. The focal point of his drawing was a giant mushroom cloud, nearly identical to pictures I used to draw when I was his age. The atomic bomb has always fascinated me. I've lived in Denver for a decade and always had, in the back of my mind, a trip to the Trinity Site in New Mexico, where the world's first atomic bomb was detonated. Last year I read American Prometheus: the Triumph and Tragedy of J. Robert Oppenheimer, further sparking my interest. On April 4th, 2015, I finally completed the trip. 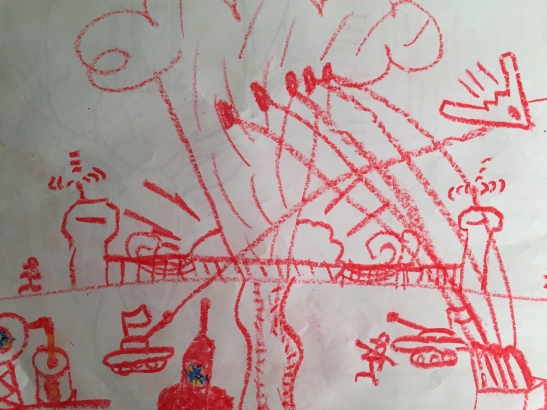 The Trinity Site is only open twice a year: the first Saturday in April and the first Saturday in October. I had always suspected that this was due to radiation levels at the site, but this isn't the case. The radiation levels are actually not that high compared to the surrounding area. According to the official Trinity Site brochure, spending an hour at ground zero results in about one-half to one millirem of radiation exposure. By contrast, living a mile above sea level, Denver residents are exposed to about 47 millirems of radiation from the sun each year. 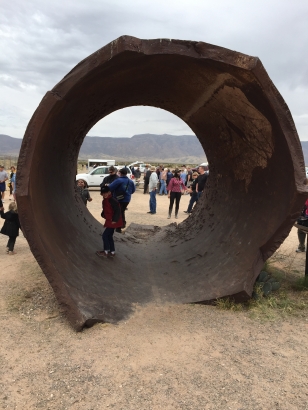 The more obvious reason the site isn't open more often is that it's on an active missile testing range. Like any other historic or natural point of interest, the site attracts large crowds of people, and they can't have the public dodging missiles and other munitions year-round. Plus, April and October provide rather nice weather for a visit to the desert.

My friend Stephen and I spent the previous night in Santa Fe and drove about 3 hours the following morning to the site, which is southeast of Socorro, NM. About half an hour after we turned off of I-25 at San Antonio, we came to an intersection and an endless line of cars. This was obviously the place.

We waited in bumper-to-bumper traffic for about an hour. Range security was checking IDs at the gate and distributing brochures. It was another 20-minute drive into the range to the Trinity Site, and like any other historic attraction, it was crowded. Hundreds of cars, a few bus tours and probably a thousand or so other folks had made the pilgrimage that day as well. The first interesting artifact we saw in the parking lot was the destroyed "Jumbo" shell, a relic from an unrelated bomb test in 1946.

Then there was a quarter-mile walk to ground zero. The entire area is surrounded by a fence and is slightly depressed, the only indication that a crater once existed there. Pushing through the throngs of people, I stood in front of a simple, black obelisk, covered in hawk droppings. The monument was erected in 1965, twenty years after the test. Now, nearly 70 years later, it was eerie to stand in the exact spot where humans first unleashed the powers of the atom. It was a mild day, in the high 60s, when I stood there. At 5:29 a.m. on July 16th, 1945, the temperature would have been over 14,000 degrees Fahrenheit.

Aside from the monument, there isn't much to see at Trinity. There are the remains of one leg of the tower that held the bomb and a low shed-like structure that protects the only remaining section of the original crater, which can't be seen. The explosion melted the sand on the desert floor into a green, glassy rock that was dubbed Trinitite. There are still pieces of green rock lying around the site, though it's illegal to take them.

We spent about half an hour at the site before heading back to civilization, having completed our history geek mission. 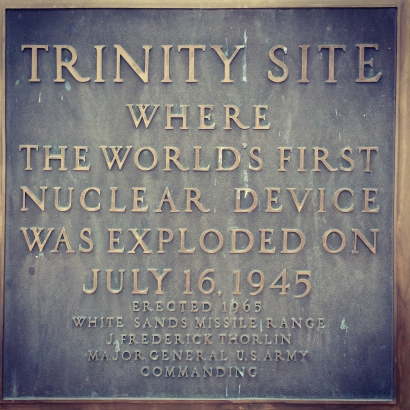 The Trinity Explosion led to increased uranium mining in the West. Western History/Genealogy has several collections that document this twentieth century trend: the Forbes Rickard papers, the Steen Family papers, and the Future/Sunflower Coalition collection.

July 16th, 2015, marks the 70th anniversary of the Trinity Test. The Trinity Site brochure now resides in the Western History Department at the Denver Public Library and can be located by the call number C623.45119 U581tr 2003.

from the science freaks thank you so much

To clarify, wasn't the " Trinity Site July 16, 1945" article published after W.W. 2? I understand the 7/16/45 test was top secret. And, a recent "Denver Post" article reports some Tularosa, N.M. residents are suing due to the effects of the Trinity blast.

Correct on both points.  The picture here is from the pamphlet that is handed out at the entrance to the site.  It was published well after the war as the test was top secret, although New Mexico residents for miles around knew something had happened.  A few weeks later when the bomb was dropped on Hiroshima, they likely figured put two and two together.

There was also a small contingent of local protesters on hand back in April, as there is on every day the site is open.

Great article that puts a modern take on the old atomic tourist era. I have some Trinitite specimens and displays.