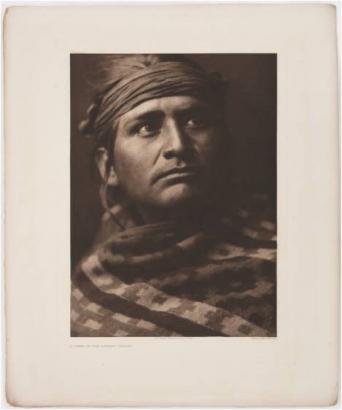 From 1907 to 1930, Edward Sheriff Curtis devoted his life to a project documenting the cultures of 80 North American Indian tribes living from the Great Plains to as far north as Alaska. The project yielded The North American Indian, a 20-volume photogravure-and-narrative set that the Library of Congress has called “one of the most significant and controversial representations of traditional American Indian culture ever produced.”

At the time of his death in 1952, however, Curtis no longer owned the copyright to the work he spent 23 years of his life creating.

Edward S. Curtis was born near Whitewater, Wisconsin, in 1868. When his parents moved to St. Paul, Minnesota, Curtis apprenticed with a photographer. In 1887, the family moved further west to Seattle. It was here that Curtis purchased a photography studio and captured the ships, shoreline, timber, mountains, and American Indians of the area with his camera. A chance encounter with George Bird Grinnel (then editor of Forest and Stream magazine) while Curtis was hiking with his 14x17 camera and glass plate negatives led to Curtis’s introduction by Grinnel into the Blackfeet and Piegan tribes.

I am certain you will be delighted to know that Mr. J. Pierpont Morgan is further assisting the Indian work by now furnishing $60,000.00 in addition to his former most generous subscription of $75,000.

Curtis sold the rights to The North American Indian to J. P. Morgan’s son in 1928. In 1935, the Morgan estate sold the rights and remaining unpublished material to the Charles E. Lauriat Company for $1,000 plus a percentage of royalties. Many of these materials sat untouched in a Lauriat basement until being rediscovered in 1972.