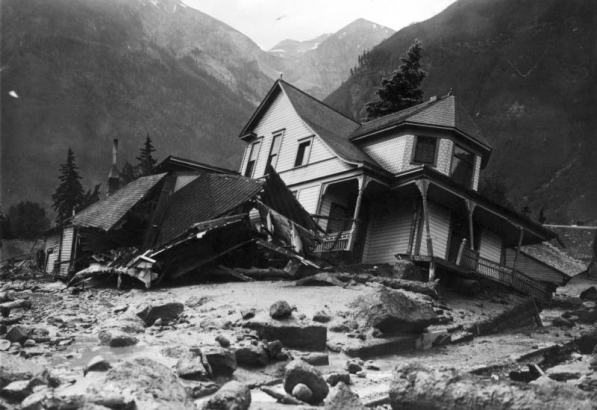 The local newspaper, The Daily Journal, devoted the following day's issue to recounting the disaster:

At 12:50 o'clock Monday afternoon, July 27, 1914, following on the heels of one of the hardest rain storms ever experienced in the city, a river of mud, very conservatively estimated at between eight and ten feet in height, swept out of Cornet Creek Canon, just north of town and traveling a southeasterly direction through town, swept everything which was in its path.

A waterspout of unbelievable volume and resulting from a cloudburst near the top of Sawtooth range directly north of town, was the source of the flood...The water dam owned by the city just northwest from the storage reservoirs for domestic purposes was completely swept from its moorings and its supply of stored up water was added to the awe-inspiring flood.

Boulders weighing half a ton were easily carried along on the crest of the big mass of mud and debris forced on by the irresistible force of the onrushing water...Huge timbers and trees were also carried down with the rush as though they had been mere chips of wood and these with the boulders were driven through houses in the path of the flood and landed high and dry ten blocks from the mouth of the canon.

The newspaper reported in detail the loss of several residences and businesses. One of the most dramatic depictions was that of the Sheridan Hotel's Grill Room, where it was said that the mud was "within a foot of the 14-foot ceiling."

Perhaps the greatest tragedy was the loss of one of the town's residents, and the newspaper reported on Mr. and Mrs. Blakley's final moments together:

Mr. and Mrs. Blakley, hearing the tremendous roar of the flood in the mouth of the canon, ran through the rear of their home, but had barely reached the gate opening into the alley when the flood struck them. Mr. Blakley was thrown to his face and crowded to the edge of the flood. Mrs. Blakley was carried down in the main current of the river of mud, her body still being unfound though several hundred men have diligently searched since the catastrophe.

Click HERE or below to view a gallery of photos showing the Cornet Creek Flood of 1914. 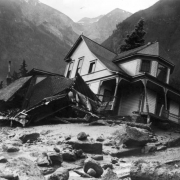 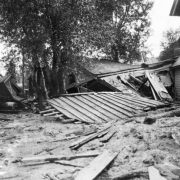 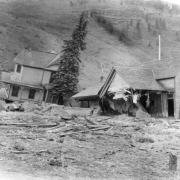 Thank you for bringing these historical moments to light. Fascinating to learn more about Colorado--often things about which we wouldn't normally have heard.

Also, newsreporting seems to have been much more graphic back in the day.

Glad you enjoyed the blog, Keeg!  Stay tuned for more posts on the fascinating history of Colorado!