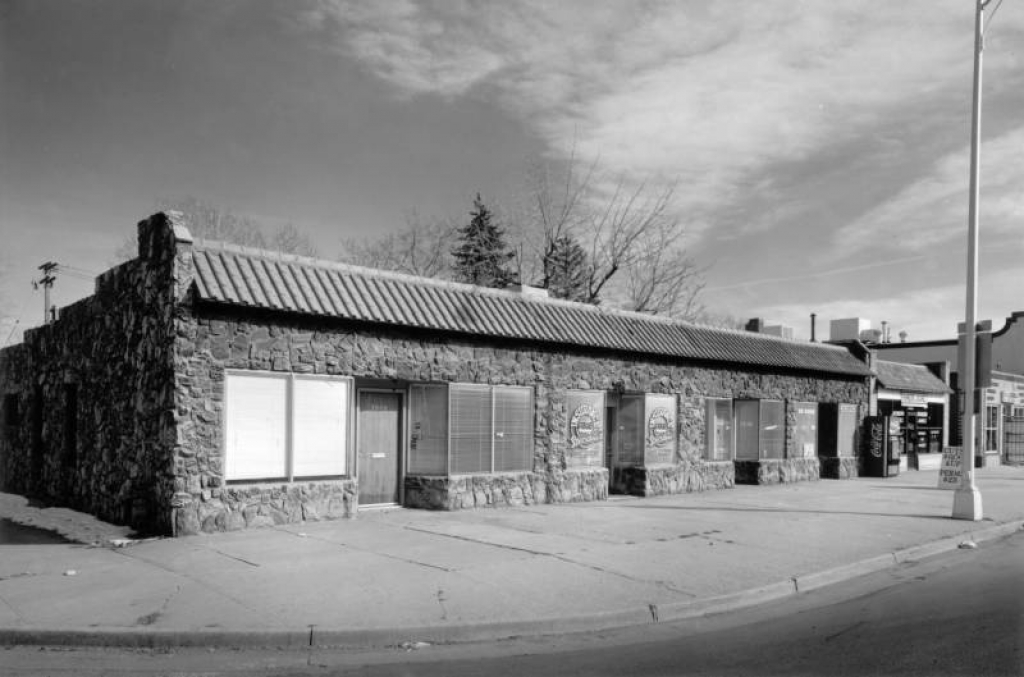 Just north of Denver’s Potter Highlands sits the community of Sunnyside. The original seed of the neighborhood was founded in 1872 and comprised a mere three square blocks between 38th and 41st Avenues and Pecos to Tejon. The current boundaries include the area from 38th to Interstate I-70 and Inca to Federal. Much of what would become the northwest portion of Sunnyside was made up of small farms and orchards.

To the northeast was the company town of Argo. Argo was largely settled by Swedish workers of the Argo smelter and those employed by the Denver, Northwestern & Pacific Railway, also known as the Moffat road.

In the 1940s, much of northern Sunnyside could have easily been mistaken for a military barracks. The Department of Defense constructed villages of Quonset huts to provide additional housing for war workers and returning veterans. This post-war period saw an explosion of modern frame homes backfill the more sparsely-distributed housing in Sunnyside and the quick development of the Chaffee Park community to its north. 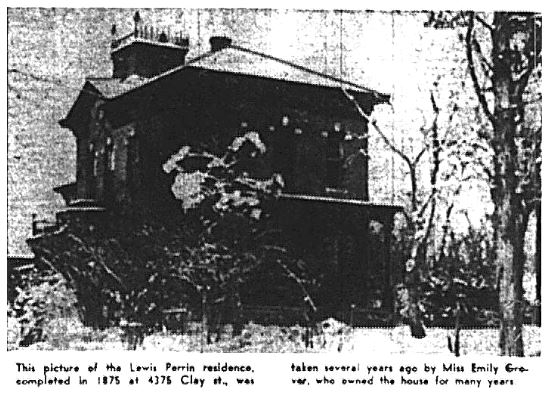 Lewis Perrin was one of the earliest farming success stories in the Denver area, and he was particularly noted as one of the first sugar beet farmers in Colorado. He began his career in the Arvada/Wheat Ridge area, but relocated in 1875 and began a large farm between what is now Federal to Zuni and 44th to 48th Avenues. South of this area down to 38th was known as Perrin’s Addition. It would be reasonable to assume this area was also part of his agricultural endeavor at some point.

The centerpiece of this property was a large, Italianate home located at what would become 4375 Clay Street. Sadly, this home was razed in 1958 to make way for a gas station. Another part of Perrin’s local legacy involved a long windbreak of cottonwoods planted along 44th Avenue. The cottonwoods stood until 1927, when the streets were widened and the trees removed. Prior to his death in 1897, much of the property was carved up into lots and acreages and small agricultural plots. 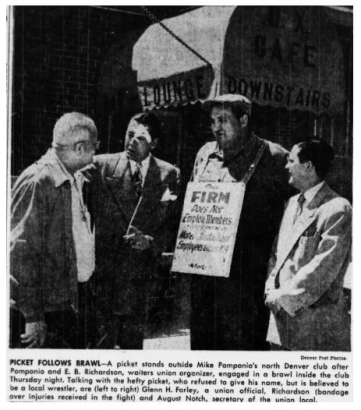 Mike Pomponio was known to be one of the most powerful political bosses in North Denver during the 20th century and resided for many years at 3958 Pecos Street. He was born in 1900, the son of an Italian immigrant who arrived from Potenza in 1885 to work on the railroad. His father was a major local figure in the Italian Americanization Council. This gave Mike a taste for politics at a young age.

By 1933, he had replaced the outgoing Thomas Morrissey as political boss of what was then known as District X or the “DX.” In his new position of power in the heart of North Denver, he worked to fortify the machine behind U.S. Senator Edward P. Costigan, who had been a founder of the Colorado Progressive Party back in 1912.

During his many decades holding political power, he also ran the DX Club, which was part social club and part political headquarters. The first location was in the Potenza Lodge Hall at 1900 West 38th Avenue, but was later moved to 1531 West 48th Avenue. The latter was known for signed photos and memorabilia from the likes of FDR, Harry Truman and John F. Kennedy.

One of the more notable events to occur at this club, and quite evocative of machine politics in the 1950s, was a fight that took place between Pomponio and a local union organizer. E.B. Richardson established a picket line at the 38th Avenue DX Club in order to recruit members of Pomponio’s staff. A scuffle ensued that left Pomponio unscathed and Richardson with a chipped tooth and bruised face. Richardson claimed Pomponio hit him with a set of brass knuckles while Pomponio insisted he had merely backhanded the man who, subsequently, hit his face on the table. It was great for selling newspapers and left no doubt as to who was running the political machinations in District X.

In the 1970s, young activists fought to oust Pomponio after his work in helping Craig Barnes oust Byron Rogers from Congress. Many were also critical of his selective support granted to Republican politicians against more progressive forces within the Democratic Party. The times were changing and he took leave from the stage to enjoy his last few years with his wife Elsie in their home just west of the old DX at 4990 Green Court. He died suddenly on January 7, 1973. 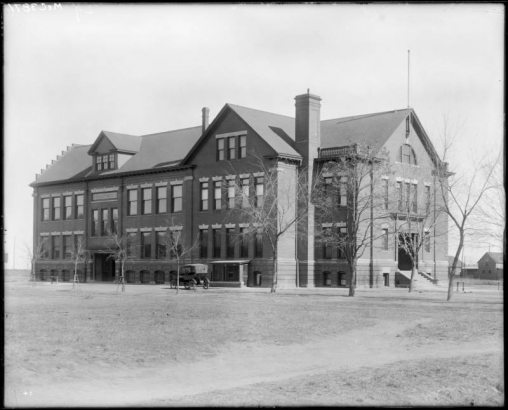 William Smedley was born near Philadelphia in 1836 and moved to Denver in 1870 because of a pulmonary condition. He was well-respected in the dental field and, within a year of setting up shop on Larimer Street, he completed a rather innovative tooth extraction using laughing gas. The Rocky Mountain News took notice of this seemingly futuristic procedure in an article in April 1871.

It was extensive civic engagement that led the city to name a school after William Smedley.  His wife Ellen was a member of the North Side Women’s Club and William was active on the board of the North Side School District 17 and, later, the Denver Public School (DPS) District 1.

The school and its 1911 wing were designed by David W. Dryden, a prolific Denver architect from Greenburg, Indiana. Work was begun in 1902, just after Smedley had resigned from the district school board. Later additions were added in 1952 and 1955.

When civil rights era busing programs came to an end, the school became much more homogeneously Latino and low income and academic performance was negatively impacted. DPS attempted to turn back this downward performance trend by proposing a bond in 1988 that would have demolished the original school and wing and expanded the less-unique 1950s structures.

Protests by the Save Old Smedley community group led to a landmark preservation designation for the school in 1992. Because of an approval granted by Denver School Board in 2014, the school is now a Montessori junior and senior high school. 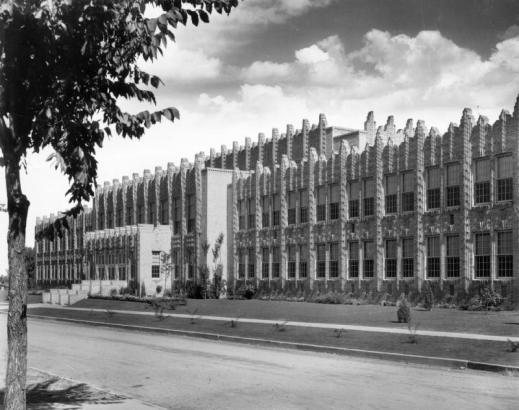 The Horace Mann School was officially dedicated in 1931 to provide a junior high school education to local residents. Its namesake was the famed American education reformer (1796-1859) who called for a public education system.

Construction began in 1930 and was completed around 1932. It was designed by famed transplanted Chicago architect Temple Hoyne Buell and presents a stunning display of ornate brickwork done in the art deco style. Buell also invoked a balanced milieu of Gothic, Renaissance, classical, and contemporary influences throughout the project.

In 1956, an addition was built onto the school, but failed to meet the high standards of the brickwork on the original building. It is suspected that the dearth of experienced masons led to the decline in quality of later work. Various remodeling of the school took place in 1978 and 1994. The building was added to the city’s list of historic landmarks on September 11, 1995.

As the demographics of the neighborhood began to shift and the Chicano Movement got into full swing in the 1970s, Horace Mann became the epicenter of conflict over how different communities are educated and how resources are allocated. Some in the movement felt that the curriculum should better reflect Latino culture.

At the same time (and through the 1980s) the white, middle class began exiting the neighborhood. Like the white flight that took place in many cities during the 1980s, isolation led to more conflict and there was even a police substation set up on school grounds in the mid 1990s.

By 2008, the campus was occupied by the TreVista School and in 2015, all middle school classes were ended. It now focuses on preschool through 5th grade. 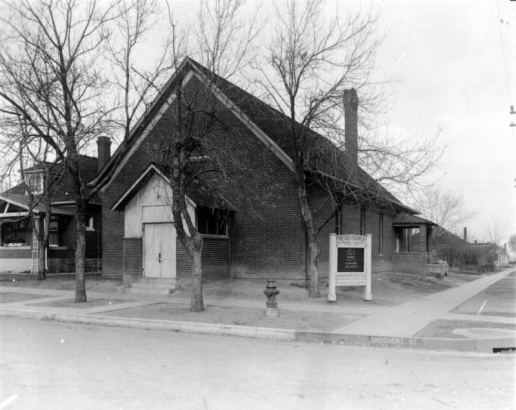 The original North Denver Friends Church was dedicated at 41st Avenue and Shoshone Street on March 12, 1899, and was presided over by Charles Stocker of Indiana. It is a simple brick building that boasted electric lighting and “regular church pews” in the Denver Times notice announcing the inaugural event. The golden jubilee took place in 1943. According to celebrants at the jubilee, the congregation had been meeting at a smaller structure at the same site since 1893. After World War II, the church relocated to a new building at 4595 Eliot Street. The original church site has since been occupied by Transfiguration of Our Lord Ukrainian Catholic Church. 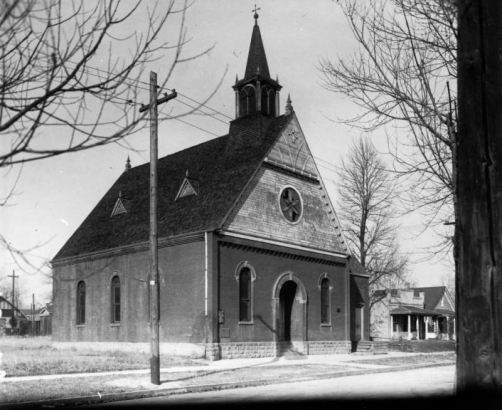 The North Denver Congregational church was established in 1894 at 3925 Shoshone Street. It has since passed through the hands of many different faiths including the Seventh-Day Adventists, a Spanish Baptist mission, El Salvador Church, and Old Landmark Ministry. It is currently the home of Iglesia Evangelica Cristiana Espiritual.

It was on June 9, 1993, that 6-year-old Broderick Bell was struck and killed by a stray bullet. This was the beginning of what came to be known as Denver’s “summer of violence.” Like many cities in America, Denver was experiencing an upsurge in gang violence through the 80s and 90s. One victim of this rash of shootings was a 16-year-old Sunnyside resident, Troy Chavez. His mother, Ana Chavez de Quintana, began planting various herb, flowers, and produce in a plot of land at 38th Avenue and Shoshone. She did so to memorialize her own son as well as other children who had been needlessly killed through gang violence.

It wasn't long before other parents, community members, and local children began contributing to the project. Eventually Elijah Pastrana and Wesley Chavez began organizing in earnest and received help from groups like Volunteers for Outdoor Colorado. Soon, the lot was transformed into a community space to promote common ground and a place for peaceful contemplation, particularly among local teens. 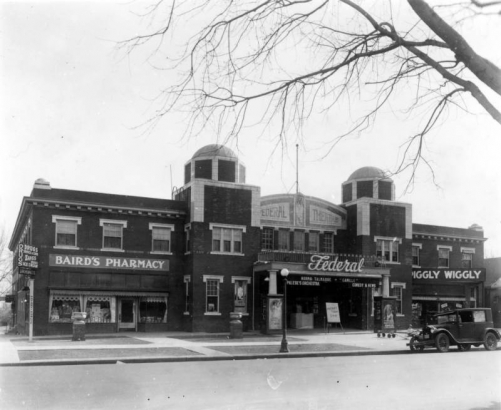 The Federal Theater and its adjoining pharmacy and grocery first opened in 1923 at 3830 Federal Boulevard. It boasted 655 seats and was part of the Lucky 7 Theatres chain until they were acquired by Civic Theatres around 1939. In 1948, it was remodeled and received the more pronounced Art Deco marquis we see on it today. It saw its final days as a movie house in the 1980s when it became a dollar theater.

In 2003, the Industrial Arts Theatre Company renovated the interior and attempted to make it a profitable playhouse. Within two years, this endeavor had failed. By 2010, it became the home of Victory Outreach. This religious group occupies the building as of today (2018).

Like most of post-war America, Denver found itself in desperate need of affordable housing for returning veterans. In April of 1946, the city council approved the plan for the Chaffee Park Heights Subdivision submitted by developer Garret Bromfield and Co. The initial boundaries of the development were between 48th and 52nd Avenues and between Tejon and Pecos. In an interesting bit of social engineering, the first 412 homes were only available to veterans with children. There was also such a run on building supplies during this period that contractors had to barter with other companies around the country for materials. One company might swap plumbing materials for wood flooring and so forth.

Chaffee Park was home to Denver’s first shopping center at 48th and Pecos. Today there is a small strip of stores at this location, but its original lineup included Safeway, Penney, Chaffee Drugs, Honey Bun Bakery, Horn Cleaners, a barber shop, shoe repair shop, and a Blue Ribbon Market delicatessen.

These neighborhoods have served as a perfect microcosm of what was happening throughout the country. Through early booms and busts, post-war expansion, demographic shifts, social strife, economic downturns and the like, these communities have continued to grow and leave their marks on Denver history. Today we see a new boom period and high demand for housing that is, yet again, changing the face of Sunnyside and Chaffee Park.