Originally constructed at 2335 Arapahoe St. in 1890, the two-story flat roofed brick house sits on a stone foundation. Simple in massing and detailing, its most distinctive features are the dentils, end brackets, and finials of its pressed metal cornice. The house was the residence and office of Dr. Justina Ford from 1912 until her death in 1952. Ford graduated from Chicago’s Hering Medical College in 1899 and practiced briefly in Alabama before coming to Denver in 1902. She was Colorado’s first Black female doctor and until her death remained the only such physician in Denver. Her patients came from a variety of ethnic backgrounds, and she served as a staff member at Denver General Hospital. In 1984, the house was moved approximately thirteen blocks to its present location in order to save it from demolition. It is now the home of the Black American West Museum. 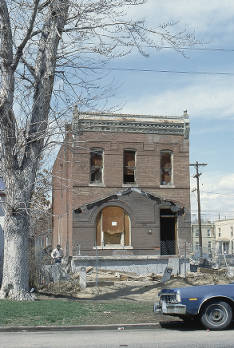