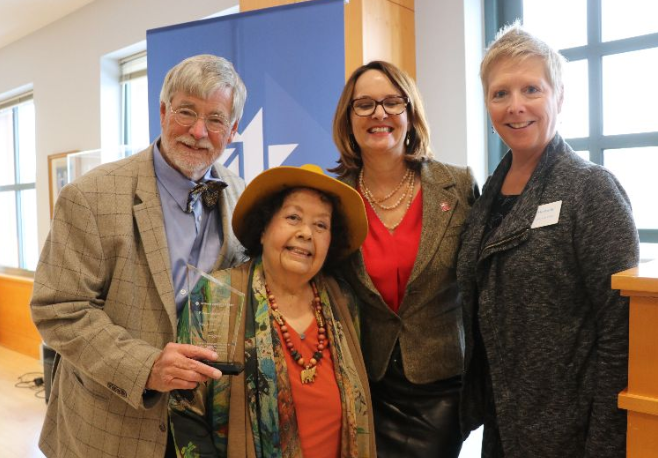 In 1999, the Denver Public Library Commission established the Eleanor Gehres Award in recognition of her longtime service and contributions to the Western History and Genealogy Department of the Denver Public Library. Her passion for enlarging library audiences and developing a remarkable and accessible research collection inspired the creation of the Eleanor Gehres Award, first bestowed on her shortly before her death in 2000.

The Award honors an individual or an organization that has made a significant contribution of library materials (books, manuscripts, photographs, maps, works of art or other items), scholarship, life-long service or bequest, thereby enhancing the Western History Collection and its value to the community.

Eleanor was beloved by many and had numerous friends and fans. Former Denver Public Library City Librarian Rick Ashton had this to say about Eleanor: "She always welcomed new challenges. She renewed our emphasis on customer service and reached out to everyone." Under her leadership, the Western History Department grew to more than 800,000 illustrations, thousands of manuscripts, hundreds of art works by famous Western artists and many rare objects, including a prized collection of "Buffalo Bill" Cody memorabilia.

But Ashton said her greatest contribution may have been bringing people to the subject of Western history. "The thing that I always thought was most impressive was the way she had a very strong focus on service to the public generally," he said.

"Western History could be seen as a kind of special place, but Eleanor was very willing to make it an inviting and helpful place for third graders doing an elementary school family history project or famous scholars coming to do research on their book."

Eleanor was born in Riverside, NJ, on Feb. 18, 1932. She worked as a schoolteacher and librarian before becoming manager of the Western History Department in 1974. She is survived by her husband of 39 years, Jim Gehres, a noted mountain climber who has scaled all 54 of Colorado's 14,000-foot peaks a total of 11 times. She was also the first woman elected to Posse Membership in the Denver Posse of Westerners and was a past president of the Colorado History Group.

In June 1996, Eleanor won the Wallace Stegner Award, from the Center of the American West at the University of Colorado. The award is given to an individual who has made a sustained contribution to the cultural identity of the West through literature, art, history, lore or an understanding of the West. This was said about Eleanor and it rings very true:

“On the road that runs between the past and the present, you have guided thousands. Through your good work, the Westerners of the past live on in our memories, and the Westerners of the present find their bearings in time. From your extraordinary commitment to history, the Denver Public Library gains its preeminence as a research center, and the American West receives its heritage.”