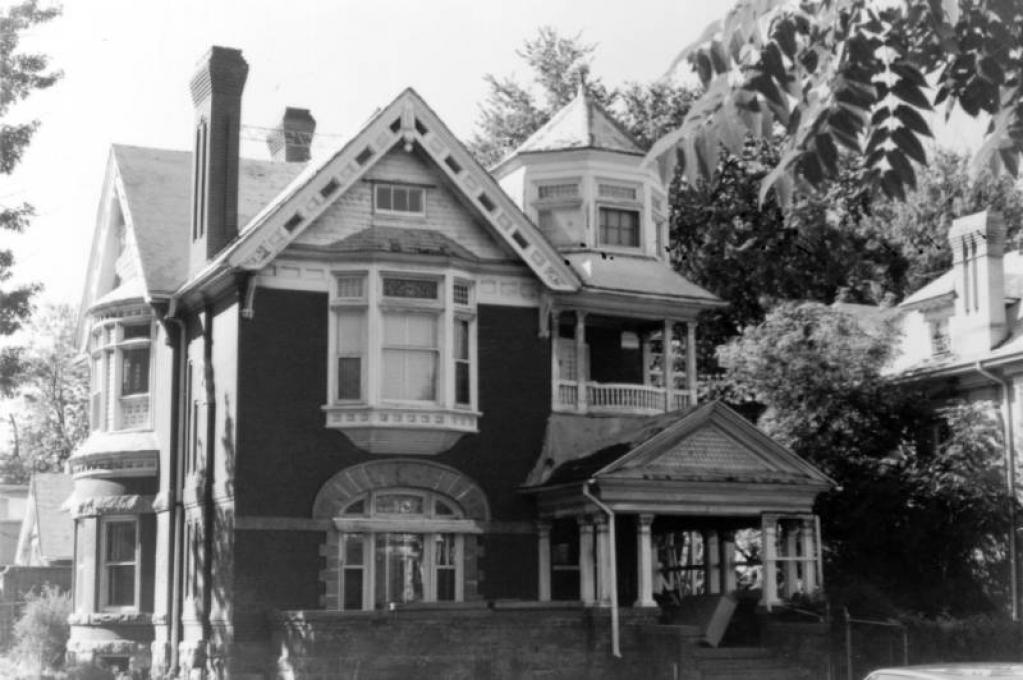 The Congress Park neighborhood is bounded on the west by York Street, on the north by Colfax Avenue, on the east by Colorado Boulevard and on the south by Sixth Avenue. The area began as Capitol Heights, which was first platted during the late 1880s, as Denver’s population rose. Platting occurred with the purchase of a complete piece of land. The new owner surveyed the property and mapped it, dividing the parcel into streets and creating a subdivision. Development of Capitol Heights occurred alongside the development of tramway lines along East Colfax, East 12th Avenue, and East Sixth Avenue.

In addition to fine single-family homes for the wealthy, many duplexes and apartment buildings were built in the neighborhood during the early twentieth century. The extreme northwest corner of Congress Park sits on land that was part of the Rohlfing’s Subdivision. This 1899 addition covered the area from Colfax on the north, Congress Park itself on the south, and from Clayton to Josephine Streets. Other Capitol Heights subdivisions include Chamberlin’s, Murray Hill, Brewer’s Second, Fisher’s Cheesman Park, St. James Heights (platted by James M. Johnson), and Frank Snell’s Subdivision (now a Historic District). St. James Heights covers the 1100 and 1200 blocks, with Clayton as the easternmost street. Brewer’s Addition is the 1400 blocks of Clayton and Detroit. Chamberlin’s Subdivision is just east of Brewer’s Subdivision. And the 1300 blocks of Clayton and Detroit comprise Murray Hill.

Moving southeast through the neighborhood, one can see a progression of architectural styles, from the delicate and intricately detailed Queen Anne and Victorian homes at the turn of the century, to stately Craftsman Denver Squares, and finally to the working-class bungalows of the twenties. The present-day boundaries of the Congress Park neighborhood are Colfax Avenue and Sixth Avenue from north to south, and York Street and Colorado Boulevard from east to west. The Congress Park neighborhood did not exist in name until real estate agents delineated it as such during the 1970s, making the area more marketable. 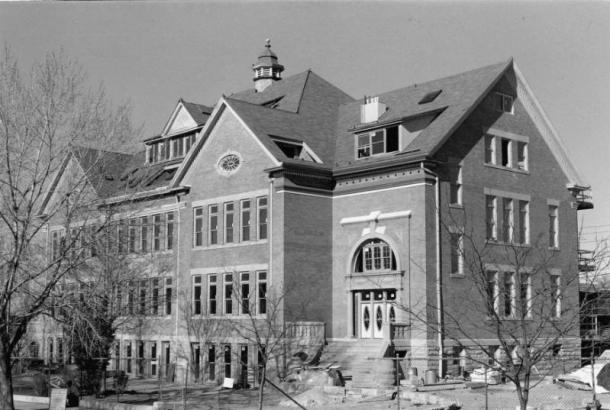 Architecturally, the Stevens School building reflected a trend away from complexity to simplicity, Victorian and Romanesque styles yielding to stoic neoclassical symmetry. The three-and-a-half-story building with central truncated hip roof and octagonal domed cupola was completed in 1900. This was the last school designed by Robert Roeschlaub, Denver’s first licensed architect. Roeschlaub, who designed many Denver schools from 1875 until 1900, also designed the Central City Opera House building and University Hall on the University of Denver campus. The Stevens School’s stonework was handcrafted by Geddis and Serie.

In 1983, the Denver School Board threatened to close down and demolish the school due to flagging enrollment. Efforts to list the school on the National Register for Historic Places failed, but a real estate developer purchased the building, subdividing the structure into residential condominiums. A series of garages were built to the school's north, on the former site of the playground. It is now an attractive reminder of how architectural integrity can be preserved while adapting structures for modern purposes. 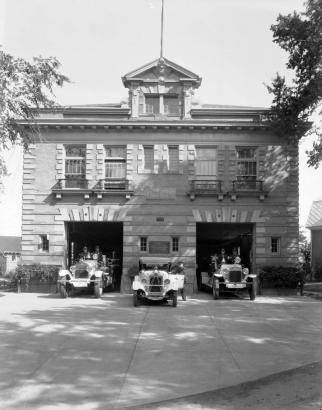 Construction on the 6,000-square-foot building began in late 1903. It boasted a crew bathroom, complete with eight sinks, a fourteen-foot-high tin ceiling, and two brass fire "drop poles." The building housed Engine No. 15 and Hook and Ladder (Truck) No. 4. Its architect, John J. Huddart, came to Denver from England in 1882 and designed many other Denver buildings as well, such as Montclair High School; the Hartwig, Taylor, and Florence Buildings; the Evans Vault at Riverside Cemetery; and Charles Boettcher's residence.

The Denver Volunteer Fire Department was first organized in 1866 and continued to operate on a volunteer basis until 1881, when paid companies were organized from the volunteer forces. Denver's Fire Department was rated by insurance companies at the turn of the century as among the best organized, managed, and equipped in the country. Firehouse No. 15's days were numbered when the pumper truck pulled out and the crew moved to another station in December 1987. The following year, a single family purchased the firehouse and began renovation to convert the garage, dormitory, and barnlike space on two floors into their home. Today the building has been transformed into two lovely units, side by side, each with loftlike ceilings and huge windows where the garage doors for the trucks once were. 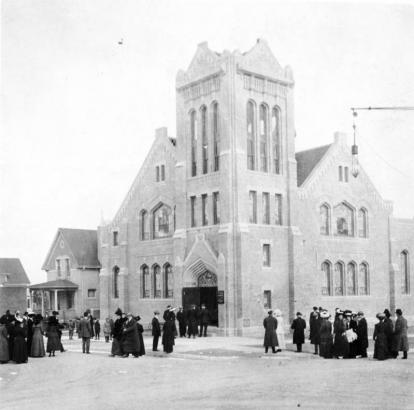 Once known as one of "Denver's most durable churches," Capitol Heights Presbyterian Church was founded in a tent in 1895. The original sanctuary cost $16,000 to build after the lot, located at the corner of East 11th Avenue and Fillmore Street, was purchased in January 1911. When it was dedicated in 1912. "Welcome," printed in the stained glass above the door, greeted worshipers entering from Fillmore Street.

The yellow brick church, a modified Gothic Revival style, features a corner tower with tall, arched stained-glass windows and elaborate decoration on the eaves of the gabled roof. The church was built by architects Montana Fallis and Robert Willison. In 1926, Willison (1865-1935), once one of Mayor Robert Speer's "most trusted advisors," designed St. Cajetan Catholic Church, 9th and Lawrence, the Spanish Colonial Revival style.

Rich dark walnut, light oak mixed with tones of walnut, and blond and mahogany paneling were added to the interior during the 1956-7 remodeling of the church. A memorial chapel for private meditation with a capacity of 400 and a separate entrance was also constructed. 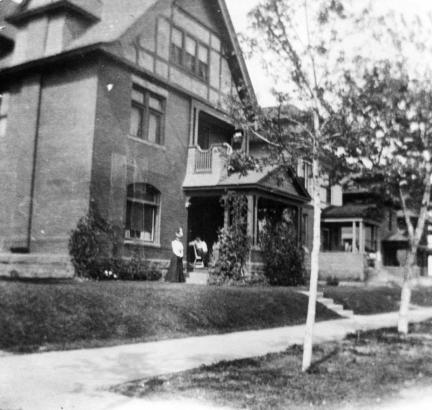 Like his neighbor at 1316 Columbine, the original owner of this house was a military man. Gen. Frank Hall raised the first Colorado Militia in 1861, the year William Gilpin was appointed Colorado's first territorial secretary from May 1866 to March 1874 and additionally served as a member of the State Military Board, as attorney general, and was elected as the city treasurer of Denver in 1893 and county treasurer in 1895.

Frank Hall's wife, Susan Matthews, was the niece of Shuyler Colfax. Just after the Civil War, she toured what had been the territory of Colorado with her uncle Schuyler, who was then a member of General Grant's party. Susan was a longtime member of the Republican party. In 1901-2, the Halls were listed in the Social Year Book of Denver.

Frank Hall not only served as the mining editor of the Denver Times and Denver Post, but also was the secretary of the Butterfield Overland Dispatch Company, which later became Wells, Fargo, and Company. The company's original purpose was to construct a telegraph line from the Kansas border to Denver and Central City.

In 1894, Frank Hall was quoted as saying, "Before the crash came in 1893, Denver boasted the largest army of landed millionaires to be found west of the Missouri River." Susan Hall purchased this land in 1894. They remained in this Victorian home until their deaths, Frank twenty-two years earlier than his wife, Susan, who died in 1939.

After serving successfully as a nursing home, a child-care facility, and a dormitory for students of the ministry, this home was purchased and renovated in 1980 by a group of seven women. The house has many architectural details of note, including the keystone and arched brickwork above the first-floor window, dentil detailing, and gable-end half-timbering.