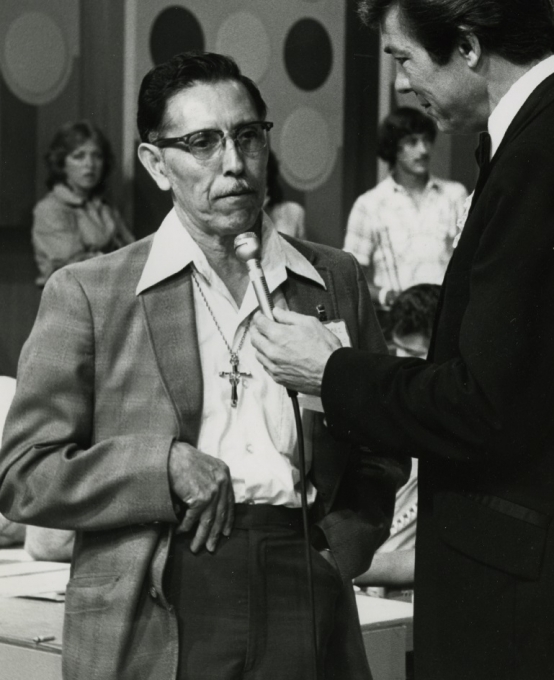 Influential labor leader, lobbyist and activist who fought for the rights of workers throughout Colorado.

Tiburcio Gaitan Flores was born August 11, 1919, in Saltillo, Mexico. He and his parents fled to the United States to escape the violence of the Mexican Revolution when he was only six months old.

The Flores family lived in Texas for several years before moving to Pueblo, Colorado, in 1926. Tiburcio (who went by Tim) attended school in Pueblo until his father was laid off from his job at the Colorado Fuel and Iron Company during the Great Depression. The family moved to Greeley, Colorado, when his father found work in the sugar beet fields there.

Tim left school after his freshman year of high school to find work. He wanted to help earn money for his family, who was very poor. He did different jobs around Greeley and gave the money he made to his parents, so they could afford to pay rent and buy food for Tim's siblings.

When Tim was seventeen, he left his family to return to Pueblo. In Pueblo, Tim worked as a railroad section hand for the Denver and Rio Grande Railroad. Tim was able to send the money he earned working on the railroad back to his family in Greeley.

In 1942, Tim was drafted as a soldier during World War II. He was sent to serve in the United States Army even though his family were undocumented immigrants, not citizens. Tim was part of an artillery unit of the 94th Infantry Division. Tim made his way through the ranks and was promoted to corporal.

Tim was stationed in Germany when the war ended in 1945. While in Germany, he received the news that he would become a naturalized citizen of the United States in return for fighting in the War. In 1946, Tim’s contract with the Army expired, and he returned to the United States.

Tim made his way back to Pueblo and enrolled in the Pueblo Vocational School. He graduated with a certificate in auto mechanics.

After finishing his certificate, he became an apprentice at the Colorado Fuel and Iron Company. He was the first Mexican American to complete an apprenticeship through the company. He also earned his GED in 1947, since he knew an education would help him later in life.

That same year, he married Guadalupe “Lupe” Martinez. Lupe was a nurse and a native of Pueblo, though her family came from Mexico. Like Tim, she was fluent in both English and Spanish. Lupe and Tim knew that having pride in their Mexican culture was very important, so they would not forget their heritage in the United States. 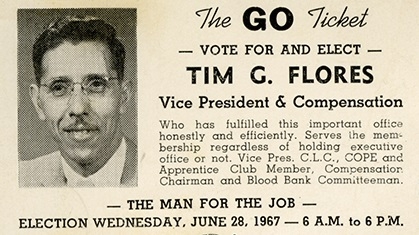 In 1950, Tim completed his apprenticeship and was hired by the Colorado Fuel and Iron Company as a bricklayer. He joined the United Steelworkers of America, and was very involved with the union.

In 1958, Tim was elected Vice President of the Pueblo chapter of the United Steelworkers of America. He served two terms. Tim loved helping workers as vice president of his union. Tim was very proud of being from a working-class family. He knew that workers were the people who kept the United States running smoothly. He wanted to make sure that workers were treated with the respect that they deserved. Tim realized he could make this dream a reality by becoming more involved with labor unions.

In the 1960s, Tim moved from Pueblo to Denver, where he was able to work more closely with unions. In 1963, Tim was elected vice president of the Colorado Labor Council AFL-CIO (American Federation of Labor and Congress of Industrial Unions). He held this office until 1969. The AFL-CIO was a very powerful union. Tim helped negotiate higher wages and good contracts for workers in many industries. He helped people working for oil companies, railroads, atomic energy plants, factories, and on farms. Tim led strikes when companies did not listen to workers’ demands. He wanted to make sure that workers had a voice just as powerful as the people who ran the companies.

Not everyone liked Tim for doing this, however. One night, while Tim and his family were watching television, a noise like a gunshot rang out and shattered the living room window. It turned out to be a brick that someone Tim had angered threw through the window. This was meant to scare Tim away from speaking up for workers. Tim did not let this stop him.

Tim worked as a lobbyist for various unions. This meant that he went to the Colorado House of Representatives to try and convince lawmakers to pass laws that would help workers in Colorado. Tim also lobbied for other people he thought needed more representation in the government.

He helped fight for the rights of undocumented workers. Tim knew their vulnerable status as people without citizenship meant they could be forced to work long hours for low pay.  He lobbied on behalf of people with disabilities, the elderly, and veterans as well. One of Tim's fellow labor leaders remembered that "If the cause was just, it became Tim's cause." Tim wanted to help the people around him however he could.

A sign Tim owned from his participation in the Chicano Movement, a civil rights movement for Hispanic and Latin Americans

Tim knew that to be a successful advocate for workers, he would have to be skilled in the law and politics. He took summer classes in labor law at the University of Colorado, and worked on many presidential campaigns. He was especially active in the campaign to elect John F. Kennedy president. In addition, he always tried to keep his education current. He took advantage of his union’s training and education programs in order to maintain and improve his skills as both a worker and a union officer.

Tim encouraged young people to focus on their education above all else. He knew without an education, it was almost impossible to help enact change in the world. Tim inspired people in his community to work on behalf of others, and to make sure everyone was well taken care of. Tim was a founding member of the Latin American Research and Service Agency (LARASA), an important group dedicated to helping Latin Americans and Hispanic Americans.

Tim’s dedication to helping workers, especially undocumented workers whose rights were at risk, is remembered to this day.

A portrait of Tim Flores is at the Colorado Convention Center in Downtown Denver, as part of a mural honoring important people in Colorado history. The Labor Council for Latin American Advancement (LCLAA) has a scholarship fund in Tim Flores's name, to honor his love of education.

laid off - when a company can no longer afford to pay workers, and eliminates their jobs

workers union - employees who organize to bargain with their employer over wages, hours, benefits and working conditions

GED - General Equivalency Diploma: a series of tests which show that a person who did not go to high school has the same level of education and understanding as a high school graduate

vulnerable - at risk of physical or emotional attacks or harm

advocate - a person who publicly supports a particular group or policy

Tim Flores always fought for what he thought was right, even if it made people angry.

Tim was very proud of his Mexican heritage. What is your heritage? What do you know about it?

"The Flores Legacy Lives On" (Article about Tim Flores's influence on his son, Dr. Estevan Flores, in La Voz Bilingue.)