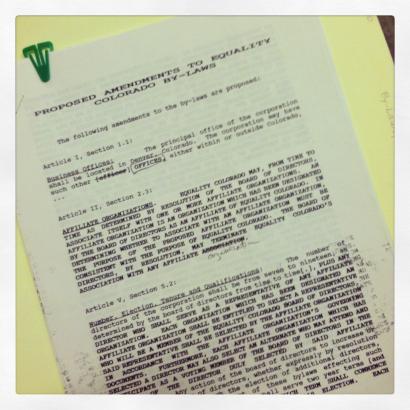 Many in Denver are celebrating PrideFest this weekend, so for this week's Saturday in the Archives I thought it would be interesting to highlight the records of Equality Colorado, one of several collections in the Western History/Genealogy Department related to GLBT history, issues, and events in Denver.

Equality Colorado was a political organization whose mission was to promote equal rights for Colorado's gay, lesbian, bisexual and transgender communities and their families through non-partisan state legislative advocacy. It was formed in 1992 on the heels of the passing of Amendment 2, a measure that banned local laws from protecting gays from discrimination. The focus of the group at that time was to inform the public about Amendment 2  and coordinate political work within the gay, lesbian, and transgender community, including lobbying and preparing for the next campaign. In 1996, the U.S. Supreme Court overturned Amendment 2. Equality Colorado continued as a political advocacy group. Three separate projects took up most of their time: lobbying in the legislature, the Voices of Faith program, and the Colorado Anti-Violence Project.
In 2001, Equality Colorado dissolved. Voices of Faith was absorbed into the Colorado Anti-Violence Project, which became an independent organization. Some board members from Equality Colorado formed Equal Rights Colorado as a liaison to interested parties on gay, lesbian, bisexual and transgender issues and related legislative proposals.
The records of Equality Colorado (WH1787) include correspondence, meeting minutes, financial documents, press releases and newspaper clippings. Papers of groups that were precursors of Equality Colorado (from 1988 to 1992) form a small portion of the collection. Also included are newsletters published by Equality Colorado as well as sample newsletters and articles about and generated by other organizations.
Come visit us to see this collection and learn more! Other GLBT-related collections at the Western History/Genealogy Department include the Evans v. Romer papers (WH2102), Colorado Aids Project records (WH868), Dee Farrell papers (WH1183), Denver Nevaar-Sister Who papers (WH749), and Anthony Palange papers (WH1230), among others.