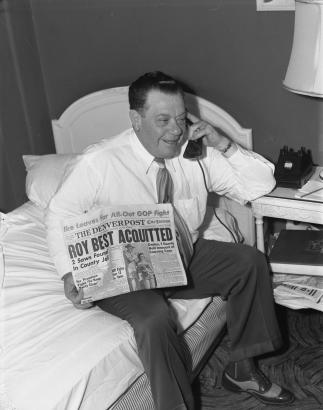 This photo is from the Rocky Mountain News Negative Collection. The image shows Warden Roy Best in a hotel room holding up the paper acclaiming (or proclaiming?)  that he was "Acquitted of all Charges". But in a few short months he would be dead, before his reinstatement as Colorado's Canon City Prison Warden. He had quite a life leading up to his untimely death.
He served as a state patrol officer and was a driver for Gov. Wm. Adams. The Governor knew him because of his father's 'Boone Best' appointment by Gov. Adams to become Warden of Canon City Prison in 1927. Though Boone only lasted a few short months as Warden, due to a train/car accident, Gov. Adams appointed Roy as Warden in 1932. Roy loved the fact that they were the only Father-Son combo in U.S. penal history to be appointed by the same Governor.
The year before Best's appointment, the prison had one of the most destructive riots in its history. Roy had the responsibility of rebuilding the entire physical plant. He was credited for rebuilding the complex at minimal cost to the public. He improved safety conditions for guards and established single cell occupancy for the first time. He was also known for creating a national industrial system, which employed most of the prisoners in his care.  He had a reputation as being a fair man with the prisoners, but he was also known to employ the use of "Old Gray Mare". This was, in fact, part of his downfall. The "Old Gray Mare" was a sawhorse that the prisoner was forced to lie over and receive "Lashes" with a wet leather strap.
In 1951 Governor Thornton, after an extensive visit to the prison, brought charges against Warden Best for using corporal punishment, flogging and misuse of prison funds. The first photo shows the end result of his acquittal on all charges but one. He had been suspended from 1952 through 1954 but died of a heart attack three days before being reinstated as Warden.
Attending his funeral, were four former Colorado Governors and a Federal Judge. According to one of the local newspapers 'Colorado was far better; the State Penitentiary was a far better institution, because he "Best" ran it.'