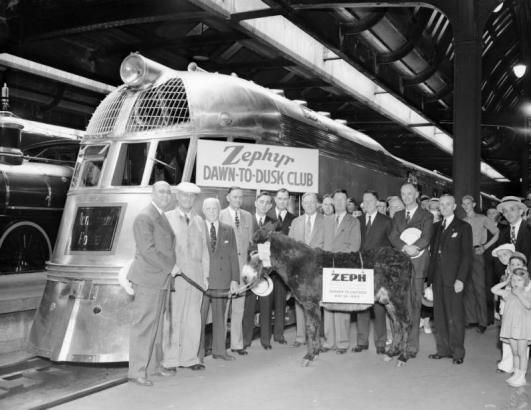 We here at Western History/Genealogy have made the decision to transform "Weird Photo Wednesday" into "Wow Photo Wednesday," for the simple reason that "Wow" casts a much wider net than "Weird." While "weird" can also be "wow," "wow" is not always "weird"... you get the idea.

Today's entry is a photograph of the "Dawn to Dusk Club," a group of passengers who rode aboard the Pioneer Zephyr during its promotional, record-setting run from Denver to Chicago on May 26, 1934 to mark the Century of Progress World's Fair.

For the promotional run, it set a speed record for travel between Denver, Colorado, and Chicago, Illinois, when it made the 1,015-mile non-stop "Dawn-to-Dusk" trip in 13 hours 5 minutes at an average speed of 77 mph. For one section of the run it reached a speed of 112.5 mph, just short of the then US land speed record of 115 mph. The historic dash inspired a 1934 film and the train's nickname, "The Silver Streak." The train is generally regarded as the first successful streamliner on American railroads.

It operated this and other routes until its retirement in 1960, when it was donated to Chicago's Museum of Science and Industry, where it remains on public display.

Today, the California Zephyr is Amtrak's longest route (2,438 miles, from Chicago, Illinois to Emeryville, California) and one of the most scenic, with views of the upper Colorado River valley in the Rocky Mountains, and the Sierra Nevada including the breathtaking Donner Pass area. It's a wonderful way to see spectacular Glenwood Canyon in western Colorado, with the glass roof making it possible to look upward at the towering cliffs beside the Colorado River.

The mascot-burro, "Zeph," was donated by the Rocky Mountain News, and Ralph Budd [fourth from the right with wire rim glasses], one of the dignitaries on the trip, and President of Chicago, Burlington and Quincy Railroad, when asked about the burro, replied "Why not? One more jackass on this trip won't make a difference."

It sounds that your dad had a great time. I will email you soon in regards to the images you spoke about.