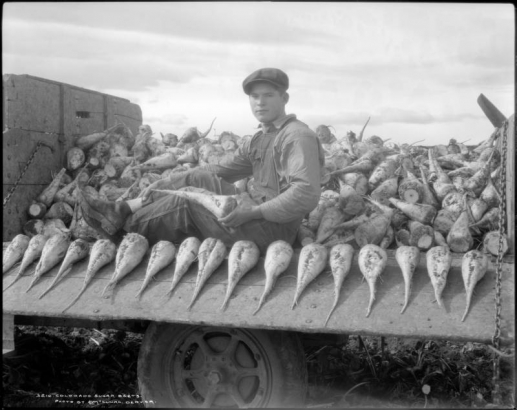 Wow ~ A staple of Colorado agriculture, "beta vulgaris," the sugar beet, is displayed here in all of its humble glory. Unlike sugar cane, which grows in the tropics, the sugar beet thrives in temperate zones, and has been a reliable cash crop in Colorado since the early days. In 1747, when Andreas Sigismund Marggraf, professor of physics in the Academy of Science of Berlin, Germany, discovered that sugar could be extracted from beets, they were much smaller and produced less sugar, about 5% of their weight. Selective breeding has developed the beets we have today, which yield up to 20% of their weight in usable sugar.

Beet sugar was experimented with in the United States in New England. The “Beet Sugar Society of Philadelphia” was founded in 1836 and promoted home-produced beet sugar as an alternative to the slave-produced cane sugar from the West Indies or sugar imported from Asia (called "free sugar" because it was grown without using slavery) but which tasted "awful." The first successful beet sugar produced in the United States was in 1870 in California, and by 1915 the industry was thriving. The Colorado climate, with warm days and cool nights, produces excellent beets. However, since sugar beet crops exhaust the soil rapidly, crop rotation is recommended and necessary. Normally, beets are grown in the same ground every third year; peas, beans or grain are raised the other two years.

The Western Sugar Cooperative is a grower-owned American agricultural cooperative that has been part of the sugar beet story in Colorado since the beginning.

The organization is headquartered in Denver, Colorado. It has five refineries, located at Fort Morgan, Colorado; Scottsbluff, Nebraska; Torrington and Lovell, Wyoming; and Billings, Montana.

A search in our Digital Collections results in 82 photographs pertaining to sugar beets, and hundreds more references to books on the Beet Sugar Industry, manuscripts and other publications expanding on the history of the Sugar Beet industry in Colorado. We also have many books about GMO, or "Genetically Modified Foods."

Interesting. Thanks for the background on sugar beets. I had known about Mr Boettcher's connection, but was glad to learn more about the beets. As the Go-gos would say, we got the beet(s)!