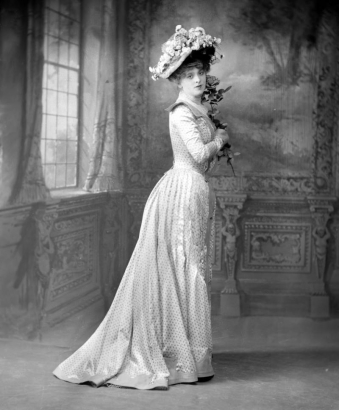 Wow ~ Sometimes a photo captures an entire era, and this Rose and Hopkins photo of actress and comedienne Jobyna Howard conjures up the central esthetic of late 19th Century advertising. In fact, Charles Dana Gibson, the famed artist, modeled the "Gibson Girl" after this woman, among others. His idealized woman had an exaggerated S-curve torso shape achieved by wearing a swan-bill corset. Images of her epitomized the late 19th- and early 20th-century Western preoccupation with youthful features and ephemeral beauty. Her neck was thin and her hair piled high upon her head in the contemporary bouffant, pompadour, and chignon ("waterfall of curls") fashions. The statuesque, narrow-waisted ideal feminine figure was portrayed as being at ease and stylish.

Gibson himself said: "There isn’t any ‘Gibson Girl,’ but there are many thousands of American girls, and for that let us all thank God." (New York Times 11/20/1910)

There was merchandising of the Gibson Girl on the level of Mickey Mouse or Star Wars. Large size books ("table albums," they were called), china plates and saucers, ashtrays, tablecloths, pillow covers, chair covers, souvenir spoons, screens, fans, umbrella stands...all bore the image of Gibson's creations. There was even a wallpaper for bachelor apartments, with the lovely Gibson faces in endless array. A popular turn-of-the-century hobby, pyrography, saw people burning the Gibson Girl into leather and wood and the image was traced and stitched into handkerchiefs. There were plays, songs, and even a movie based on his creation.

Our digital collections contain an almost endless array of fashion and style variations, which are usually searchable by keyword, partly because costume styles are useful in dating photographs, many of which have little else to rely on for that information. Simple searches for words like "bodice," "lace" or "hat" yield hundreds of photographs of men, women and children, providing a vast palette of images for "historical people watching."