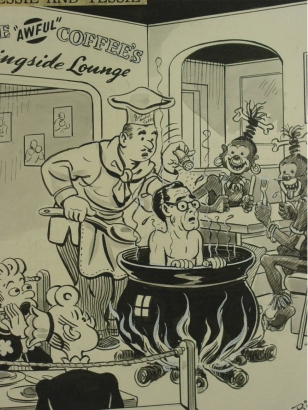 Today's "Wow" photo is a digital image of a newspaper cartoon from the Joe "Awful" Coffee Collection, and it's typical of the colorful, edgy and bombastic nature of a long-time Denver celebrity and "household name" ~ Joe "Awful" Coffee. The caption, not included in the scan, says: "Joe will go to any length to please an individual appetite." (That's Joe himself in the stew pot). Though the only part of the story that has to do with coffee is the man's name, it seemed appropriate for the "all things brewed" BrewHa!Ha! September events organized by the Denver Public Library.

Born Joseph Rutowski, near Minsk, Russia, in 1905, Joe was the onetime featherweight boxing champion of the Rocky Mountain region, and eventually became the proprietor and main entertainment of a beloved Denver landmark, the "Ringside Lounge." On lower 17th Street for 23 years, his restaurant catered to sports fans and athletes of all kinds, with a special focus on boxing. His was the only bar/restaurant in Denver that stayed open later than 8 pm, and he catered to all the important people, including a visit once by General Dwight D. Eisenhower, who showed up at 11 pm with a party of 40. Impresario Arthur Oberfelder used to bring in ballet dancers, opera stars and actresses, and Joe would jump on their tables and belt out his own off-key renditions fo "O Sole Mio."

His establishment was designed around a sports theme, and the booths were draped with ropes like prizefighting ring. Autographed photographs and caricatures of sports celebrities lined the walls and Joe appeared in some of the drawings, which included several cartoons by Milton Caniff, creator of the Steve Canyon strip, and drawings by Ham Fisher, artist for Joe Palooka. Most of the collection was donated to the Denver Public Library when Joe sold the restaurant in 1965.

The 5'1" powerhouse started boxing when he was in High School, in Pueblo, Colorado, for $5 or $10 prizes, after getting guidance from "Fireman Jim" Flynn and Charlie "Kid" Bell on how to get around the ring without getting knocked out. Joe missed his graduation ceremony from Pueblo Central High School, to be in an important match in Denver. When his mother heard what he was up to, she called the station master at the depot and told him not to sell her son a ticket. So, he hitchhiked to Denver and fought in the match that established him as the flyweight champ of the Rocky Mountain Region.

That was the night he got his name - when the announcer asked Joe's name, he didn't understand the answer. Jack Carberry, a Denver sportswriter who knew Joe, was sitting at ringside. Carberry had been trying for some time to convince Joe that "Rutofsky, the Newsboy Kid" wasn't a fighter's name, and he leapt to his feet, shouting: "His name is Coffee. Awful Coffee." That night he beat Kid Plank, and fought for another 10 years, earning $200 to $300 a fight. He finally quit fighting because of his mother's opposition, but the real impetus was a fight in Omaha.

Fred Dawson, later football coach at the University of Denver, saw the Omaha fight and was interested in Coffee mainly because he was from Pueblo. He asked Joe to help him recruit football players in Pueblo for DU. Coffee produced a dozen athletes for a recruiting dinner Dawson gave. Dawson offered Coffee a chance to go to college on a scholarship, and promised him a job to earn expenses.

"My mother cried from happiness when I told her I was going to quit fighting and go to college," Coffee said. Coffee worked for Dawson as an assistant trainer, then a full trainer, and graduated from DU in 1930 with a degree in economics and business. Later he earned a graduate degree. Along the way, he began a romance with Dorothy Hoffman, daughter of a Pueblo rabbi, who looked Joe up when her family came to Denver. They were married July 7, 1941.

After graduation, Coffee went to work for the May Company, in Denver. He got into the restaurant business on impulse in 1943, when the president of the store refused to give him a raise.

"I went into the Stockholm Cafe on 17th Street to get a soft drink while I thought about quitting," Coffee remembered. "The fellow behind the counter said to me: 'You don't know anybody who wants to buy a joint, do you?"

"He wanted to sell the place. I never ran a restaurant in my life, and I didn't even like 'em. But I inquired the price. It didn't sound bad, so I went over to the bank and got a $1,000 check for down payment, and a contract we both signed." 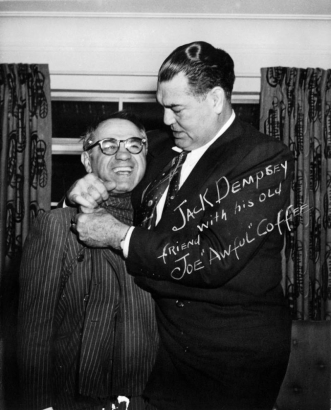 His proximity to Union Station assured that he had a lot of business. He arranged to get the best steaks, difficult to find during the rationing of the war years, and he also gave discounts to military recruits, another way to bring people in the door. Within a few years, Joe "Awful" Coffee's Ringside Lounge was a must-see stop for visitors to the Queen City of the Plains.

Well established, Coffee found time to help others. He taught boxing to boys in orphanages and at Denver's Clayton College for Boys. During his restaurant days, he would send cabs or buses once a week to local orphanages to pick up youngsters who had birthdays that week and gave them a party at the restaurant, followed by a movie at a downtown theater. He also participated in the Kid Gloves boxing program on television which featured outstanding orphan boxers. He also sent regular donations of meat to the orphanages. "That's what I've done in my life that I love the most," Coffee said. "Helping those kids. That's the main Joe Coffee." Joseph Rutofsky "Joe Awful" died on March 10, 1994 at the age of 88, and was buried in Denver's Mount Nebo Cemetery.

Explore this fascinating collection online in our Digital Collections, where we have a small sample of the larger Joe "Awful" Coffee Collection [Photo Collection 127]. The information for this blog entry was gleaned from articles by Frances Melrose and Gene Amole. 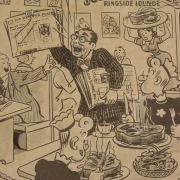 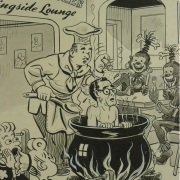 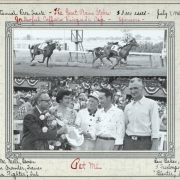 This was a fantastic read, Randel!

That's quite a story!

i am looking for a photo of the outside of joe's place. went there many times, and would love to see what the outside looked like.

Hi Daniel - thanks for commenting! The best image we could find of the outside is in our Digital Collection. Be sure to use the zoom in feature and you'll see the Joe "Awful" Coffee sign on the right behind the Milner Hotel sign.

My dad, Richard, knew Joe Coffee through his young boxing endeavors at Mt. St. Vincent Orphanage, where he grew up. Mr. Coffee would volunteer his time there teaching the kids the sport. I certainly don't remember this, but later (when I was about 3 years old) my dad and mom took me to Joe's restaurant where I alledgedly dumped a bowl of oatmeal on my own head!

Hey Steve -
That's great - he was quite famous - when I meet elderly people from Denver, I always ask if they knew him and they often have stories - not usually as good as yours - it's a great mental picture - you and your oatmeal - thanks!

My dad used to take us to Joe's. The cheese cake was the best ever dry in the New York style

My Grandpa Raymond Dennison was the Chef at Awful Joe Coffees in the 50's. There is an article in the post or Rocky Mountain news that interviews him about the best way to cook steaks!

Thanks for sharing, Pam! Sounds like he knew what he was talking about.

Thank you for a great remembrance of how Denver supported each other, and how someone grew to prominence through hard work and love for each other.