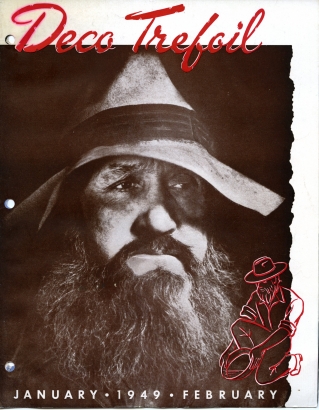 "...for the benefit of engineers. It is an exchange of operating data from successful milling plants thoughout the world, including helpful operating hints, laboratory notes, and new metallurgical developments. Written by and for metallurgists, engineers and millmen... published by the Denver Equipment Company to help the mining industry improve metallurgical practice."

Denver Equipment Company commenced operations in 1927, and published their newsletter through the early 1960s.

Though it sounds like a dry subject, apparently the editors of the newsletter felt obliged to fill their publication with as much interesting content as possible to go with all the mining tech-talk. There are plenty of articles, details and diagrams about the company's ore processing machinery, but frequently the stories are about mines or other mining facilities in exotic and interesting places like Venezuela, Mexico, Peru, Africa, Colorado, and anywhere valuable minerals are found.

Often there are nice short "nutshell" articles about places or people, like one about Mount Rushmore, and another about "How Miners Built the First Schoolhouse in Colorado." Every issue has a joke column, with little quips and stories, all very chaste and appropriate to the era. Some of the stories cover cultural events of the locations in question, often with interesting photographs. There is some indexing, thanks to the General Index, to Deco Trefoil articles. 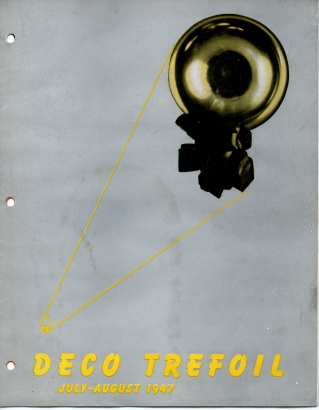 One of these stories, which explains the "flotation process," a technique that helps separate valuable minerals from the plain earth and rock they are embedded in, is fascinating.

"Among the wonders of the world is the manner in which a flotation bubble carries its heavy load of mineral to the surface. Millions of these tiny bubbles rise to the surface every moment, but seldom do we have the opportunity to actually see the attached load as portrayed on this Trefoil cover. The photograph was made by Professor H. Rush Spedden of the Massachusetts Institute of Technology. The photographic process employed is described as follows:

Particles of one hundred mesh galena were floated in a small pneumatic flotation cell designed to fit on a microscope. The photograph was made with a Leica camera having a microscope adaptor. The microscope, inclined horizontally, was focused on a point just inside the wall of the glass flotation cell. Magnification of the bubble appearing on the cover is about 300 diameters.

Among the most interesting tales concerning the origin of the flotation process is that of Carrie J. Everson, a Colorado school teacher. In 1885 she is said to have discovered that oil coated bubbles had an affinity for some minerals and would cause them to float. Sacks of ore shipped to her brother's Denver assay office had become soiled with oil and grease. It was probably strictly her feminine trait [sic] which caused her to wash the sacks, but it is a tribute to her observation that she noticed how the oil tended to bring valuable mineral particles to the surface while allowing the gangue to settle to the bottom of the tub."

The column goes on to discuss the "high state of perfection to which flotation has risen," mentioning the Denver Equipment Company's own "Sub-A Flotation Machines," and then introduces a more in-depth article about the process by A. M. Gaudin, Professor of Metallurgy at MIT.

Gaudin explains how bubbles in liquid are used to draw out particles of valuable ore mixed in a slurry of the finely ground raw mined material. He puts it like this:

"These bubbles have the job of selecting certain types of solids from the many others that are simultaneously present in the swirling mud, attaching themselves to the selected particles, and rafting them to the surface, where they form a froth, sometimes evanescent and brittle, at other times permanent and tough. This foam varies not only in mechanical properties but also in feel and color. Sometimes the froth simulates liquid gold or bronze, as when the flotation process is applied to copper ores; at other times it has the silvery yet blue-black luster of freezing lead. At other times it looks like honey or is dead-white, chocolate, or even delicately pink or lavender... flotation can be used to purify the liquor in which rayon threads are formed, to discard the ink from pulped secondhand paper, to separate crystals made in chemical processes, and to remove certain parts of wheat grains from others in the course of flour milling."

(Gaudin's history of the flotation process begins with Muhammad ibn Mansur, a Persian scholar, in 1491, and does not mention the Colorado schoolteacher.)

The "froth flotation" process revolutionized the mining industry as one of the great enabling technologies of the 20th century. The places where this work is done are called "concentrators or mills." The different minerals extracted require a variety of acids, salts, oils and bases, in differing amounts depending on the desired result. The non-valuable "gangue," or "leftovers," are called "tailings," and these are the piles that dot the landscape in mining areas. This explains why the pollutants and environmental impacts arising from the mining industry need special containment. Here are some pictures from our Digital Collections of flotation tanks.

The other part of this story is the fascinating cover art that graced the Deco Trefoil through the 1940s. Sometimes, but not always, related to the topic of mining, the covers usually featured striking photographs, and graphics and titles of the WPA and Deco styles circulating at the time. There was no apparent fixed "style sheet" for the cover, and the title-logo changes radically every month, something that is extremely unusual in the publication business. Originally rescued from the trash, these scans of covers are from my own collection, which caught my eye for their graphic impact.

The Denver Public Library has bound volumes of the entire Deco Trefoil publication, here. Our Digital Collections include almost 7,000 items with "mining" as part of their subject matter, and we have a huge collection of books, directories, maps, and manuscript materials related to the mining industry. Mining was the main economic driver of Colorado's early prosperity, and primary source material, and research resources in general pertaining to mining are one of the Western History/Genealogy's strong suits. 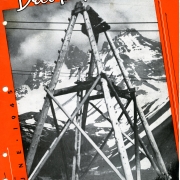 In the Rocher dé Boulé Mountains near Hazelton, British Columbia, serving the Red Rose Mill of the Consolidated Mining and Smelting Company of Canada, Ltd. Photo by H. M. Wright.
June, 1945
Telluride, Colorado, from the La Plata ridge above town. 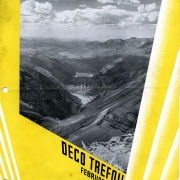 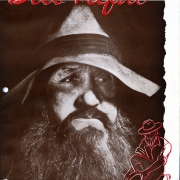