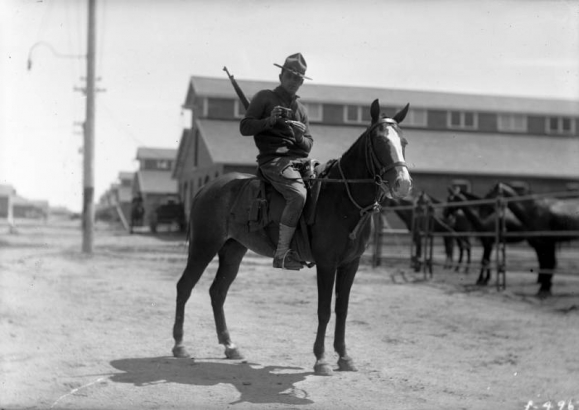 Sunday, November 11, marks 100 years since world leaders signed the Armistice that ended World War I, the supposed War to End All Wars. In the run up to this auspicious occasion, we ran across a photo that brilliantly captures the bravado, naivete and humanity that were the mainstays of American involvement in that horrible conflict.

The photo (GB-7579) was taken by local photographer George Beam at Fort Logan, sometime between 1917 and 1918, when it still served as a operational military base. The site today serves as a military cemetery and mental health facility. It depicts a young soldier astride a beautiful horse looking confident enough to take on the German Army all on his own. (And while it may look to contemporary eyes that he is pointing a camera at the photographer, he's actually rolling a cigarette.) Fort Logan was a staging area for troops that were heading off to battle across the Atlantic.

Plenty of young men on both sides of the conflict headed off to the front with this same aggressively confident attitude, and sadly, a great many of them never returned. Their confidence was oftentimes no match for the brutal conditions they would face on the front lines.

That said, the American Expeditionary Force was able to tilt the scales and help speed the end of the war. The price they paid was, of course, obscenely high. Close to 117,000 Americans died in the conflict, from everything from bullet wounds to influenza. While the American losses were staggering in their own right, they joined a massive number of dead soldiers from both sides that may have totaled as many as 10 million souls (and that's to say nothing of the roughly 7 million civilians who died in the conflict, or the suffering of the people left behind).

Sadly, the War to End All Wars didn't live up to its title or even come close to it. Armed conflict has plagued all parts of the world continuously since the end of WWI and will likely continue long after the somber remembrances of the November 11 Armistice have passed into memory. That means young people will mount horses, or their 21st century equivalents, and strike brave poses before heading off into a fiery, likely fatal, unknown, and 100 years from now, we may be doing the same thing all over again.

Have a happy Veteran's/Remembrance/Armistice Day.