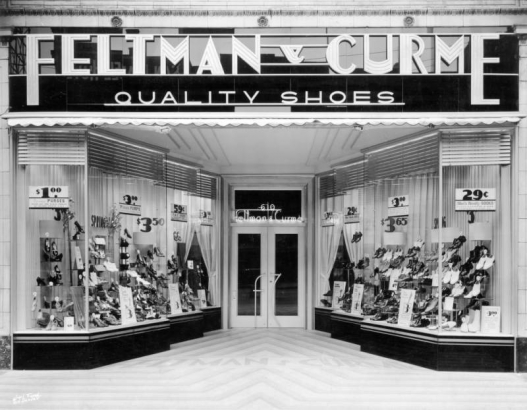 Crisp art-deco in steel, marble and terrazzo, and three dollar shoes gets today's WOW. Every time I see this photo I want to put it on the cover of a book, or get a big print to frame for the den, or something, as long as I can keep looking at it. It's got everything: high contrast, snazzy lines, and great fonts. What's not to Wow? And the real thing, this shoe store at 610 16th Street in Denver, was undoubtedly an eye-catcher for people strolling the sidewalks in Denver's chic and bustling downtown, back in the days when men put on a tie and a hat just to go out the door, or when a woman wouldn't be seen without high heels and full movie star makeup.

The Feltman & Curme shoe company was founded around 1912 by Arthur Allen Curme Sr., Charles Henry Feltman, and Harry C. Starr in Richmond, Indiana. Arthur's family was in the parchment and leather trades though he was himself a book keeper and court reporter and did not go into the shoe business until after he retired from that. The headquarters were in Chicago, and they had stores in Denver and at least 44 other locations coast to coast. The company was run by Roland Feltman after Charles H. Feltman passed away, and was operating at least as late as 1957.

This particular store was in the 1922 Steel Building, at Sixteenth and Welton Streets, which was home to the Bohm-Allen Jewelry Company, and which after a 2008 renovation has been reborn as the "Sage Building." Feltman-Curme, canny businessmen that they were, also simultaneously ran another store just down the street in the Tabor Opera Building. We have a scant few photos for "Feltman-Curme," here.