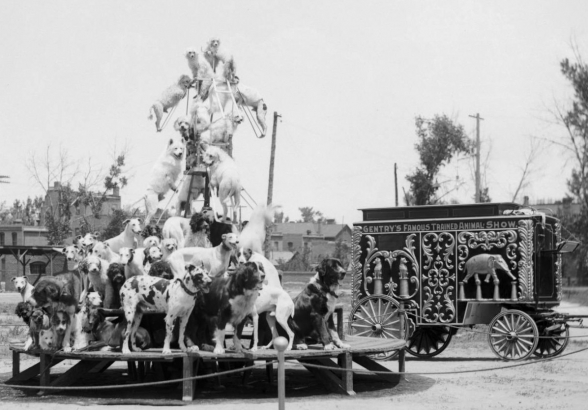 Animal behavior is a reliable way to get a "wow" out of people - a few minutes on Facebook can provide enough kitten-kissing pit bulls, alligator-swallowing snakes, and talking Huskies to fill anyone's needs, almost to excess - I mean how many times can people watch that cat pushing the remote off the table?

People were no different in the "old days," and though a century of technology has put a circus sideshow at our fingertips, it's possible that we miss the excitement and novelty that a traveling animal act could bring to a town to brighten the dusty dog-days of summer.

"Gentry's Famous Trained Animal Show" was an act that showed up all over the western United States, and that appeared in Denver during the years from 1899 to 1901. The Denver Times Newspaper reported in June 1899 that "There is an appearance of cleanliness and prosperity about the entire exhibit that is a trifle above the ordinary tented show." In June, 1900, we read:

"The dogs, horses, ponies, monkeys, and gayly caparisoned men of the gentry show made a great hit with several streets full of children this morning. The parade demonstrated that the Gentry Bros. keep their pleasing entertainment thoroughly up-to-date in every way."

"The Gentry Brothers turned thousands of people away last night. Not counting the matinee today, only four more performances remain to be given, so it's a case of 'go early if you want to get a seat.'"

Today's sensitivity to the plight of animals has reduced the numbers of these kinds of "shows," and elevated standards of care have made sure that the remaining ones adhere to an "appearance of cleanliness and prosperity" that assures the animals are not being abused, an obvious concern even a hundred years ago.

Below are shown more newspaper clippings from Meriden, Connecticut and San Francisco, California about the Gentry Brothers Show: 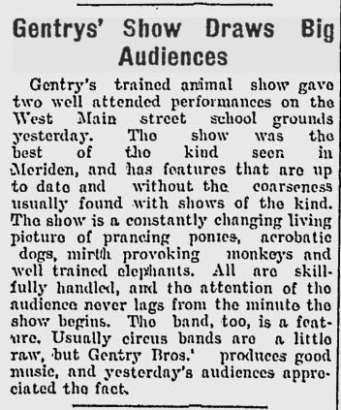 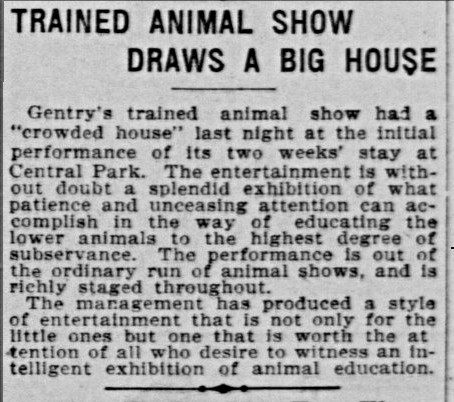 The photograph above and the eight others in our database documenting the Gentry show in Denver come from the History Colorado collection.