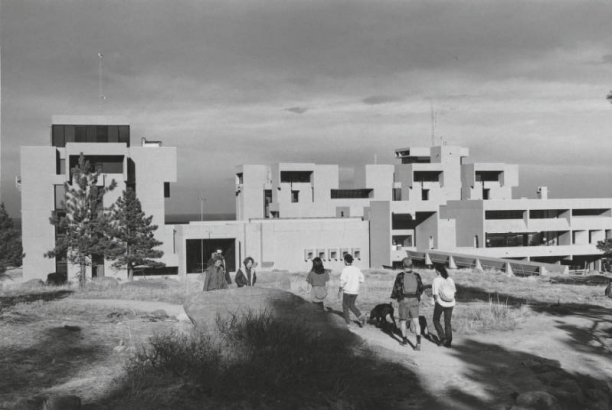 Wow ~ Modern Architecture does exist in Colorado! The National Center for Atmospheric Research (NCAR) building at 3090 Center Green Drive in Boulder, Colorado was designed and built in the Modernist (or "Brutalist") style in 1967 by Chinese / American architect I. M. Pei. Unlike his other Colorado buildings, this design features a more hive-like motif, recalling Moshe Safdie's "Habitat" in Montreal, or even Paulo Soleri's "Arcosanti." The complex uses many elements of cubist design, and the walkways are arranged to increase the probability of casual encounters among colleagues.

Once the laboratory was built, several problems with its construction became apparent. Leaks in the roof caused difficulties for researchers, and the shifting of clay soil beneath caused cracks in the buildings which were expensive to repair. Still, both architect and project manager were pleased with the final result. Pei refers to the NCAR complex as his "breakout building," leading to many other projects and a burst of growth to his career.

Ieoh Ming Pei, born April 26, 1917 (and still going strong at 98!), commonly known as I. M. Pei, is a Chinese-born American architect. In 1948, Pei was recruited by New York real estate magnate William Zeckendorf. There he spent seven years before establishing his own independent design firm I. M. Pei & Associates in 1955, which became I.M. Pei & Partners in 1966 and later in 1989 became Pei Cobb Freed & Partners.

Pei has won a wide variety of prizes and awards in the field of architecture, including the AIA Gold Medal in 1979, the first Praemium Imperiale for Architecture in 1989, and the Lifetime Achievement Award from the Cooper-Hewitt, National Design Museum in 2003. In 1983, he won the Pritzker Prize, sometimes called the Nobel Prize of architecture.

The National Center for Atmospheric Research was originated by a small group of innovative scientists, most of them university faculty members, as a creative response to major challenges that faced the nation in the years between the 1930s and late 1950s. They were interested in studying "climate" rather than just "weather" as most meteorologists at the time were doing.

In 1960, NCAR began operations in Boulder, Colorado, as a program of the National Science Foundation (NSF) managed by the nonprofit University Corporation for Atmospheric Research (UCAR). At the time it funded the creation of NCAR, NSF itself had been in existence only ten years.

Today, NCAR provides the university research and teaching community with tools such as aircraft and radar to observe the atmosphere and with the technology and assistance to interpret and use these observations, including supercomputer access, computer models, and user support. NCAR and university scientists work together on research topics in atmospheric chemistry, climate, cloud physics and storms, weather hazards to aviation, and interactions between the sun and earth. In all of these areas, scientists are looking closely at the role of humans in both creating climate change and responding to severe weather occurrences.

Here is the NCAR Website. You can see photographs of other Colorado I. M. Pei buildings in our database, here. The NCAR building is among the three Colorado buildings that were used as stage sets in the Woody Allen movie, "Sleeper," the others being the arboretum at the Denver Botanic Gardens and the "Sleeper" or "Flying Saucer" house in Genessee.