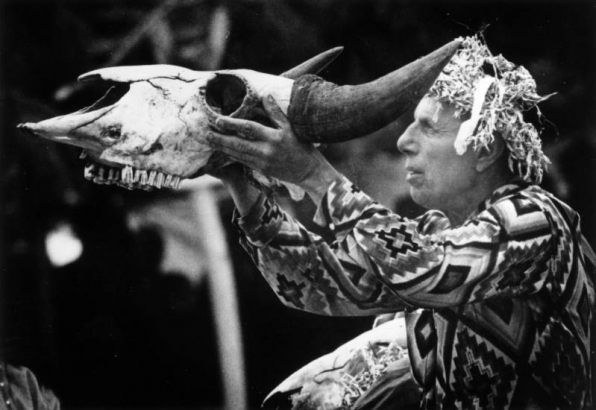 Iron Eyes Cody, famous for the once well-known "Keep America Beautiful" commercial in the early 1970s, and for movie roles, most notably in "A Man Called Horse," was for years Hollywood's face of Native America. Beginning his acting career in the 1930s, he portrayed the "Noble Indian" in over 100 films, as well as in many TV shows. The photograph is "wow-worthy" simply as an image, but when I learned the full story, the "wow" changed slightly.

Born Espera Oscar de Corti in Louisiana on April 3, 1904, "Iron Eyes Cody" was "100% Italian," according to his half sister in 1996. It is said that he lived as an Indian and was a great supporter of Native American causes, though Wikipedia says this with a "citation needed" note. Cody died in 1999, and despite the subterfuge, he left a legacy in the collective memory of the idealized Native American, though with a big asterisk next to it.

I remember that public service spot. It made a great impression on me. I still won't litter. But as I drive along the highway(north I25) I am dismayed at all of the trash that I see. I shed a tear like Cody did. Keep America Beautiful. Please.

Thanks so much! Yes I loved how I was able to work that in to the blog - it still resonates: "Keep America Beautiful."

I remember that commercial from the 1970's when I was living in Puddingstone, New Jersey, what a fantastic, powerful commercial, I wish people saw the commercial now so they won't pollute, everyone should Keep America Beautiful, I do!!