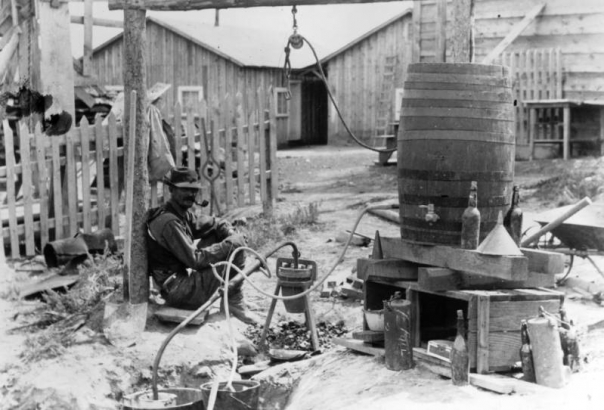 This photo gets a "Wow" on several levels. The title, which was written on the back of the photograph, is "Miner's Still," but on closer inspection it appears that it's probably an improvised smelter, with the gravity-fed fuel in the barrel feeding the jet which is aimed into a crucible. This is how miners extract the precious metals from rock in which they are embedded, with extreme heat.

The story of how the photo was identified is almost as interesting as the picture itself, in another way. In my "tending" of our photo vaults, I came across a number of old albums that had been cataloged, but in only a cursory way, and that needed more work, especially in adding exact locations to make them easier to locate. One of the albums in this group had such minimal information in the catalog record, that I decided to look into it a little more deeply to see if I could add any details. Sure enough, on one of the pages, the words "Bohannon Creek" were written in pencil, in such a way that the words were only legible by angling the page in the light just so.

Some quick internet research revealed that "Bohannon Creek" was a well known hydraulic mining gold field in Idaho, and so now the catalog record for that album has a location and more accurate dates. This is typical of the many minor victories we experience here in Western History, when we can correctly identify something. But the fun doesn't stop there.

A few pages further into the album I came across today's Wow photograph. I had seen the photo in our database many times, and knew that its catalog record stated that the location and dates for the image were unknown. On the album page, under the photo, in pencil, was written: "F22807." Searching the database with that number brought me to today's photograph, and made the final "Aha" connection.

When there's an "F number" with a photograph, that means that in the "old days," before digitization, someone had a copy of that photograph made. That meant that the album was taken to Roach Photos, a longtime Denver photographer that did our copy work, and they made a negative of the photo. Then the photo was printed, and one print went to the customer, and another went into our collection. The negative was given an "F number," and filed with our negatives. Unfortunately, the connection to the original location of the photo, in the album, was lost, and so for many years, that negative and copy photo had no identification or connection to its original home.

Now, because our thorough cataloging, and our decision to put the F numbers in the photo records, and because of the wonder of digital searching and interconnection, the record for the photo in the database now gives the correct location and dates for the photo, and links to the entire album, and the record for the entire album, now properly located, mentions the digitized photograph and provides a link. Now, when you see an "F" number in one of our photo records, you'll know what it means, and how it can be used to connect dots that may have been unconnected for decades.

Here's a link to the Bohannon Bar Hydraulic Mining Album, and you can find more details on the photo by following the links. Enjoy our collections, and join our many users who have found and made amazing connections similar to this one between our wide variety of images.

This photo does have a lot of neat and fascinating wow! From my research of turn of the century mining methods and pouring through period mining and milling books. Here is what I believe that the picture depicts. This is a small operation miner using a portable mercury amalgam retort. He has a iron tripod holding the retort above a hot coal fire. The retort is made of iron, opens like a plastic easter egg and closes air tight. The pipe that goes up out of top the retort is for the vaporized mercury to escape and pass through the condensing water jacket. Once cooled back into a liquid, the mercury will run down into the lower container to be collected and reused over again. This also separates the precious metal from the mercury. The water jacket is the thicker tube in the middle where water in the other tube from the wooden barrel flows through by gravity.

The amalgam can be from many different concentrating sources, a sluice box, stamp mill pans, ball and rod mills, clean up barrel, etc. Mercury attracts fine gold and other precious metals. For example for a stamp mill, mercury is spread on a copper plate the same width of the output of the stamp battery box outflow. The stamp mill pulp flows over the plate and down the sluice. Once the mercury is very concentrated (amalgam) it is removed from the copper plate with a putty knife or scraper. This typically put into a durable container and into a locked safe in the mill. Once a good amount of amalgam is collected, it would be processed in a retort. Once the mercury is vaporized off the concentrate, mostly precious metal is left in the bottom of the retort. These wanted materials are then sent to a smelter to be purified into bullion and poured into a bar or button.

The gasses that come out of the lower condensed end can contain traces of mercury vapor, and other noxious gasses from other minerals in the concentrate. This is why they are doing this task outside. Hopefully the man tending the retort is sitting upwind. Hopefully too he has also washed his hands well before packing his pipe with tobacco. If this is his steady day to day job at the mill his life expectancy is going to be shorter than normal. Someone always had to tend the retort, as the “pay” is in that iron jar.

Notice also the mercury flasks on the ground by the wood crate. They are cylinders with a small nipple on the top. On the wood blocks under the water barrel is a wide funnel and a narrow funnel. These are likely to pour the condensed mercury back into the flasks. These flasks when full, can weigh around 76 pounds. Mercury is a super heavy element and possibly that is why there is a pulley hoist above the retort and a wheel barrow in the background. Mercury was also sold in glass bottles and crock jugs that look like moonshine jugs. Hence the play on words: miner and his still.