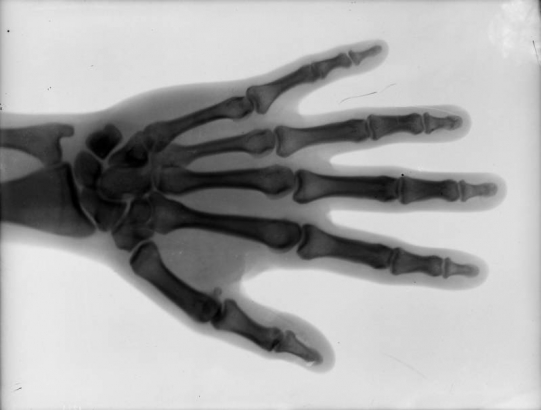 Wow - why do we have x-ray photos in our Digital Collections? Because Harry Hale Buckwalter, who made this photograph, had wide-ranging interests, among them x-ray photography, hot air ballooning, and high speed motion capture, three of his pursuits that played a role in his photographic career. The Harry Buckwalter collection of photographs is owned by History Colorado, and is part of the Library's Digital Collection as a result of the collaboration between our two institutions during the early phases of the project, back in the mid 1990s.

Eric Paddock, Curator of Photography at what was then the Colorado Historical Society, says that Buckwalter's photographs "stand out among those of his contemporaries because they are eclectic and sometimes audacious, and because Buckwalter's personality and visionary charm show through in every print. While many other photographers single mindedly pursued their specialized subjects, Buckwalter dabbled in every kind of photography, from portraits to landscapes and from spot views to aerial views... Buckwalter was fascinated by the technological developments of his day, and was quick to experiment with gadgets of all kinds. He was an inventor, a balloonist, a radio pioneer, and an eccentric gentleman scientist with a youthful sense of fun.... Buckwalter's sure knowledge of his subjects' importance made them noteworthy in their own time, and historically resonant in ours." 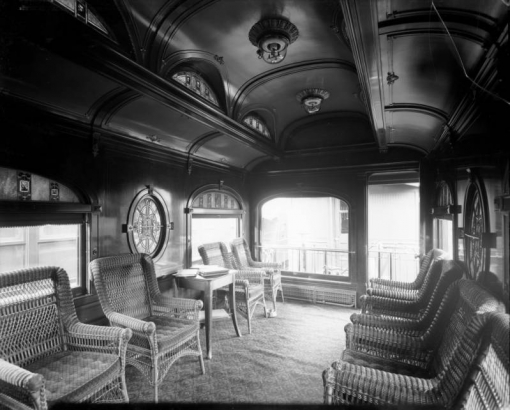 Harry Hale Buckwalter (1867-1930), was for thirty years a well known and prominent Denverite and colorful personality who was remembered by his family and friends as a man ahead of his time. Any scientific event seemed to spark his interest; when the city's first neon sign was to be lit, he loaded family and friends in the car to be among the first to view this new lighting invention.

Born in Reading, Pennsylvania, Harry headed west at the age of 16, and came to Colorado Springs where he met his future wife, Carrie Emmajean Fuller. By 1887 records show him living in Denver at the Metropolitan Hotel, and in 1889 he married Carrie and they moved to a house at 622 South Tremont Street [now Elati]. By this time he had begun his career at the Denver Republican, and when his interest in photography began in 1892, he was working for the Denver Photo Supply Company located in the Mining Exchange Building. 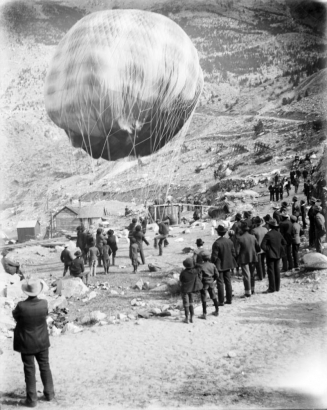 In the course of his work, Buckwalter became acquainted with the famed balloonist Ivy Baldwin, who agreed to take the young newsman on a flight launched from Elitch Gardens in August 1894. His participation in the flight caused a sensation in Denver, enhancing his reputation even more.

In 1895, Buckwalter produced the first x-ray photographs made west of the Mississippi River as an experiment sponsored by the Rocky Mountain News. The success of these tests resulted in Buckwalter delivering lectures on the subject at the Homeopathic College and to his being called as an expert witness in a medical malpractice suit in which his testimony led to the use of one of his x-rays as evidence. The case is considered a landmark as the first admission of an x-ray as evidence by a court in America, and perhaps in the world as a whole. He also worked for the Colorado Midland, Colorado & Southern Railroad, and Pikes Peak Cog Railroad, providing advertising photos of trains and spectacular scenery. He photographed the completion of the Panama Canal in 1913, and traveled nationally as a spokesman for Denver and the wonders of Colorado.

There are 1,957 photographs from History Colorado's Buckwalter collection in our Digital Collections, available for online viewing, here. Information for this entry was gleaned from "Buckwalter - The Colorado Scenes of A Pioneer Journalist - 1890-1920," by William C. and Elizabeth B. Jones.