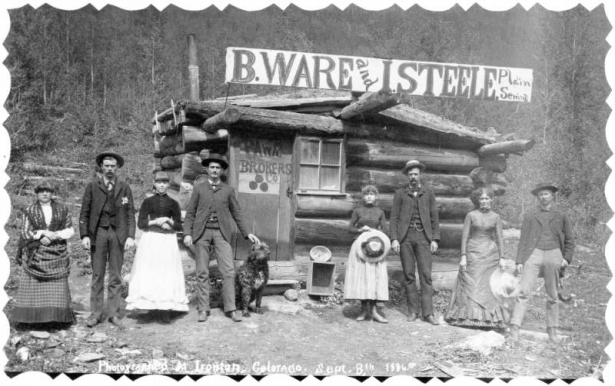 Today's "Wow!" goes to this great image of a business in Ironton, Ouray County, Colorado, taken on September 8, 1886. Displaying honesty and humor unheard of today, the owners have chosen to make signs that warn potential customers about what happens inside, probably getting away with it by being the only business in town. "Beware" and "I Steal" are hardly advertising catch phrases, but since everybody knew everybody else, the store's sign was just probably just a friendly local joke.

The photo is part of the Thomas M. McKee Album, which is a fascinating little part of our collection that deserves a little documentation, so here goes:

Thomas McKee was a long time resident of Montrose, Colorado, where he was one of the first settlers in 1887, after leaving his home in Nashville, Tennessee, bound for Sitka, Alaska. A letter from a friend, A. E. Buddecke, who owned the opera house in Montrose, informed McKee that there was no photographer in town, and that he would probably do well there. McKee and his family settled in Montrose, where he started a photography studio. He also had studios in Ouray and Old Dallas, and became a semi-celebrity in western Colorado where he became intimately acquainted with the remaining population of Ute Indians, and became somewhat of an expert on their customs and way of life. 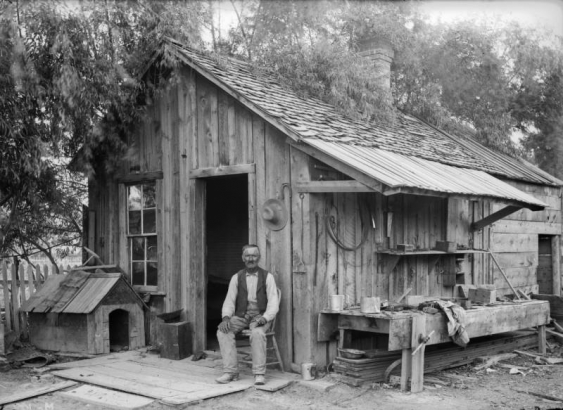 Besides capturing images of ranch life and people in western Colorado including many Utes, McKee was an experimenter and was one of the first people in the world to experiment with carnotite ore, native to the Western Slope and a source of radium which he used as a light source for some of his photographs. He took some of the first x-ray photographs, and was also interested in paleontology, guiding others to where fossils could be found.

McKee brought the first motion picture equipment to Western Colorado in 1895, a Kinetoscope which he exhibited extensively all over the state. When the Rio Grande Southern Railroad laid tracks through Lost Canyon between Dolores and Mancos in 1892 he hired out as messenger on the railroad and made views along the right of way with his wetplate camera.

McKee's work is also important because he captured some of the first photographs of Mesa Verde, taken during the summer of 1900, six years before President Theodore Roosevelt declared the area a National Park. He describes in his writings how he had to haul his glass plate negatives, heavy wooden box camera, developing chemicals and trays through the rugged desert terrain and do his developing in the middle of the night, inside the ruins themselves, to get the maximum darkness. 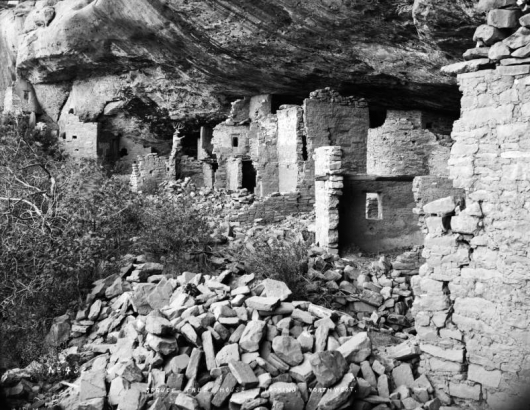 Thomas Michael McKee, born in Scary Creek, Putnam County, West Virginia, on March 17, 1854, died in 1939, in Montrose, Colorado. Thomas was the first of his family to be born in the United States, and shortly after his birth his family moved to Nashville, Tennessee. He studied painting and photography in St. Louis, Missouri, and worked as an express messenger for various Texas railroads. He was married to Amanda S. Kauffman in Abeline, Texas on December 16,1885, and settled in Montrose, Colorado in 1887. Here is the gravestone of Patrick McKee, Thomas' father.

The Denver Public Library acquired the Thomas McKee album in 1940, after years of friendship with Ina T. Aulls, the manager of the Western History Collection in the 30s and 40s, who arranged for the Library to purchase it from the family. The entire album of 386 images is available to explore, here: C Photo Album 103; Thomas M. McKee Album, in our Digital Collections. In it you will see photos of ranch life, town life in Montrose, hunting and fishing, and of course, great shots of the Anasazi ruins in Mesa Verde.

Material for this synopsis was gleaned from "Photographers of the Frontier West," by Ralph Andrews, and "History of the Mesa Verde Ruins" by Thomas Michael McKee.

Amazing photographs! Thank you for sharing these jewels.

The B. Ware and I. Steele Store is almost as good as the mythical law firm Dewey, Cheathem and Howe.

Thanks ~ Dewey, Cheathem and Howe - hilarious!

The fictional Law Firm of Dewey, Cheatham and Howe is part of the humor of Ray and Tom Magliozzi on their radio show "Car Talk". Now in reruns they can be heard on National Public Radio.