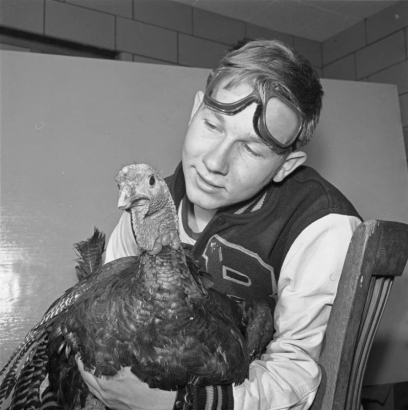 "We'd like to invite you over for Thanksgiving dinner." Is that what this young man told this turkey back in the late 1960's? That's just one of many difficult-to-answer questions that are brought up by this late 1960's photograph by Lloyd Rule (Z-11869).

Is this turkey a pet? Giving the loving look on the teenager's face, that's a distinct possibility. It's also possible that he's picturing his friend dressed and stuffed on a table filled with a sumptuous holiday feast.

Is the turkey a school mascot of some kind that's being watched over by a letterman? We'll discount that theory because, as far as we know, there is not and has never been a Colorado high school with a turkey mascot.

And what are the goggles for? Is the young man dreaming of taking flight with his feathered friend? Not likely, as turkeys are flightless birds (though a fellow can always dream).

The bottom line here is that this photo, like so many others in our vast Digital Collections, is a mystery that's waiting for some enterprising researcher to solve. Our catalogers do their best to put pictures like this in context and to describe them in a manner that makes them as accessible as possible to the researchers who want to solve this kind of mystery.

So until that perfect researcher comes along, this photo of a boy and his turkey will remain mired in the mysteries of time. (But we think he probably wound up on the Thanksgiving table!)

By the feathers and colors and markings, it seems likely this is a wild turkey, and wild turkeys can and do fly, by the way. I believe domestic turkeys especially in modern agribusiness are bred and fed for excessive weight, which contributes to their lack of flight. My guess is wild turkeys were much more scarce in the 1960's. Were there any groups working on conservation or wildlife rehab at that time?

Interesting take, Lisa. I hadn't even considered that, though it makes a lot of sense. I don't know of any specific efforts to conserve wild turkeys during that era, but that's definitely worth looking into. Thanks for the great comment!