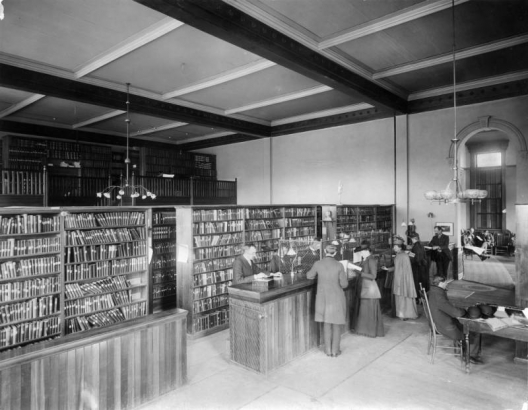 Walk into any public library in the country and you'll find open book stacks that are perfect for browsing; popular materials that are appealing to a wide range of users; and dedicated children's book areas.

What most people probably don't realize is that these now-familiar concepts were pioneered by Denver's first City Librarian, John Cotton Dana.

Dana, who is widely credited as the Father of the Modern Library, used DPL as a laboratory to test out his idea that public libraries should offer materials that appealed to the general population rather than a small, educated elite.

This concept, which seems so benign today, was off-the-charts radical when Dana accepted the position of Librarian and Head of the Board of Education in 1899.

Back then, most libraries were more like museums. With their locked shelves full of treasures that never left the building, they appealed only to a very narrow segment of the population. Cotton threw these ideas out the window and opened Denver's library to the actual people of the city of Denver (and that included the children of Denver, too).

In fact, Denver Public Library was the first library in the world to open a dedicated room for its collection of children's books. This ground-breaking step forward was widely criticized by elitists who thought children could not be trusted with the 3,000 books in DPL's new Children's Room. But Dana, and the good children of the Mile High City, proved the naysayers wrong.

After 18 months of operation, Dana's experiment was deemed a success. In a report quoted in Chalmers Hadley's 1943 book, John Cotton Dana: A Sketch, Dana said:

After the room had been open about eighteen months and approximately 90,000 volumes had been lent, a careful count showed that only 100 volumes were missing. It seems to demonstrate that the plan of giving them their own quarters, with their own books, and allowing them to browse there at will, without supervision, can be trusted with public property.

While Dana would no doubt be quite pleased to see how his idea for children's libraries took off, he certainly would not approve of that mainstay of children's librarianship, story time. Dana was adamant in his belief that children should use the library on their own and saw story time as an obstacle to that goal.

But don't let Dana's forward-thinking views lull you into thinking he was some sort of touchy-feely proto-hippie. Dana was very much a 19th Century man who held his staff to the same high professional and personal standards he set for himself.

Hadley recalls the following anecdote in which Mr. Dana chides a librarian who shows up to work with a bit of stubble:

'No time to shave this morning?'

'I hope to grow a beautiful beard,' the assistant replied, to which Mr. Dana remarked:

'You cannot raise a beard on library time,' and the incipient beard disappeared that noon.

Indeed, his legacy lives on in the form of large amounts of popular materials such as DVDs, CDs, and graphic novels that line the open stacks at DPL's 26 branch libraries today. Though some modern critics turn their noses at mainstream content, Dana wouldn't mind it at all.

He preferred books that people actually read over the rare books most libraries of his day housed. In fact, he was often quoted saying:

The worth of a book is in its use...the lending department of a library reaches its highest degree of usefulness when its shelves are empty and all its books are in the hands of readers.

Denver has every reason to be proud of its connection to J.C. Dana and the birth of public libraries that endeavor to serve their communities' wants and needs, rather than dictating them.

It really is an amazing story and something we can really be proud of.

I would be pleased for such a young city to have the oldest public children's room, but the claim didn't seem likely. A quick search led to a children's room in Boston in 1895 (http://www.bpl.org/general/firsts.htm), which strikes me as much more likely both by date and location.

Hi Lisa and thanks for your comment and question.

I did run into other libraries that claimed to have the first children's rooms but none of them (including Boston) cited any sources to back up their claim. I found multiple sources to back up our boast, including - but not limited to- this history of Dana from the Newark Public Library where he worked after leaving Denver  (http://www.npl.org/Pages/AboutLibrary/JohnCottonDana.pdf).

That said, I would be careful ascribing historical firsts based only on date and location, or by how young a city happens to be.

For example, women in young cities like Denver and Cheyenne were granted the right to vote 1869 and 1893 respectively. The women of venerable Boston, Mass. were not granted that right until a Constitutional Amendment provided them with it in 1920.

Even better, Colorado's suffrage law was voted on by the men of Colorado and not forced by Federal law.

In short, we feel like we're standing on pretty solid ground when we say DPL had the first children's library room and that young cities have contributed more firsts to American history than most of us might think.

Thanks again both for reading our blog and for your inquisitive nature (it keeps us on our toes!).