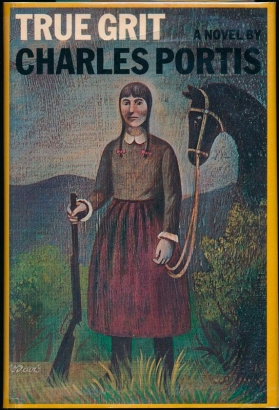 On February 17, 2020, the world lost a true literary giant. Charles Portis, who is probably most well-known for writing the classic Western novel True Grit died Tuesday at the age of 86. Portis started his career working for the Arkansas Gazette and eventually the New York Herald Tribune. After leaving his journalism career in 1964, Portis began writing fiction full-time.

Portis published his first novel, Norwood, in 1966 through Simon & Schuster. It was eventually adapted into a film starring Glen Campbell, Kim Darby and football player Joe Namath. In 1968, Portis published his masterpiece, True Grit. Many critics and fans alike, including myself, see this book as a near-perfect novel.

True Grit tells the story of Mattie Ross who, as an elderly woman, recounts when she, at the age of 14, sought revenge for the death of her father who was gunned down one evening by the outlaw Tom Chaney. Through a series of events, Ross hires a drunken Deputy Marshall named Ruben J. “Rooster” Cogburn to help track and kill Chaney, who has aligned himself with the “Lucky” Ned Pepper Outlaw Gang. The two are eventually joined by a Texas Ranger named LaBoeuf who is tracking Chaney for a crime he committed in Texas.

The tale is at times humorous as well as heartfelt. The three companions eventually develop a friendship and appreciation for each other by the story’s end. The book moves quickly and is well-written, with great dialogue setting many of the scenes. 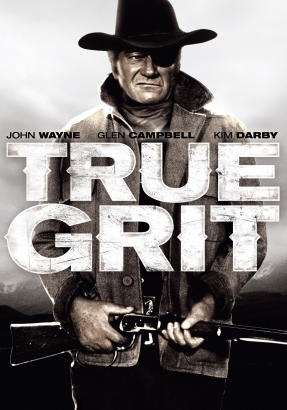 Almost from the moment the book was published, it became a bestseller. Through the decades, True Grit has remained popular. This is in large part due to the book being adapted into two Hollywood films. The first adaptation was released in 1969 and starred Kim Darby as the heroine Mattie Ross, Robert Duvall as “Lucky” Ned Pepper, Glen Campbell as LaBoeuf, Jeff Corey as Tom Chaney and John Wayne as Rooster Cogburn. Wayne’s role as Cogburn won him an Academy Award for Best Actor. In 1975, Wayne reprised his role in the aptly titled sequel, Rooster Cogburn. 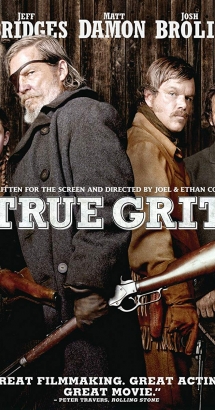 True Grit received the Hollywood treatment once more in 2010 under the guidance of acclaimed directors Joel and Ethan Coen. It starred Halee Steinfeld as Ross, Matt Damon as LaBoeuf, Barry Pepper as “Lucky” Ned, Josh Brolin as Tom Chaney and Jeff Bridges as Cogburn. Bridges was nominated for an Academy Award, but unlike Wayne, he did not win.

Search the catalog to see DPL's holdings of Charles Portis's work and be sure to check out the DPL Westerns Core Collection.

One of my all-time favorite reads, great characters and dialogue!

It is truly a perfect book.

True Grit was filmed on location in Ouray County. One building in Ridgeway was a film set construct, and is still in use. Lots of Colorado connection.

Keep in mind, though, that the Colorado locations were not really very realistic. The remake, shot in New Mexico and Texas as I recall, was more realistic. The story takes place in the low mountains of western Arkansas and eastern Oklahoma.