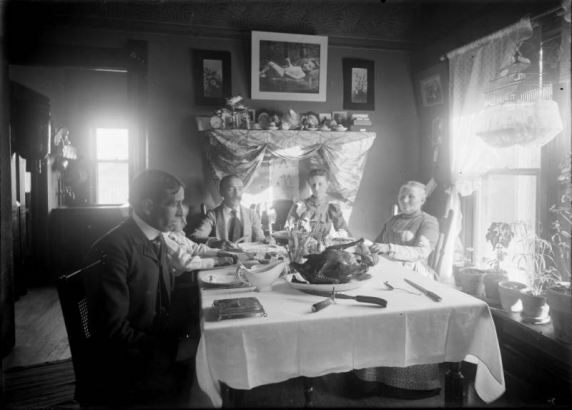 One of the really nice things about traditions is that, by definition, they don't really change much over the years. That's one of the many things we love about this picture dated 1890-1910 (that and the wonderful celery centerpiece).

The fact is that this table setting really isn't all that different from the one that thousands of families saw on Christmas and millions more saw on Thanksgiving.

Of course a late 19th/early 20th century holiday meal table isn't necessarily a mirror image of a 21st century meal. You'll notice right away that these folks are enjoying a relatively simple spread with a bird that would seem puny when seated next to the massive, factory-produced birds we roast today.

At the same time, it's not hard to believe that this meal was certainly as tasty as anything that was served up this holiday season.

In a world where change seems to be moving at breakneck speed, traditions of all kinds help keep us tethered to the people and places that form our personal stories. So here's a sincere hope that the descendents of the people in this photo enjoyed a similar meal this holiday season. After all, it's a tradition.

What a great picture! You can almost make out the date on the calendar in the background. Alas, not quite. It is really nice to see that some things haven't changed.

So close...and yet so far! I think I broke an eyeball trying to read the year on that!

I live in Capitol Hill and I often try to imagine what life was like inside the neighborhood Denver Squares at the turn of the century. This picture gives a good insight into it. Thanks.

It really is an enchanting photo. Thanks for reading and Happy New Year!

In the late 19th-early 20th Century Denver homes had gaslights as well as wiring for electric lights. (Electricity wasn't proven at the time.) I learned this from Denver electrician 20+ years ago.

It's interesting to see how the pace of technological and societal change really started picking up during that period...and hasn't slowed down since. Thanks for the comment!