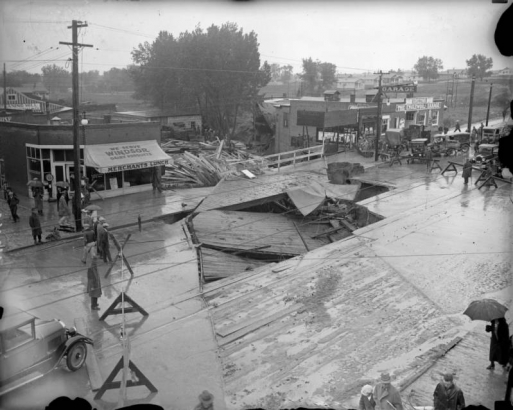 "April showers bring May flowers" is an expression that's much older than anyone currently reading this blog. In bone-dry Denver, however, those April (and May and June showers) can also bring a fair amount of genuine chaos.

Take, for example, this 1927 Harry Mellon Rhoads photo (Rh-394) that was snapped at the intersection of S. Broadway and Hampden. Longtime Denverites probably know that this part of town seems particularly prone to flooding during rains. A stretch of nearby Alameda floods so regularly that it is sometimes referred to as "Alameda Falls."

In this particular photo, the bridge has caved in and an abundance of water is the likely culprit. In the background of the photo sharp-eyed readers can observe a pile of lumber and a washed out building or two. This pile of debris could possibly have been washed away from one of the nearby lumber yards.

April showers, it turns out, are something of a mixed blessing in the Mile High City. Without a fair amount of accumulated moisture during the winter and early spring, a summer drought is a near certainty. Too much rain in one shot, however, can frequently be more than this old prairie town can handle.

As always, I enjoy your posts here. One thing I might question is whether you could call Alameda "nearby" to Broadway and Hampden. It's a bit over 4 miles away. Anyway, I wonder if you know whether, at this time in history, Englewood was more or less a free-standing town of its own or was it pretty much contiguous with Denver. The picture here makes it look like it's out in the country.

Hi Jude - Thanks for insights. You're definitely right to say that these two locations are somewhat distant from one another. The point I was trying to make (but clearly didn't really make at all!) is that there are these weird spots in the city that are very prone to flooding.

As for Englewood, like much of what we think of as the South Metro Area today was very much the country in Denver's past.

Thanks again for reading and discussing!

The thing that's interesting about Denver is that even though this part of Englewood was in "the country", it was still on the same street grid as Denver, meaning it was still Broadway even "way out there". You see this in the way that many of the the same north/south streets at the north end of the metro area are the same as in the south; e.g. you can find Downing, Clarkson, Washington, etc. in Thornton, Capitol Hill, and Littleton; and of course there's the famous Colfax Ave., the longest continuous street in the U.S. It seems like many other cities have dozens of different grids because each of the towns that got absorbed into the metro areas had their own separate grid system, or else post-WWII developers all established separate grids for their developments within the metro areas.

Hi Jude - That's a very interesting observation. It's the kind of thing we all experience but don't really notice. Thanks for sharing it with us!

Thanks for posting this picture. I "LOVE" looking at old Colorado pictures!

Hi HIL - Glad to hear you enjoy them! We've got a few hundred thousand in our collection, so we'll never run short of material!