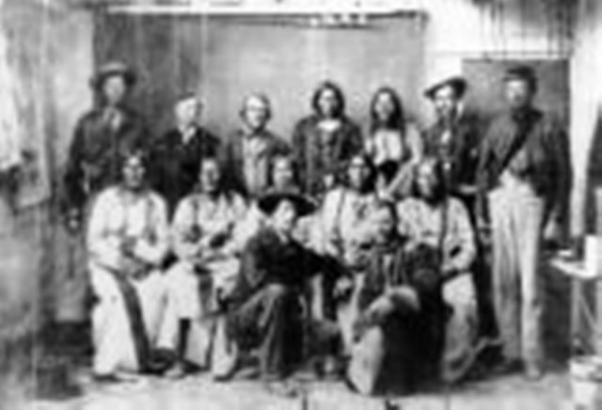 Today marks the 148th anniversary of the Sand Creek Massacre, one of the most unfortunate events in Colorado and United States history. On November 29, 1864, 700 troops led by Colonel John M. Chivington attacked a village of Cheyenne and Arapahoe at dawn. Though the Cheyenne chief Black Kettle waved an American flag and the white flag of surrender, United States soldiers killed approximately 200 men, women and children. Initially reported by Chivington and the Rocky Mountain News as a stirring victory over stalwart Indian forces, people soon realized that the attack on the American Indians at Sand Creek was in fact a slaughter. Major Silas Soule refused to participate in the attack, and was later shot and killed for publicly condemning Chivington. Although not present at Sand Creek, Major Edward Wynkoop also condemned the massacre. Western History and Genealogy has papers and photographs of the villains, heroes, and the victims. Search our online finding aids for the papers of Soule and Chivington. Search our Digital Collections for Sand Creek related photographs. Search our Western History and Subject Index for related newspaper articles from that time. Click here and here for information about the above photos.

Who writes these
Hello, our library staff write these research guides. Please let us know if you have any further questions.