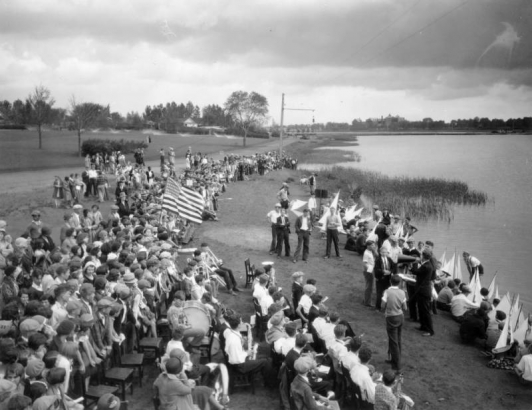 Springtime in the Rockies means different things to different people, but the opportunities for springtime sailing within the city limits of Denver are limited at best. That lack of open water was hardly an obstacle for the students of Lake Junior High during the early 20th century, when they participated in the Lake Junior High Spring Regatta.

The Regatta was held on Sloan Lake (commonly referred to as Sloan's Lake), a body of water that's not necessarily known as a sailing mecca. To accommodate the nautical skills of the average Denver-area junior high student, the boats in this race were strictly of the model variety (Hey, it's Denver after all).

Current residents of the Mile High City might be taken aback by what's clearly missing from this photo—the Denver Skyline. During the pre-war years, Denver's skyline did not dominate the horizon the way it does today. While there were certainly noteworthy buildings such as the Brown Palace, the Equity Building, and Daniels & Fisher Tower on the skyline, they weren't quite visible from faraway Sloan Lake.

While Sloan Lake doesn't host many sailboat regattas these days, it is the home of the Colorado Dragon Boat Festival and its small dock is filled with water skiing boats. In landlocked, urban Denver, that's a whole lot of boating.

If you love historic pictures of Denver, why not like the Western History and Genealogy Facebook Page?

Growing up on Lake Mi. I found lakes like Sloans to be ponds. Then I realized Lake Mi. was a huge lake and Sloans was a normal sized lake.
I enjoyed the picture and analysis of the Denver skyline.

Hi WRT - I completely understand that feeling. Denverites experience that same phenomenon when they visit ski mountains in places like New York and Wisconsin! Thanks for reading and commenting!

But the lakes...oh the lakes! (They really are gorgeous.)

Growing up in Minnesota I was used to a lot of lakes in town and up north where we would go to fish in many places.

Hi Wade - Those Upper Midwest lakes are, indeed, a thing of beauty. (They're also better for summer swimming than most of our bodies of water around these parts!)