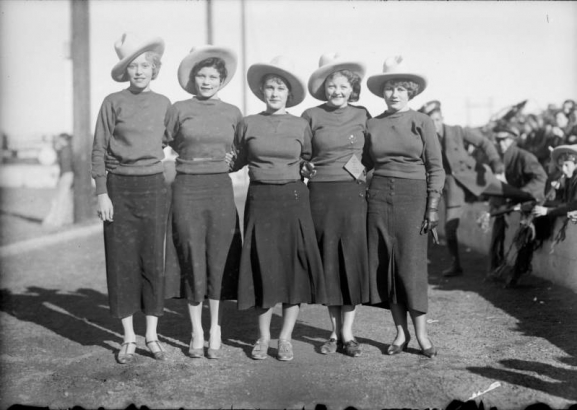 It's no secret that the Rocky Mountain West is a hotbed of football fandom. After all, the Mile-High City is home to a rather beloved professional football team whose fans stretch far beyond the Front Range.

Besides the the Denver Broncos, the Rocky Mountain West is home to some pretty solid college football programs, with the University of Colorado Boulder Buffaloes, the University of Northern Colorado Bears, the Colorado State University Rams, the Air Force Academy Falcons and the University of Wyoming Cowboys or "Pokes." And that's where the young women pictured in today's Wow Photo Wednesday (Rh-718) led the crowds in school spirit sometime between 1910-1920.

Located in Laramie, the University of Wyoming has only had a football program since 1892 and played its home games on Corbett Field until 1950, when War Memorial Stadium was built.

But it's not just the elevation that makes this picture stand out to the modern viewer. If you take a moment to compare the cheerleaders of this era to the cheerleaders of today, some obvious differences stand out. First off, their attire is less suited for athletic movements than the outfits the cheerleaders of today wear. Besides social taboos against showing excessive skin, it's pretty clear that these women were probably not doing cartwheels or making human pyramids in these long dresses, flats, and floppy hats.

You'll also notice that the second cheerleader from the right is holding a small, presumably-toy-but-very-realistic, pistol in her hand. That's a prop that's unlikely to appear at War Memorial or any other college football stadium anytime soon.

But, whatever the differences, it's pretty clear that the Wyoming cheerleaders of yesteryear are enjoying the festive atmosphere of college game day every bit as much as we're still enjoying it today. And, for the record, the Pokes are currently 2-2 overall and 1-0 in conference play for the 2017 season.

Another reason for covering up in Laramie is that game days can sometimes be below zero, even in September.

Yes! And this is why I am always shocked when University of Hawaii plays competitively in Laramie!

At one time D.U. and Regis had football teams. An early Green Bay Packers quarterback Arnie Herber, played football at what was then Regis College.

I have fond memories of snowball fights in the stands at War Memorial!