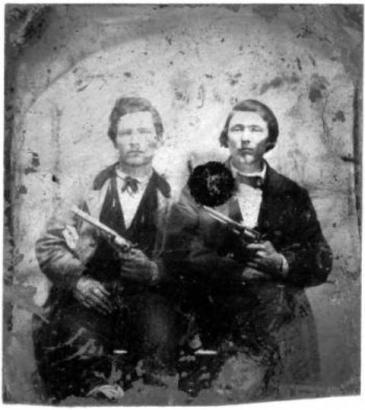 Frank James (1843-1915) and Jesse James (1847-1882) were both born in Clay County, Missouri. The brothers, through legend, became two of the most celebrated outlaws of all time. But before they were known for robbing trains, looting banks, and evading authorities they took part in two of bloodiest massacres in the history of the United States.

During the Civil War, Frank and Jesse fought in favor of the Confederacy. They were guerilla Bushwhackers who rode with the notorious “Bloody” Bill Anderson and William Quantrill’s Raiders. While riding with Quantrill, strong circumstantial evidence suggests both brothers were part of the heinous Lawrence Massacre in Lawrence, Kansas. On a warm summer evening in August 1863, William Quantrill and between 300-400 of his Raiders rode into the town of Lawrence hell bent on destroying the pro-Union stronghold. As the Raiders descended upon the town, they began torching homes and other structures laying to waste more than a quarter of the towns buildings. They looted the banks and massacred 185-200 men and boys. Around 9 A.M., the murderers rode out of the smoldering city splitting up to avoid any Union soldiers pursuit.

Now riding with "Bloody" Bill Anderson in 1864, Frank and Jesse James took part in yet another massacre. On September 27, “Bloody” Bill, the James boys, and 80 confederate guerillas moved into Centralia, Missouri and blocked the town’s rail line. After stopping an approaching train, the guerilla’s boarded it and saw that several of the passengers were Union troops heading north to their homes after the Battle of Atlanta. After separating the civilians from the enlisted men, Anderson ordered the 23 Union troops off the train. Anderson called for an officer to step forward, and bravely, Union Sergeant Thomas Goodman did. After Goodman stepped forward, the guerillas gunned down the other 22 men. Following the bloodbath, the 22 corpses were maimed and scalped, the depot was torched, and the train was set ablaze and sent hurling down the tracks toward Sturgeon, Missouri. After the slaughter, the guerillas were pursued by 155 Union troops. After catching up to the confederates, the two groups were thrown into battle with the guerillas mowing down the Federal soldiers with their revolvers as they overran them on horseback. All the Union troops who tried to surrender, more than 100, were gunned down where they stood. Soon after the battle, “Bloody” Bill Anderson died and the James boys would go their separate ways. At the end of the Civil War, Frank and Jesse would reunite, form the James-Younger Gang, and ride into infamy.