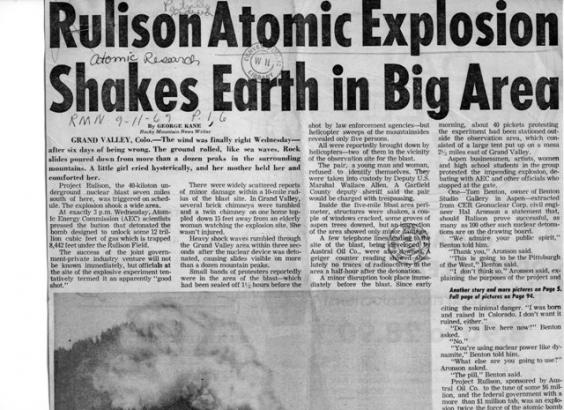 From A-Bombs to Fracking in Mining

On September 10, 1969, the Atomic Energy Commission (AEC), in order to release natural gas deposits locked underground, exploded a 40-kiloton atomic bomb on Colorado’s Western Slope in what it called "Project Rulison." The AEC and its civilian partner Austral Oil Company assured the public of both the project’s safety and profitability. And the explosion did succeed in releasing large amounts of natural gas, increasing production rapidly. The blast was so successful that more blasts took place near Meeker and elsewhere in the West. In fact, in the above article, “Decade of A-Blasts Forecast,” industry representatives and experts from the AEC are quoted as telling Governor John Love’s task force that beginning in 1972, the atomic bomb could be employed in gas production “as often as 40 times per day." Yet Austral Oil Company never did make a profit on Project Rulison and the A-bomb did not turn into the mining wave of the future. It turns out the natural gas harvested was too radioactive for public use. The Project Rulison blast site was sealed, and no one thought anymore of it… until 2009 when Noble Energy decided they wanted to drill for gas around the blast site and the Garfield County commissioners protested (“Rifle Drilling Advances,” Denver Post, 12-25-2009).