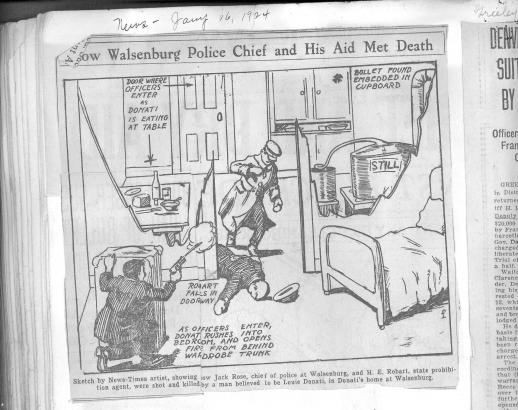 James W. Melrose was a Colorado State Prohibition Agent during Prohibition, not an FBI man or a "dry sleuth" or any of the other titles given him by newspapers.  He was very active in his enforcement duties.  His wife, Allene Melrose, kept a scrapbook of his activities from 1922 to 1924.  He raided stills, stopped cars and trucks of bootleggers, discovered caches of booze hidden in cellars, even ended the East High School flow of illegal liquor.  Melrose's exploits included arresting the farmers with drunk hogs (no, they couldn't dispose of the evidence that way) and chasing a man with a pint of moonshine down a movie theater aisle.  Setting up "sting" operations where he bought liquor then arrested the seller was common.

Melrose and his wife had a daughter named Frances Melrose who grew up and wrote her own stories of dramatic Colorado events for the Rocky Mountain News.  She kept the scrapbook of her father's career.  It may be viewed among her papers (WH995) on the 5th floor, Western History/Genealogy Department, of the Central Branch of the Denver Public Library.