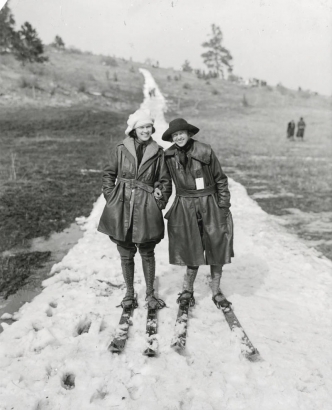 What do you do when there's not quite enough snow to ski on? Just break out a shovel and make your own DIY ski course.

That's what the folks in this picture from sometime around 1940 were doing up in Genesee Park. We don't have a lot of context for this photo, but it's clear that someone put in a lot of work to get this miniature ski path into skiable shape.

While a ski track in a public park might seem as unusual today as the knee-high ski boots in the pictures, Denver's Mountain Parks have always been pretty unique.

Genesee Park, founded in 1912 as Denver's first Mountain Park, is home to the City of Denver's bison and elk herds, along with other wildlife. Denver's largest Mountain Park also features several buildings that were built by the Civilian Conservation Corps, as well as Chief Hosa Lodge.

Even though we probably won't see a ski run like this at Genesee any time soon, the people of the City of Denver are extraordinarily fortunate to live in a city whose parks system extends beyond its borders into the foot of the Rocky Mountains.

So many mysteries like that remain. Thanks for reading and commenting!

IN researching the Moffat Road I read that one summer while the Road was under construction, railcar gondolas brought snow from around the summit and deposited it at the post office, for the enjoyment of Denver.

Hi Pamela - Dig around at Digital.denverlibrary.org and you'll find plenty of pictures, like this one by Harry Rhoades, of that snow haul. Thanks for reading and commenting!