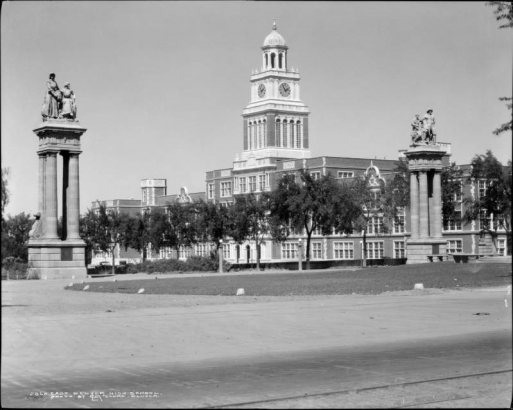 No one would accuse Denverites of lacking school spirit and school pride – particularly pride surrounding their four directional high schools.

Newcomers to the city are quickly made aware of the monolithic schools – Denver North, Denver South, Denver East and Denver West. The buildings themselves (all of which are designated landmarks) radiate a sense of history and tradition. Although not a directional high school, Manual High School is one of Denver's oldest high schools, and can trace its roots to Denver's earliest days.

And with the oldest (Denver West) and second oldest (Denver East) high school alumni associations in the country, it is no wonder that Denver’s public high schools are steeped in tradition that rivals many colleges.

But even lifelong Denver residents may not know about the evolution of these iconic high schools – or that their origins are as old as Denver itself. 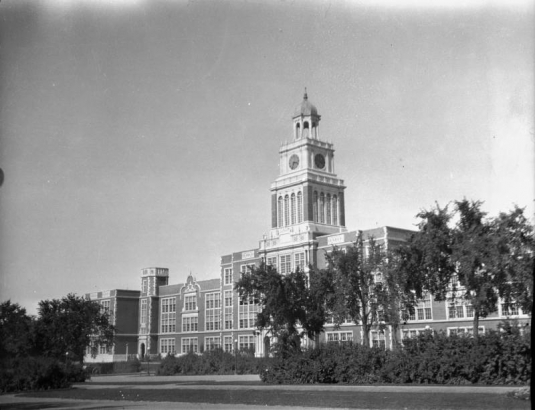 East High School owes its existence to the first school in Denver. Union School was a one room schoolhouse built in Denver City in 1859, only a year after the city was founded. The school was built partially to promote Denver City over the rival towns of St. Charles, Harman, Auraria, and Highland - all of which would be annexed by Denver City to form the Denver we know today.

Roeschlaub wanted to carve the face of a young girl into the new building's cornerstone to symbolize Denver High School's dedication to youth. He held a child beauty pageant to find the model, which was won by six-year-old Ella Matty. Observers said young Ella had the face of an angel, and she is remembered today as the school's mascot.

The cornerstone was saved when the building was demolished, and visitors can still see Ella Matty, the "East High Angel," on the current campus.

The original Denver High School was known by a variety of names. It was most commonly called Denver East Side to differentiate it from Denver West Side High School and Denver North Side High School, which were both built in 1883.

Denver saw an economic and population boom in the 1920s, and city planners took advantage of the need for expanded high schools to further the "City Beautiful" project envisioned by former Mayor Robert Speer, who passed away in 1918.

The school's architect, George Herbard Williamson, was himself a graduate of the original East Side High School. He won national acclaim for the school, which was based in part on Philadelphia's Independence Hall.

Denver East High School as it stands today opened its doors in the fall of 1925. Since then, a myriad of exceptional Denverites - including Apollo 13 Astronaut Jack Swigert and Oscar nominee Don Cheadle - have attended East. 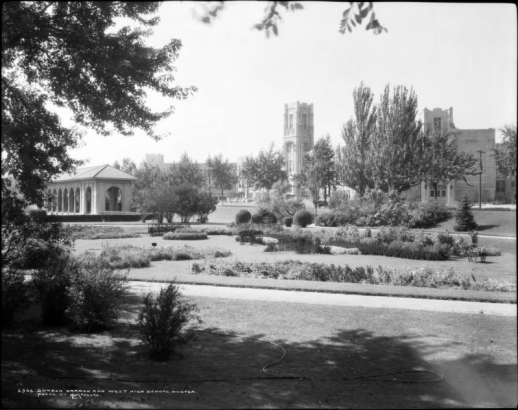 In 1926, West High School became involved in the City Beautiful project. The school was moved to Sunken Garden Park, in keeping with former mayor Robert Speer's vision to have each of the four directional high schools associated with a major park in one of Denver's four quadrants.

In 2012, West High School was replaced by the West Leadership Academy and the West Generation Academy to better suit the needs of West Denver students. The West Leadership Academy has a focus on college preparation, and the West Generation Academy highlights vocational and career training. Both academies operate in the 1926 Denver West High School building. 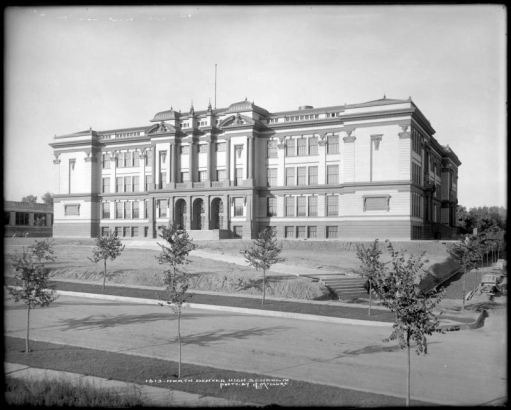 The pre-Denver town of Highland (now the Highlands neighborhood) was served by a single one room school, the Ashland school, built in 1872.

Responding to a rapidly growing population, Highland built its own separate high school in 1883. Although Highland was not part of Denver, the high school was part of the Denver Public School system and served Denverites as well as Highlanders. Named the Denver North Side High School, it was the first Denver public high school to officially use a directional name.

The original Denver North Side High School boasted a single teacher for all grades. The first Denver North Side class graduated in 1886. The class was entirely female, and earned a class average (98%) that has yet to be topped by any following graduating class.

When Highland joined the town of Denver in 1896, the high school saw a great increase in students. A new building was built in 1911 to accommodate growing class sizes. The school took Denver North High School as its name, dropping the "Side." The other directional high schools would later follow suit.

The school bordered Highland Park, and as such was not rebuilt in the 1920s. North High School was determined large enough and beautiful enough that it did not need to be redone during the City Beautiful project.

The North High School building is as striking today in the modern Highlands as it was when it opened its doors over one hundred years ago. Israeli Prime Minister Golda Meir and Colorado historian Caroline Bancroft are among North High School's notable alumni. 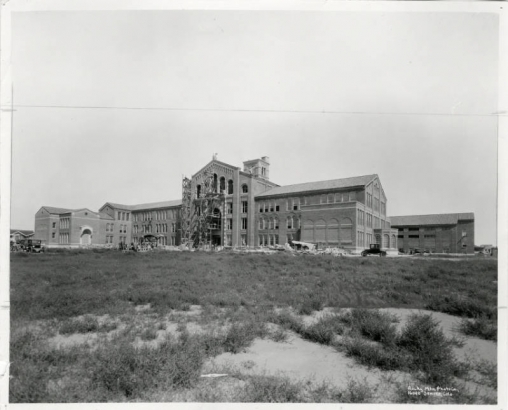 Although it is the newest of the directional high schools, Denver South High School has a tradition that stretches back to Denver's earliest days. Like East, South High School developed out of Denver City's Union School.

Since Denver's south side was the least populous in the city's early days, the area did not get its own school until 1883. This school was called the Grant School and served all elementary through high school students.

In 1907, a separate junior and senior high school was added to Grant School. Although the school was still part of Grant, it was unofficially known as the Denver South Side High School. In 1919, the junior and high schools at Grant split into separate buildings.

The new high school building was built bordering Washington Park, and was designed by the prominent Denver architecture firm Fisher and Fisher. The building is inspired by the Basilica of Santa Maria Cosmedin in Rome, a church famous for housing the skull of St. Valentine. 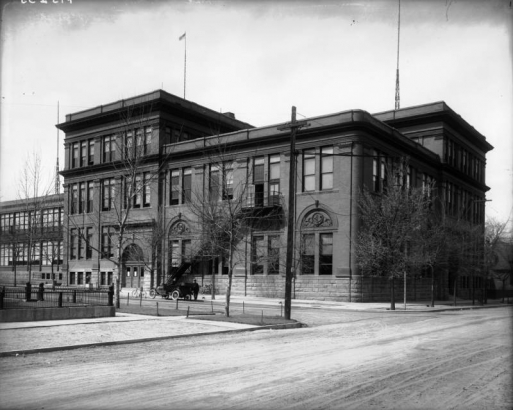 Although Manual High School is not a directional school, it is one of Denver's oldest high schools, and grew out of East High School. By the late 1880s, it became apparent that East did not adequately prepare students in what was called manual training - practical skills such as woodworking and metalworking. As the east side of Denver continued to expand, a second high school in the area became increasingly necessary. Teachers at East High School developed a program to emphasize real world skills for students, and used this as the basis for Manual Training High School.

Manual Training High School was founded 1892, and was comprised mostly of East High students who wished to pursue practical training. The school was originally housed at East, and grew into its own building as more people moved to the area. Charles Bradley, assistant principal at East and a major proponent of the new school, took over as principal of Manual Training when the new high school building opened its doors in 1894.

As East Denver grew, Manual Training effectively served as a second area high school, and took on a more traditional high school curriculum over the decades.

In 1953, a fire destroyed the original Manual Training High School at 27th and Franklin. A new building was constructed at 28th and Gilpin, and in 1954 Manual High School opened its doors. The word "training" was dropped from the school's name to signify that the school had taken on studies beyond the manual training program.

Manual High School closed in 2006, but due to student protests and community outrage, it was reinstated the following year.

The Denver Public Library, Western History and Genealogy Department has a wealth of resources on Denver's publc schools.

Read up on the history of the schools or browse photographs in our digital collections.

Or come see us in person (5th floor of the Denver Central Library) for books, building histories, and archival collections!

Is there a reason why there's no discussion of how ethnic/racial housing patterns and segregation affected the ethnic and racial populations of the schools at various times in their history?

Is there a reason why there's no discussion of how ethnic/racial housing patterns and segregation affected the ethnic and racial populations of the schools at various times in their history?

Thank you for reading and commenting, Barbara!

This particular blog is intended to provide a brief introduction to the origins of Denver's oldest schools, and is not meant as a comprehensive history of each school. For a deeper look at the racial and ethnic segregation of Denver and its effect on schools, I would recommend the following blogs and histories:

As always, please contact us if we can help you find specific information about a particular neighborhood or school. We are happy to be of assistance!

Great article! Love reading about the history of Denver schools. Did see a typo in 3rd paragraph regarding East and West chronological order, specifically in parentheses. Thanks for sharing the info!

Another alum to add to the list of noteables: Deborah E. Foster-King, Archivist, US Army Reserve (1995 - present)