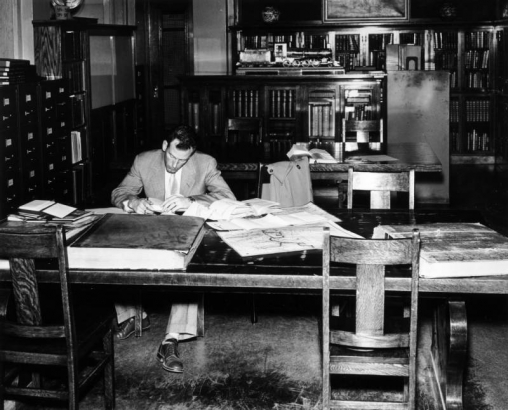 The people of Colorado are definitely living in a time of rapid change. From technological advances to a local population explosion to political upheaval, it's all happening very fast.

In this context, it's comforting to look at a picture of Denver Public Library's Western History Department circa 1938-1940. The man in this picture is doing something that our customers still do on a daily basis - good old-fashioned research.

Even better, a researcher who walks in our door today can not only access the same materials this man is likely using, they'll also be surrounded by many of the same objects.

For example, the Colorado Midland 9 Train model, which was built by Claude E. Harris and dated 1938, is still on display in front of our reference desk. And the table he's sitting at is still used on a daily basis in our Gates Reading Room. It was, in fact, one of the very few pieces of furniture that made the move from Colfax and Bannock and the 1995 renovation of DPL.

Sharp-eyed readers will notice a piece of pottery in the upper left corner of the picture that is adorned with we know today as swastikas. While the appearance of a swastika anywhere is a jarring experience today, it likely didn't raise much of a fuss when this photo was taken.

American Indians have long used this symbol to represent various meanings, including the Navajo, who refer to it as a Whirling Log. It was also used by the Celts, Greeks, Indians, and many other cultures throughout the centuries, before taking on a negative connotation in World War II.

In a world where change is speeding along at an uncomfortably fast pace, we invite everyone to slow down and experience a bit of the past by visiting the Western History and Genealogy Department. Whether you're digging in to some heavy research, or just taking a look at the art on the walls, it's likely to be time well spent.